I had a feeling that I was gonna use the article title a week ago when I came up with it. I just did not expect to see it come to light in the way shown in the final episode.

The entire first half is dedicated to the last stand of Tekkadan, with the tunnel successfully made, with the remainder of the family sans Akihiro and Mika escaping by the skin of their teeth. Despite being the finale to a Gundam show, the ultimate bookending battle is bereft of any ideological waxing of various ideas like understanding one another and becoming a better humanity. It is just Akihiro and Mika laying waste to the myriad grunts of Gjallarhorn as they delay them long enough for their comrades to escape. Due to this lack of high-falootin’ conversations, it means a long winding episode of this battle is not in the cards, and pretty much ends when Rustal lets loose one final barrage of Dainsleif weapons on their base. Once you see the Barbatos and Gusion damaged from this one attack, the battle is pretty much over. Yet within all the well-done one sided killing, there is some catharsis to be had. Akihiro crushes Iok to death after recognizing who he was, and thus gives us *A* scalp to have despite the aftermath ending with Julieta killing Mika, decapitating the Barbatos and showing the head off as a trophy for all to see.

Kinda daring and depressing in one go (darepressing?). It is daring since for the first time, the primary Gundam pilot in a Gundam series (not counting the MOVIE Char’s Counterattack) is killed. Yet it is depressing since well… this means the bad guy won. The ambition of McGillis and Tekkadan, which thought it could sally itself forth with Symbolism and Determination is swatted with impunity by a superior force. Everything that could’ve gone wrong went wrong, and the price is paid for it. Yet how can it be any other way?

McGillis was a broken man who, in his most impressionable period, lacked any peers (Tekkadan) or superiors (Rustal) to temper his ambition. Tekkadan by way of Orga and Mika were broken children who knew only to fight, even if they sought an appealing goal of leading their comrades to a promised land. They were so much these kinds of people that despite their stated goals, I could not (and I’m sure you couldn’t too) envision them in those final positions. McGillis would never be the kind of leader that would truly reform Gjallarhorn (would we even want him to?), Orga settling down sounds patently absurd, and Mika would have been kindof a shitty father (or not much of one given his condition). So… While sad, I understood that well-done if a bit expected and anticlimactic first half.

What I did not expect was the aftermath that followed.

Do I like said aftermath? I’m not exactly sure, but it seems consistent with the rug-pulling nature of the last part of the second season. Instead of the usual doubling down after a big conflict like when the Federation introduces the Titans after the One Year War/Operation Stardust in the Universal Century, the victorious Gjallarhorn through Rustal Elion does something completely different. It removes the Seven Star lineage system (since the Fareed, Issue, and Kujan lines are dead), implements democratic suffrage into the government (unsure of its efficacy since Rustal’s their first elected leader), and withdraws almost all its forces and influence on Mars. The result being is Mars becomes autonomous and self-governing enough to elect Kudelia as the chair of their new Martian Union.

I’ve been reading things since watching this how Rustal’s reformation of Gjallarhorn is a reflection of McGillis’s ideals. Yet, I cannot believe such due to the fact we never know McGillis’s finer details of reform. Given his backstory, never mind Tekkadan’s, his possible reign as leader of Gjallarhorn would have just continued the cycle. I mean, remember, how life just went on after the victory in Season 1, and also how he did not in the slightest bit dissolve the family structure of the system through his coup, and as a result, let it delegitimize him near the series end. Rustal is a bad man, and has even made it clear through a scene with Julieta in last week’s episode, yet he has never been shown to be a stupid man. ‘Democratizing’ Gjallarhorn never mind letting the Martian Union democratize is a bit of a misnomer given how the final scene with Galli-Galli and Julieta talk about how strings were and are being pulled for the leadership positions, with Julieta in the wings regarding taking over Gjallarhorn. He eventually sees the winds of change, what with the losses sustained during the “McGillis Fareed incident”, and acts accordingly.

Is this Okada’s way of saying how the endings to such tales may involve not getting what we want in the way we want it to, but get them anyway in ways we did not expect or want? I don’t know. It probably ought to have been Galli-Galli to implement the changes? Yet throughout the series, he is never shown to be a leader like Rustal and McGillis are, and also it would not be at all good for him to usurp the man who let him in when nobody else would, never mind continue further down a dark path for Gjallarhorn. Maybe it’s a sign, that sometimes change comes from unexpected places, and at times they do not come from the idealists, but from older pragmatists who know how the game is played. I guess it is like having your Deep State while draining enough of your swamp? I dunno, remember Rustal is also the guy who tried to quell an Arbrau uprising by placing a mole inside Earth Tekkadan and attempting to assassinate Makanai, never mind use the Dainsleifs on almost every one who looks at him funny. Note how he signs a treaty prohibiting Human Debris yet doesn’t reinforce how Gjallarhorn will once again no longer use WMDs like them again. I’m still unsure what to think of this. Did his arc change as the series went on, or did Okada plan this to be the end game like how Taniguchi already had his intentions for the winner of Code Geass R2’s final battle despite changes through the middle of the season? Will we ever know?

Who knows? The rest of the aftermath is welcome and desired given how much despite all their faults and foibles we want these characters who we’ve observed for 50 episodes find happiness. Highlights are Yukinojo and Merribit having kids, Dante running Kudelia’s orphanage, Eugene and Chad being Kudelia’s inner coterie, her Admoss Company is still doing well and of course Ride killing Nobliss. To be sure it is not TOO much a happy ending for Ride (now decked in Orga’s scarf and brandishing Mika’s gun), since he never got over what happened. Yet, they’re all bookending their lives in a way they (and we) thought would never happen. Then that final scene where we see Mika and Atra’s progeny, Akatsuki, alongside one final interaction with the survivors of the main quartet? A fine way to end this series, even if we don’t see any grown up Cookie and Cracker (would’ve been nice to see how they turned out), never mind a grown up Almiria who it would’ve been nice to see in light of Gjallarhorn’s ‘reform’. I cannot really say no to it.

Especially since there’s no dead Atra.

Overall: Eeeeeeeeh. I cannot really say Mobile Suit Gundam: Iron-Blooded Orphans Season 2 is a marked improvement over Season 1. It is not so much because of the way it ends, but the journey that leads to it. I would think Tekkadan in a position of power would mean more forward momentum but the entire series involves them cleaning up a lot of BS. The world of the Post Calamity era is an interesting one to say the least, yet all the lore seems to be casually shunted aside (like the Mobile Armour) due to the need to keep the main “Prince of Mars” plot ball rolling. At least with events like Dort, it plays into the bigger narrative how Kudelia’s plight is necessary and her need to get to Edmonton paramount. Here? Quell some space pirates; then have to close their Earth branch; destroy giant mobile armour; hitch their wagon to a failed rebellion; then die at their place of birth. Even their victories feel like cleaning up shit than actual moves from strength to strength. Sure they kinda ‘won’ in the end, but their wins only claw them back up to making up for what they’ve lost, with not many gains to be had.

Pride goeth before the fall I’m sure, but there’s not much in the slightest bit of pride to be had. Orga may have had more power this season, but he spent much of his time useless and waffling. I have learned to accept Mika for being Mika, yet from the way Orga acts I wonder why he even bothered. Not even the slightest bit of tension is to be had between them. Hell… there’s not even the slightest bit of tension to be had with the entirety of Tekkadan. Usually with these kinds of ensemble fighting team stories, there is always some animosity and strife to be had within its ranks. Yet in the entire second season they ALWAYS act like one cohesive unit. Perhaps this series suffers from a MASSIVE cast, and as a result they may have been forced to eschew the in-group conflict for conflicts with out-groups, but it is still felt. One of the allures of other Gundam shows is not just the conflict between opposing sides, but the conflict WITHIN the protagonist’s sides. Amuro always has his spats with Bright, as does Kamille. Protags like Heero and Setsuna have to work with a very incongruous cadre of pilots. Kira Yamato (before SEED Destiny) has to cope with anti-Coordinator sentiment and skepticism even if he was the only one who gave a Natural battleship a fighting chance to survive. Just because one group is in power doesn’t mean it solves all the internal problems which occurred when they weren’t in power. Yet it happens in Season 2 of Mobile Suit Gundam: Iron-Blooded Orphans.

And then there’s Hush, but he’s left to die with everything else.

It seems I should hate this, but no, I’m just tired. While there is a topflight production to be had, with likable lore, characters, and moments, and an ending which at least gives SOME pleasant resolution to the characters, this season just exhausted me. At least with the first season there is a direction to a hopeful future shown throughout its 25 episodes. Here? As I mentioned above, it does not feel like it, especially when every victory has no gain because the losses which start those battles are horrific. It numbs the impact of ending, it numbs the impact of the themes, and it numbs what is a good product. It is my hopes that the next Gundam series is a bit… less like this.

This was a noble experiment. I just wish it ended up with a better result. If you liked the First Season, you may as well give this a fair looksee and decide for yourself. If you’re a Gundam fan, you may as well… as well. It’s all here.

It will be interesting to see how this series is remembered. 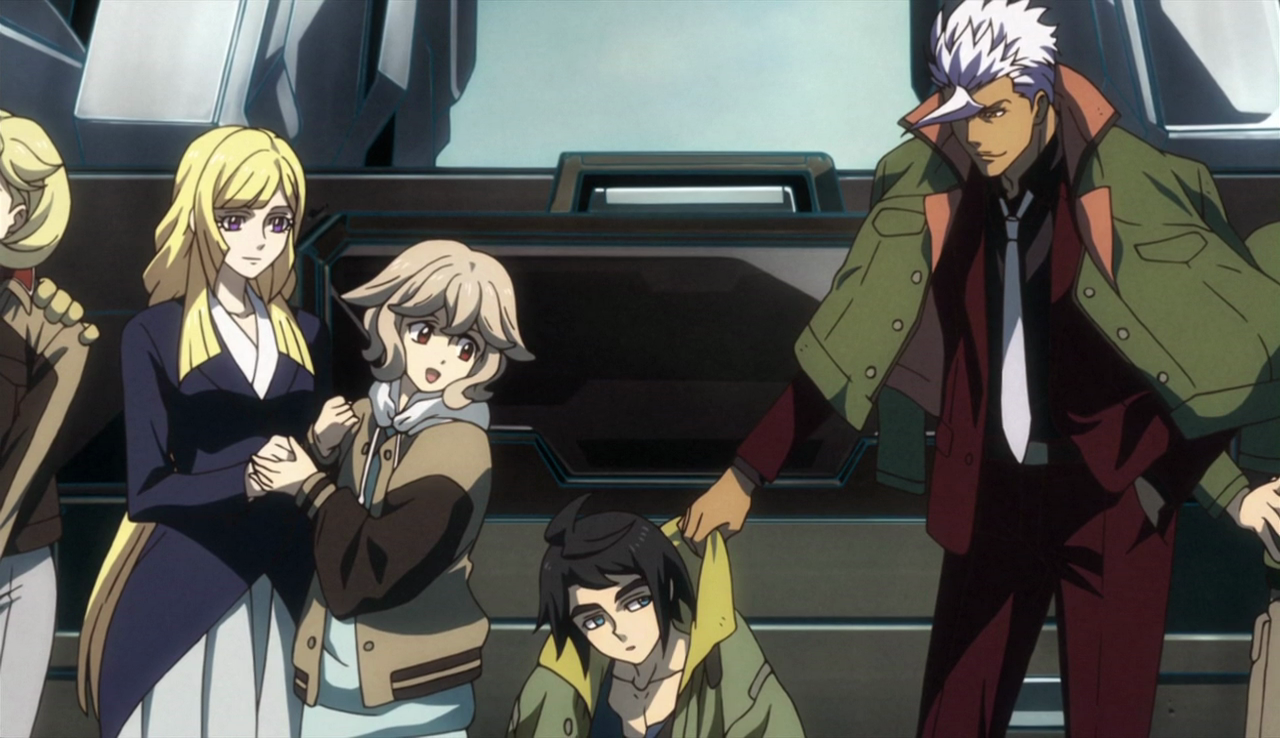