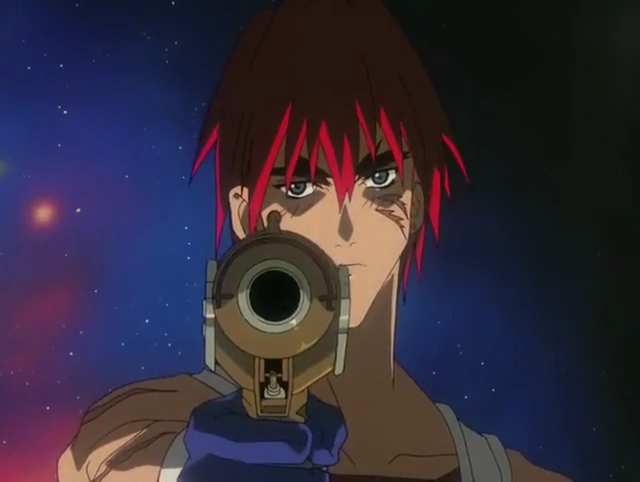 After the somewhat disappointing rote nature of the penultimate episode, the final one puts us right at the centre of the Leyline with all the surviving players. So I guess this is where the series puts us through the ringer of some revelations and an epic final battle that really gets the blood pumping, right?

The revelation of the Leyline itself is probably the least impressive part of the final episode. We not only get an encapsulation of what had been said between Khan and the McDougals a few episodes back, but also a general description how the Leyline is kinda sorta one big data configuration; a computer Shenron if you will for whoever unlocks it with the Melfina-sized key. The fun part though comes after Gene gets his Caster magic in Tao magic and Hazanko gets his Tao magic in Caster magic. Apparently it causes the Leyline to deign giving ALL of them a wish while they stand between life and death, and they all picked the most obvious choices. I guess that’s fine all things considered. We’ve not the time to think or be wary of the logic of the Leyline, so mysteriousness is instead amplified.

So obvious choices? Hazanko wants to be an all-powerful badass? This is fine. Khan wants information so badly he merges with the Leyline and is never seen again after he gets his wish? Also fine. Gene wants to be together with Melfina and her with him? Mmmm, fine? It’s within character for Gene since it lets him reveal how he committed fully to his promise to Melfina and find out who she is. Then again, this is a guy who gets loans up the wazoo from Fred he needs to pay off, never mind the mystery why his father died the way he did thanks to the McDougals. Granted the McDouglas might not have given two shits about who they were icing on that day, but it is impossible to tell unless we are told otherwise by a new series. It is kinda off-putting the absence of these desires in Gene when he has the opportunity to remedy them. On the other hand, it’s not given his arc through the series.

Or it could be I really wish we had more interactions between Gene and Melfina to make this part stick. I know the attraction was there, I know there have been many moments where they worked through it. Yet I don’t feel like there was enough of it to really stick. Not that it matters, since this is the end, so it’s nice to see them go all the way. We could’ve ended with a tease of possible romance, but they went full on with it.

What isn’t nice is the final battle, because to call it nice is an understatement. It is AWESOME. It’s one of those moments where one just FEELS the budget being well-spent while it throws one last spectacle to impress the audience. Hazanko falls of course, and his death is enjoyable in its grotesque violence. This is the first time I’ve ever seen it, and it blows my mind this series is twenty years old. The last time I’ve ever seen anything of this spectacle recently is the final episode of Space Dandy. It is exhilarating, and, if you haven’t watch it yet, worth waiting until the end to see it.

Speaking OF the end, there’s of course the final segment. With such an exceptional end battle, where does our troupe end up?

Back to Square One with shorter hair (at least on Gene’s part). The gang may have entered the Leyline, but business as usual still reigns in the real world. What does that mean? It means paying your dues by way of jailtime, getting further into debt with Fred Luo, and above all else going out into adventure. For some reason, I always thought Gene would lose the Outlaw Star at series end, but it turns out it is still up and running. This is good, because I was never quite sure about any sequel without the iconic ship. Add in a fakeout of Suzuka and Aisha leaving, but turns out they want to be in on the action (predictable but still amusing), and one last blast off into space and well… you got the end of an entertaining animu. What else is there one could want? 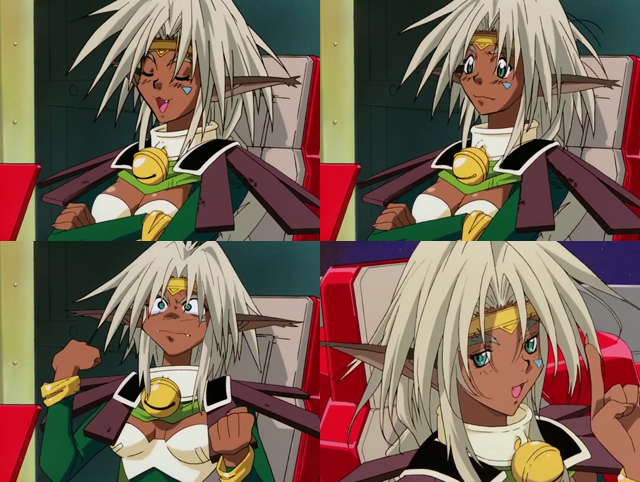 Overall: A few weeks ago I was struck with the thought of the efficacy of weekly coverage of a show, revered by everybody and their animu waifu since its inception. What good would it do for me to talk about something people have already watched, and even so, why would you talk about it if turns out you like it, like everybody else?

I’ve come up with a few answers. For one, writing about it weekly conditions me in not just writing but slowly but surely clawing my way through a backlog of animu I’ve been MEANING to watch but never get around to. Second, it’s nice to cover an arc of sorts to see if one is part of the many who adore this show?

Am I one of those people regarding Outlaw Star? …Enough of one.

Suffice to say, out of the three animu series dealing with guns and space in the far off year of 1998, Outlaw Star disappoints me the most. Is it because of its content? No. Its content is some of the best in all of animu. It is a vibrant, wild, universe filled with mystery, danger, intrigue, and Aisha Face. My disappointment is based on the fact we do not have ENOUGH of it. One could say, “Just be satisfied what you have,”, but what the fuck do you call this? 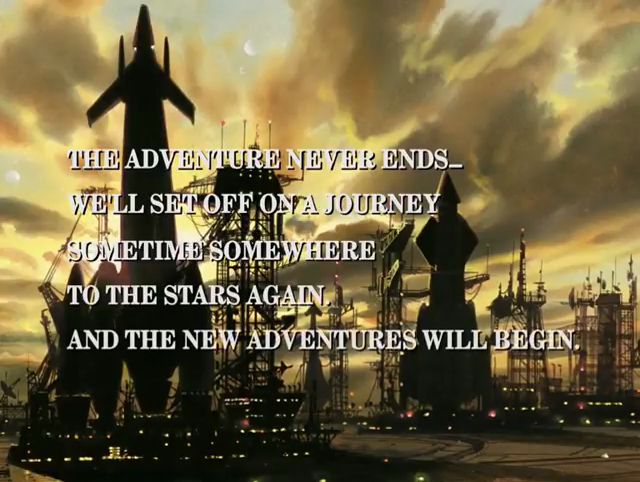 I swear I can hear an American Congressman far off in South Carolina yelling “You lie!” whenever this scene pops out.

With Cowboy Bebop, it’s restricted to the Sol system and its protagonist has an arc begging from the series’ first few seconds to be ended no matter what. Trigun? Restricted to the Planet Gunsmoke and also has a definitive end goal for its hero. Outlaw Star? MASSIVE universe, and then you realize the quest for the Galactic Leyline is not THE adventure, it is AN adventure. It is an adventure Gene takes up on Episode 4 and carries through to the very end for better or worse. This means there are MORE adventures to be had, which means more hijinks, gunplay, and Aisha Face as well! But guess what?

All you have are those 26 episodes, a 13 episode spin-off nobody remembers or has watched, and the promise of some one episode OVA named “Golden Wind” that… is STILL in the wind. So you’ve got a lot of great stuff, albeit rough around the edges and meanders from time to time, then it ends when you feel like you’ve just started. It is the most glowing recommendation I can muster for this show, because when it ends it kindof hurts. It’s a great end but you’re not in the slightest bit satiated from what you have watched (or at least I wasn’t). You want more, but you can’t get anymore. So consider this review a fair warning.

Even so? Hell yes, watch Outlaw Star. You won’t see anything like it elsewhere in animu, and the whole product (even the English dub) still holds up to this day. Will we ever see a TRUE sequel to Outlaw Star? Will its final shot be still full of shit?

As always, in the words of Gary Owens at the end of Space Quest VI: “Only time, and money, will tell.” 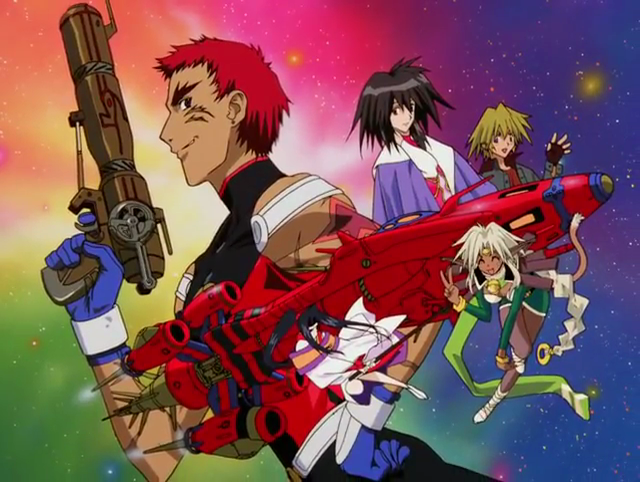 Eh. Just one more Aisha for the road. 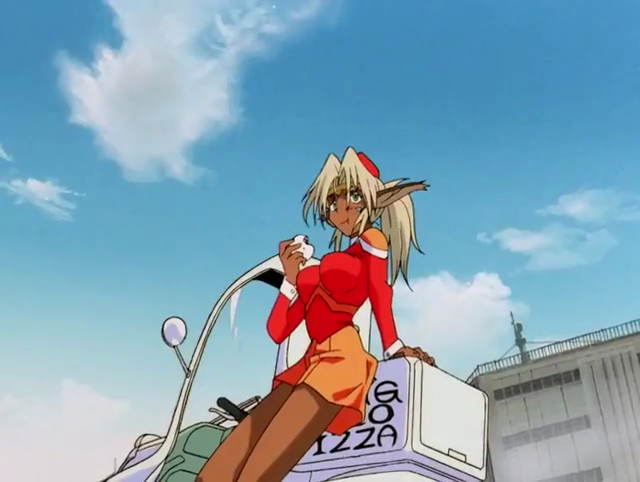