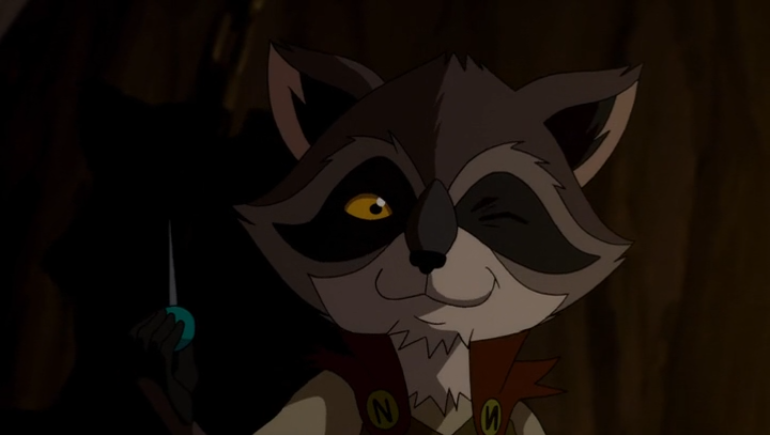 With Lion-O once again righting his course, it would appear this series is prepping for its finale with this small set of episodes. At my initial viewing, I thought it would be a 'one-and-done' at their latest locale: a desert dog town. Instead, it unfurls into a semi-lengthy mini-arc of lore and loss. The latter part is not just any loss, but multiple losses of life, plot devices, and even personal effects. Who knew?

The big draw of all this however is the introduction to a new ThunderCat to the mix: Pumyra. With the exception of Bengali (who probably would've been in the second season), all the primary ThunderCats from the original show are accounted for in the first season. Pumyra from the original show is kindof an inoffensive, and eventually nonexistent entity. Juxtaposed with the warrior Cheetara, she was more the nice nurturer. However in 2011, it appears the roles are reversed. Cheetara's role as a cleric, never mind her encouragement of Lion-O in the first half, makes her the nurturer in this iteration. Pumyra? All warrior, what with her introduction of her being badass in a gladiator's arena.

This is a fine role reversal once you see why Pumyra's all “GR! ANGRY!”. Unlike the other ThunderCats, who are sworn to their Lord, Pumyra has no affection for Lion-O due to his 'abandonment' of Thundera. This plays well into the eventual climax of the first episode (an arena battle) and moreso into the next one, which involves a rescue of other Thunderans from bondage. The episodes that follow (“Curse of Ratilla” and “The Birth of the Blades”) place our heroes with some quite epic odds. Pumyra is wary of Lion-O's penchant for mercy which he believes will be paid back to him; Tygra and Cheetara have to deal with a plan gone awry while being subject to a curse (or bad luck, according to Tygra); and Panthro's just happy to be there to kick ass.

We also get more lore with the also-canon-in-the-original-series Sword of Plundarr, complete with flashbacks to Lion-O's ancestor Leo. Whereas it was Lion-O feeling his way through acting as Leo did episodes ago, we now see Leo as Leo questioning Mumm-Ra's conquest, and how he came to create the Sword of Omens. The rest of the episode goes about as well as you'd expect, Lion-O, who could've had a game-changing item to beat Mumm-Ra, saves a life instead (Pumyra's), but gains her respect. It's expected, but not at all disappointing given what occurs throughout the episode. We now have an endgame for the season/series finale, so the hype is real on what to do next: get one of the other Stones.

...Meanwhile, sandwiched between that meaty story, is a smaller story which had its initial start as a subplot in the first episode in the batch (“The Pit”). Wileykit and Wileykat 'befriend' a pickpocket, a raccoon named Tookit, and throughout “The Pit” and the final episode of the batch, “The Forever Bag”, endure a gauntlet of crime, embarrassment, and frustration. If this seems to be filler, it pretty much is. However, this plot is saved by a number of factors. One is Tookit himself, who's very charming and bolstered by a great vocal performance by Fred Tatasciore. The second is his rather intriguing notion of “Kleptovoyance”, stealing things with seemingly no purpose but has a great use later in time (which makes for a lot of amusing situations). The third and final factor is it provides a good breather from the intensity of the two episodes preceding it. Lord knows from hereon, it's gonna be super serial feline fighting action, so it's best to have some whimsy before the storm.

...Then will come the storm after that storm, which is the rage people (including me) feel how this never got a second season. I know I'm belabouring a point, but Jesus must it be hammered.