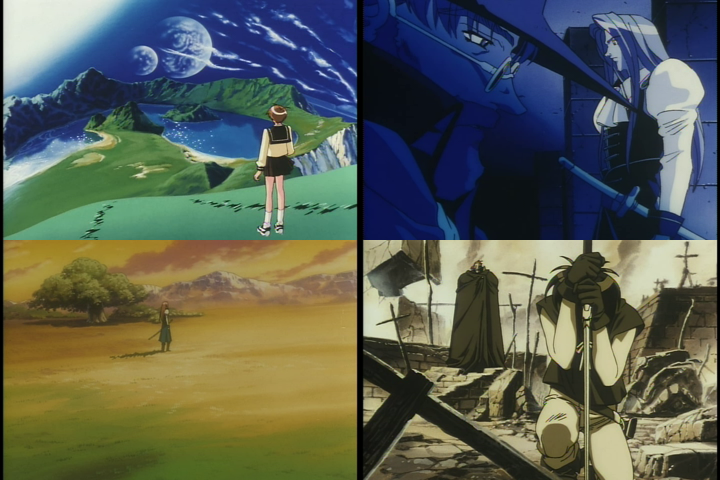 Anyway, this is the episode where Allen and Van come to terms with all the crap they endured the past few episodes. Allen confronts his father while Van confronts his own insecurities about fighting after his famous Dragonslayerslaying a few episodes back.  Unfortunately for our heroes, this involves teleporting some ethereal dimension where they deal with it by their lonesome. It’s a good thing for them though that Hitomi was not isolated like them, and is left to try her hardest to get them out.

While she does so, we get the most definitive flashback of Atlantis, outside of people lamenting about its hubris. As per usual, it doesn’t deviate much from the usual “High Civilization Succumbs To Pride”, however the unique thing that sets it apart from others is the source of their power: the ability to turn thoughts to reality. In a revelation I seem to have completely forgotten, in an attempt to not let such power return to destroy everything, the old Atlanteans used it to create Gaea, with inhabitants inured to the tale of Atlantis and how its tragedy should never occur again. I cannot really find much at fault with Escaflowne’s interpretation of this ancient tale.

…Strangely, there is something I find this show to be at fault over thanks to this episode.

This is the revelation given to Hitomi by Van’s mother not to try and summon back Allen and Van as they struggle with their issues. Apparently, this is because Hitomi’s anxiety somehow perverts fate and her inclination to imagine the worst possible result, leads to such. For flashback examples, the show uses when Allen takes a stray Crima Claw to save her, and Van’s injuries pertaining to Escaflowne. It is strange those are the events the show wanted to allude to in this regard, yet it doesn’t make much sense. If that is the case, shouldn’t Van have died even if Hitomi anxiously told him to watch out for the dragon’s tail in Episode 1? Shouldn’t Allen have died even when they had Millerna operate on his aforementioned injury? What does it mean for her visions of the Doppelganger or Duke Freid dying? What does it mean when she had those visions of Allen’s fort being burned to the ground?

There is no inclination on how such anxiety works, especially since one can have positive or negative anxiety. How much does agency matter in those regards? I know Hitomi is a lodestar of power given her attachment to Gaea and Atlantis by way of her pendant, yet I am perturbed at such a development. The vision of Hitomi’s grandmother at least makes sense, how she should instead of being anxious and assuming the worst, hope for the best and believe in her friends. The path to the revelation isn’t half bad, and results in some sound resolution on Allen and Van’s parts. Allen’s the better one of the two given how he comes to terms with his father, never mind how his father came to terms with is mortality and love of family. Van’s is the usual “TATAKAE!” battlecry, which isn’t bad I guess.

Either way, this is a nice episode with some great developments on the emotional core of our main heroes. I hope however they flesh out why Hitomi’s fate altering powers are like that, and address why I do not remember much of this part of the show compared to the first half.

Perfect World – I love the ethereal instrumental punctuating the early part of this song, especially when it played during Dryden’s first appearance. Don’t get put off by the Engrish though, because the beat it is sung to, when juxtaposed to the resolution of Allen’s arc regarding his father, gives it quite an emotional oomph. You do feel the sense of love and loss as it plays during the lament of Allen’s father in leaving.