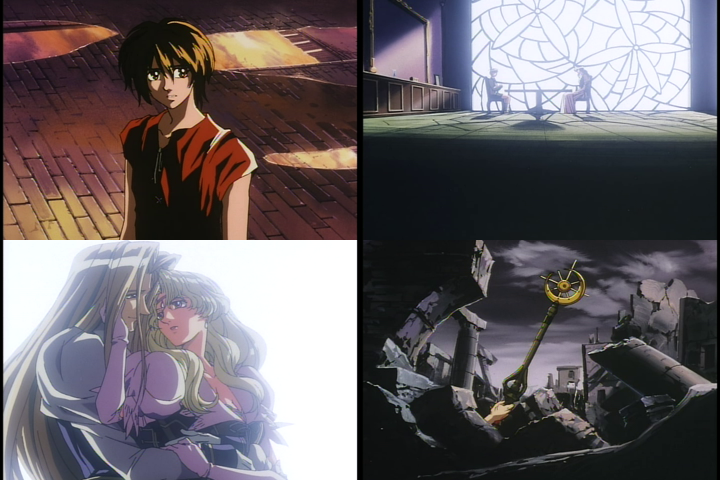 Ah the great Royal Weddings of our time…

...are couples that will never see “Dryden and Princess Millerna” near their names at any time in the future. Obviously, the wedding does not end up well for them (I mean c’mon, the episode is titled “False Vows”), but it is done in a way that only can happen in the world of Escaflowne. If you have only got here: No, this is not a bad thing.

I only remember this episode as the one where everything goes tits up in the worst possible way. Given my naïve youth I didn’t really think much of how the episode was handled and what made it good. Van’s unanticipated discovery of their kiss is handled in the most Van way possible, with him silently departing so he can brood in his new Windmill house while Merle consoles him. What could’ve been an awkward lull where the trio has to sit and ruminate about what happened, never mind have uncomfortable run ins with one another is instead replaced with getting ready for Millerna and Dryden’s wedding. Van and Allen do their own thing, so Hitomi has to shoulder the unenviable task of driving the episode.

It is unfortunate to Hitomi that it involves more interaction with Millerna. It seems all the fire in Hitomi’s belly regarding being honest with yourself is put out by the kiss she shared with Allen. Thus, she is more uncertain than ever when Millerna continues seeking advice from her on what to do next and if the marriage is a sham. The surprising thing from all this is that Hitomi is not so motivated out of malice not to tell Millerna her fortune speaks of ill omen, but more so to try and have her cake and eat it too. Using the knowledge from what she learned from his treks to the Mystic Valley and Zaibach, she tries to ‘will’ a different destiny where everybody is happy, Millerna sticks with Dryden, and she keeps Allen for herself. It’s a moment of questionable morals for the high school girl, yet the show always finds a way to not make us hate her for doing so. This is necessary, since at this juncture, they cannot afford to have Hitomi do something out of character.

This would turn out well, but of course since it is Escaflowne, Zaibach has something up its sleeve. After a fairly long period of being outsmarted, Zaibach is seizing the momentum from the divide set from that kiss, to capture Hitomi. She has become so integral to Dornkirk’s plans that when he says to eliminate The Dragon (Escaflowne) when Folken asks what to do of him, the latter is perturbed by that eagerness. Even so, he gives Naria and Eriya (who get a bit of backstory here, a sign maybe?) a blood transfusion, replacing their regular catgirl blood with something known as fortune blood. Apparently this means the two catgirls are so lucky they create some invisible sphere of influence that subjects everybody against them to full-on Murphy’s Law. Everything that can go wrong, DOES go wrong with them. It’s a perfect convergence between ideals and reality, as Hitomi’s desire to change destiny into one of good fortune for everybody clashes with the reality that it can also mean good fortune for the enemy.

Faced with these revelations, Hitomi finally succumbs to her usual decency, and brings a cliffhanger probably worse than the one in Episode 14. In that one, it’s mostly shrouded in mystery and is the result of an outrageous incident that comes out of left field. This one? It ends on a moral decision by Hitomi to face the music as she sacrifices herself to Zaibach and stop the bloodshed. We know what is happening, and how it is happening, and why Miss Kanzaki is doing what she’s doing, but we are unsure of what happens next from those decisions, and it is in a way terrifying. 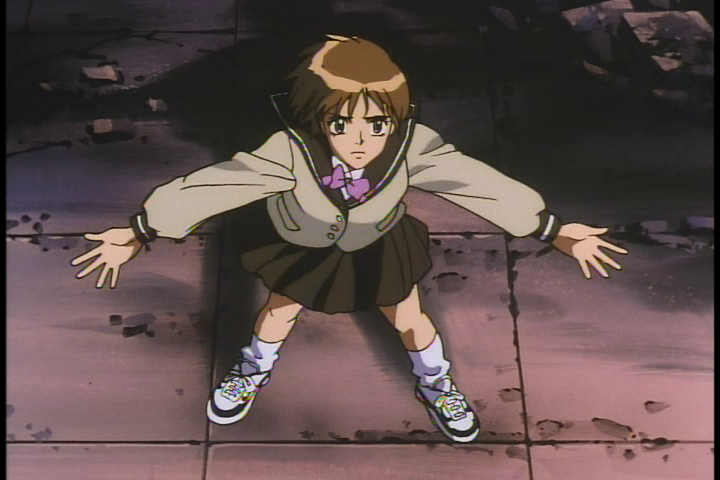 …But how that will turn out… we’ll see next week.

Charm – Seems only fitting I would finally put this track in with an episode that involves trying to evade the ominous foreboding it emanates. You already know enough of this song, and know how effective it is, from how starts with a ticking clock then escalates.