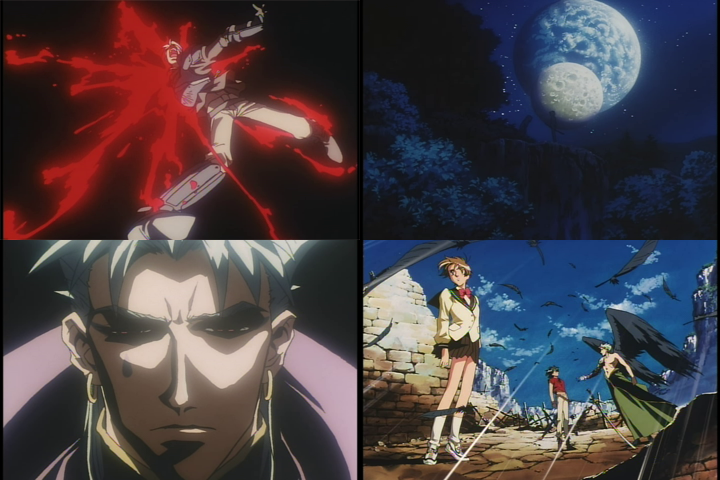 Things pick up for this marked improvement over last week’s. I have always remembered this is the episode where Folken officially defects to an actual side of the conflict. However, this is also an episode with a whole slew of other things I noticed I forgot since my last viewing of it. It is disappointing, since it is not just the plot of the episode that is great (never mind the music), but the world building and especially the animation.

For once we get our fair share of politicking on both sides of the conflict. Given the King’s illness, Asturia is left in the hands of his surrogate, Dryden, and a ruling council eager to give up Hitomi for peace. For now, Dryden staves off such intrigue by applying economic sanctions against Zaibach, but you see and feel the palpable uncertainty of everybody at the table. Only disappointing exception is Dryden’s father, who after being rather chatty in his earlier episodes is left to be a stand-in. Before I found out Kazuki Akane noted they had planned Escaflowne to be only 26 episodes, I’d have chimed in some “Had there been more episodes we would’ve seen their relationship develop a bit more.”  Now? Eh.

More interesting however is Zaibach. Since Folken left, the majority of the strategizing is now in the hands of various unnamed Sorcerors (leftovers from a few episodes ago, guess they survived), and the Four Generals of Zaibach. It seems Folken’s departure has not impacted Dornkirk much, since most of the work he did during his time is now fully operational. However, they are at a crossroad on how they should move in light of ever growing tensions on Gaea. This is a nice scene, with good use of one minor character: General Adelphos. He’s been around for most of the series in various scenes and mentioned in some capacity by Folken and Dilandau. Despite his rank he seems to be a consummate general, and loyal to his empire, yet always seems to be at odds with all this fate altering stuff. His observation of a girl about to eat a raw snail (and not for an appreciation for escargot), one which I thought was once a dream (or maybe a vision) but not anymore, is a pretty good moment to show the humanity still within Zaibach. After seeing one sole instance of seeing civilian life in Zaibach, a moment that will never be expanded upon, this is welcome.

Now that that’s settled, we can talk about the crux of the episode: Folken’s ‘reunion’ with Van. Using the wolfmen seen last in Episode 2, he relays a message to Van to meet him at the ruins of Fanelia. Obvs, he accepts the message, but only after he brings a curious Hitomi along. The entire meeting in Fanelia is less an attempt for Folken to beg forgiveness from Van, but to make one final push at his ideal. We see Folken’s past in lurid detail, after only being mentioned so many episodes ago (Episode 7). The scenes where he loses his arm against a dragon is expected in its grotesqueness, and serves to show how much has been lost by him since then and what he regained under the tutelage of Dornkirk. Van gets quite a bit of backstory as well, where we see how his entire life has maintained some form of hope his brother is still alive and will come back to Fanelia, a belief that still existed until Episode 5. It’s a good moment for them to come to terms with their past, amidst the ruins of their home where dragons now roam.

What does not come to terms however, is any alleviation of tension between the two of them. Van is still mired with rage against Folken, whereas Folken has not been deterred by Dornkirk’s ideas, only by the man’s application of it. Given we still have four episodes left, this is to be expected, but it does it so well. In a mirror of Hitomi’s feelings influencing others, Van’s own hostility is the the reason why the dragons are after them. It is only by letting go of it, that the physical conflict of the episode is concluded. Yet observe what happens when Van finally listens to Folken and lay down his sword. However, he does not sheath his blade, he drops it. It, alongside Van’s not taking Folken’s hand by episode’s end, shows there is still a long way to go in this regard, and we don’t even know yet why Folken now has black wings instead of the white seen in Episode 5….

Fanelia, a land they say is protected by dragons, yet in order to become king they must slay one of them. What a paradox. What an episode.

Fatal – First heard in Episode 5, it brings itself back into the series again. Folken’s lone whistling has a nice ethereal tone to it, evoking nostalgic memories of long past. It is not just his past, but the past of Fanelia before him and Van. Back to the beginning, as if it had been whistled to them in a cradle… A cradle song.