In researching for my guide to the Gundam timelines and canon I took a look into the deep hole that is Dark History (or Black History, being the direct translation) from Turn A Gundam. Here reflects my findings, as limited as they are, as of April 2nd, 2020.

Huge, massive, thanks to Mecorx for translating this and dealing with my obscene obsession driven trying to map out the entire franchise.

The Master Grade Turn X, released in June 2014, has a small blurb on Dark History... 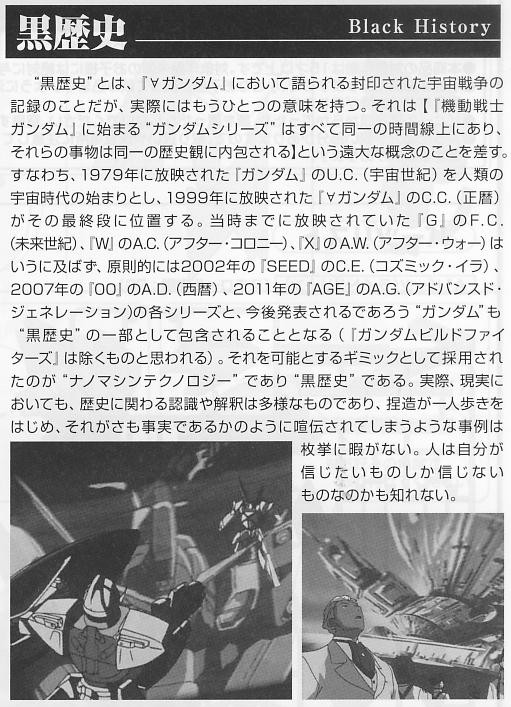 The translation is a follows,

Gundam: What Sunrise thinks is Official

While researching for Falldog's Guide to Gundam Canon and Timelines I was directed to this post by the great Mark Simmons on Mecha Talk back in 2007. In it he references a round table discussion from 2001 in Dengeki Hobby where folks from Sunrise discuss what's canon within the Gundam franchise. The website Mark linked to, at the time containing a transcript of the discussion, no longer exists. However, thanks to the Internet Archive Wayback Machine the content can still be accessed. In additional sections (which I didn't have translated) go on to reference other works and how they view them from a canon prospective. Mark's post on Mecha Talk does a good job summarizing the related content.

For my article on Gundam canon and timelines I went and got the primary section translated by Frog-kun. That translation is provided below for reference.

I asked Frog-kun for details regarding his translation of オフィシャル into canon and this is what he elaborated with,

"I translated the word オフィシャル (which is a Japanese transliteration of the English word "official") as "canon" a few times mainly to avoid repeating the same word over and over. If you don't think it fits, you can replace it with "official". From what I understood of the conversation, though, it did feel as if they were discussing official versus non-official continuity in a way that was very reminiscent of discussions about "canon" in the English fandom sense. I used the word because it would help put the discussion into perspective for an English reader.

"Also, you're right that Japanese fan lingo doesn't have a word like "canon", but there are words in everyday use like 本編 and 原作, which mean "original work". Discussions about what constitutes "official" work are still matters of contentious debate, and many Japanese fans hold the original work at a higher level of esteem than any subsequent adaptations.

"So yes, there was a bit of interpretation going on when I translated オフィシャル as "canon", but at the same time, I don't think the concept is absent in Japanese fandoms. "

Slowly, as Mobile Suit Gundam: Iron Blooded Orphans progresses, so does the Gundam Barbatos as it slowly equips more weapons and armor. That change is reflected in one of the opening segment's early scenes. I'll update this page with images of the opening as the series begins.

Note - You can click to expand and use the left/right arrows to navigate.

Where to Start - Getting into Gundam (2022 Edition)

As a moderator over at /r/Gundam I often see folks asking how to get into the franchise and what shows to watch. Hopefully this guide will help you along that path.

If you don't have time to go through and read, it's best to pick with one of the below series:

Note that the above are in no order of preference or recommendation. Why I think they're four good starting points is detailed below.

If you can't be bothered as to finding out why the above are recommended, or just want me to make the decision for you, then watch the original Mobile Suit Gundam. The full series, all 43 episodes, is the best way to go. Though many will argue that the movies are a valid alternative.

Just a few episodes of Otaku Evolution I feel you should watch or revisit:

Aquaman he ain't. (Because people care about this character.)

Last week, writer Scott Snyder and artist Greg Capullo's Batman (vol 2) #38 came out, and much controversy is being made of a revelation made in the final pages concerning everybody's favorite killer clown, Joker. Apparently, the Joker is, it seems, immortal! Jim Gordon shot him several times in the previous issue, killing shots that he nevertheless shook off. But what really freaked Batman out was when he confronted D-list villain Crazy Quilt, who revealed that the Harlequinn of Hate had a special chemical in his spine similar to a substance in certain jellyfish that induces cell regeneration.

Reconguista in G: What's going on? A general summary of the universe

Been watching Reconguistia in G lately? Well, you should, if only for the great animation and fights. If you are, do you know what's going on? Let's just say "easy to follow" isn't exactly a common descriptor. Tomino's break-neck pacing and sporadic exposition haven't made the picture clear for a lot of folks. If you've seen Turn A, it's a lot like that, just turned up to 11.

Hell, I barely have a grasp of what's going on and that seems to fly out the window with the start of each episode. Hopefully this will help clear things up a bit...