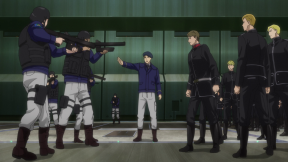 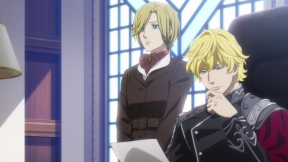 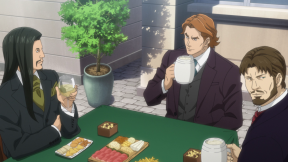 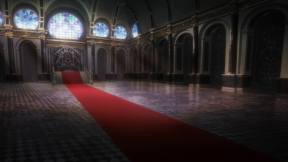 This episode helps to flesh out the world of Legend of the Galactic Heroes by showing the effect Reinhard has on the Empire, but on its own, its not a particularly compelling or important-seeming entry in the series. After waiting a week for a new episode, it's even somewhat disappointing. But when seen in the whole of the series, it does seem to add to the overall substance, in terms of world-building.

The episode largely follows the beginning of Chapter 2 of the second LoGH book, discussing the reforms Reinhard has put in place. There was a bit about domestic matters, covering Reinhard's humble housing, his change in welfare policies, tax reforms, and institution of farming loans, and the like. It's not a large part of the chapter. This episode expands upon it by showing the actual citizenry react to the reforms in person, making it less of an abstract. An interesting omission, though, is the mention of the former "Department of Social Dicipline" and its chief, Heydrich Lange, which was placed under scrutiny by Oberstein. I suppose if we ever reach the later books in this adaptation, we'll get to see enough of Lange.

An interesting argument put forth in this episode is that of the origin of internal reforms in a country and where they ought to spring from. Karl Braque believes that reform brought about by a single person, that doesn't lead to a form of self-governance by the people, may not really be considered true reform. What you have is a government for the people, but not by the people. In other words, reform that relies solely on the character of one person, rather than the collective political will of democratic rule. Eugen Richter, Braque's colleague, tells the latter that the people will support Reinhard regardless, both because it's a huge improvement from the Goldenbaum Dynasty of the past and that Reinhard lives his truth, eschewing extravagance and giving away wealth to the people. It will be difficult to get anyone to side against that, even for the sake of republican democracy.

It's interesting to see some of the admirals relaxing casually, enjoying a meal, or just shooting the shit, gossiping (looking at you, Mueller). The highlights were Bittenfield and Oberstein's reactions to the dog. Bittenfield is incensed that the dog won't eat the food he offers, while Oberstein quietly and matter-of-factly just accepts the dog as his when it approaches his car. Some very humanizing moments for Reinhard's group in this episode.

Next time, I suppose, we'll finally get to Schaft's plan to neutralize Iserlohn. Maybe we'll even get to see Phezzan again and meet Rupert Kesserling. 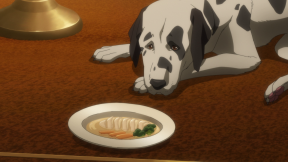 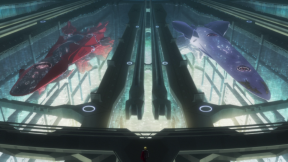