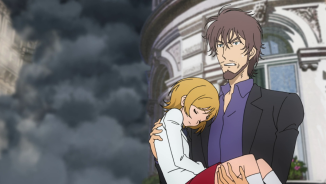 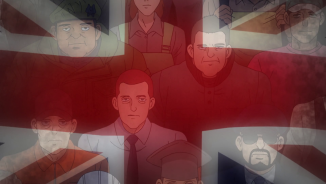 Synopsis:  Sherlock Holmes is not amused by the antics of Lupin III in London! While Lupin looks to uncover the mystery of the movie poster and its connection to the Raven organization, law enforcement investigates him. But Holmes takes it upon himself to narrow down where the Lupin gang's hideout is and confronts every member of them as they scramble to stop him. It's a confrontation between the greatest thief and the legendary detective! 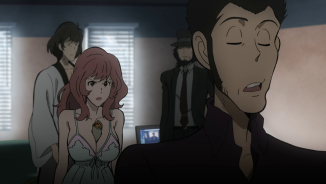 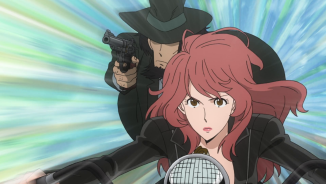 Now that Sherlock Holmes is fully aware of Lupin's presence in the Big Smoke, he wastes no time in getting our hero/villain's way. He's especially angry because, for one, Lupin made some kind of vow not to return some years ago. And second, and probably more importantly, our smirking stealer had something to do with the death of John Watson, Holmes' partner and Lily's father. We don't know the circumstances behind the death, which I'm sure we'll not know about for quite some time, but whatever the case, the young Lily is tramautized by what she witnessed and Holmes is determined not to expose her to Lupin.

Apparently the treasure of The Raven is a bunch of swiped German booty from the second World War that they used to the fund the organization that has penetrated the UK's power structures at every level. What the movie poster has to do with it, or how Albert came to know about it, is yet to be determined, but Inspectors Zenigata and Lestrade interested in the room in Faulkner's house that it was stolen from.  They agree to share information, which certainly seems like a reasonable solution, but we'll see how that goes. For Lupin's sake, it may be dangerous to have both Holmes and the Zenigata-Lestrade team on his tail, but the man does like a challenge.

Speaking of a challenge, Holmes is every bit a match, and more, to the Lupin gang. He tracks them down to their hideout based on just some basic information, and proceeds to dismantle them in short order. Goemon can't draw his blade, Jigen is missing with his shots, and Fujiko seems a little flustered (and maybe even charmed). The only person Holmes' couldn't undo was Lupin himself, who is actually not very impressed, despite the detective's actions. He shit talks Holmes, manages to pull a gun on him with a distraction, and cleanly gets away from the authorities. But Lupin does retreat from London, at least for now, so maybe Round 1 did go to Sherlock Holmes after all.

While it was a little frustrating to see the gang so easily dispatched by a newcomer, he is the legendary Sherlock Holmes after all, and I'd be frustrated if he didn't show that he was remarkably skilled at whatever he sets his mind on. I want there to be a worthy opponent to Lupin, and Holmes is certainly that.

It looks as though, however, the next episode is not main plot-related, so it's just a one-off caper, and those can be just as good (if not better ocassionally). But I am craving more of this story, so I hope they don't stay away from it too long. 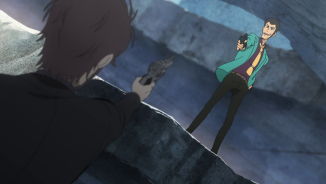 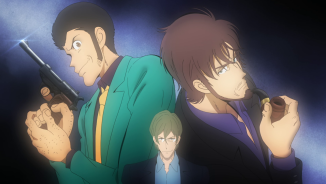