Episode 04, "The Killers in the Diner" 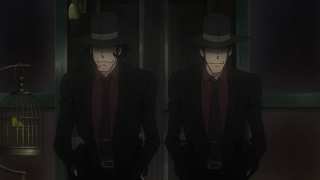 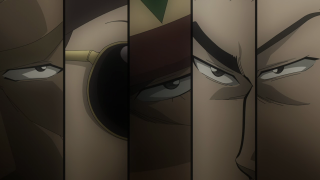 Synopsis:  Two mysterious strangers walk into the White Elephant diner, a place that has become occupied by waiting hired guns. They come there as the others, looking for a man that everyone intends to kill. Which one of these scheming assassins will go home with the prize? It's anything but a movable feast when these killers let loose! 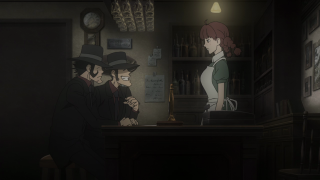 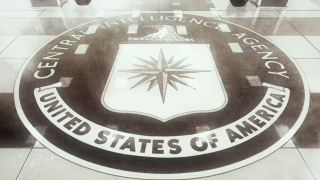 In 1927, Men Without Women, a book of short stories by the writer Ernest Hemingway, was published. It included stories like "Hills Like White Elephants", "Ten Indians", "An Alpine Idyll", "Che Ti Dice La Patria?" and "Fifty Grand". The subject matter of these stories varied.

Here, in Lupin III Part VI, famous anime director Mamoru Oshii, who has written this episode, references all of these stories, and the name of the anthology itself. But most of all, a good portion of the episode is an adaptation of one of the stories in the collection, "The Killers", which featured Hemingway's reoccurring character, Nick Adams. He doesn't show up here, mind you, but plenty of other people do show up who weren't in the adaptation: the diner full of killers. For, you see, the story only featured two.

Having Lupin and Jigen as the two killers featured in the story made a lot of sense, as they are constantly working together as a team, even without Goemon or Fujiko. I'm happy that the voice actors for these two characters were able to somewhat change up their voices, even though it was pretty clear who they were from the beginning. But instead of being hired mob hitmen, it's just them as usual, trying to claim a treasure, which in this case has been passed around and now lies with the man Andre Anderson (a reference to Ale Anderson from Hemingway's story).

The fidelity to "The Killers" is pretty spot-on, minus a few tweaks here and there. Fortunately, one of those tweaks is not using a certain racial slur a few times. But everything from the description of the two killers Lupin and Jigen "play" as, to some of the specific dialogue used in their interaction with the waitress (who turns out to be Fujiko) is lifted from the story. The first half of the episode, and even part of the second half, is almost a direct adaptation of it. Though it has a Lupin III twist that, honestly, is kind of convoluted.

Apparently Allen Dulles, the first civilian director of the CIA, and Hemingway fan, used an early copy of "The Killers" as a kind of code book called an Ottendorf cipher, and it ultimately found its  way into the hands of Andre Anderson who was just looking to make a quick buck from it without knowing its true worth. Lupin, Jigen, and Fujiko got wind of this and plotted to beat the killers the CIA hired to take Anderson out with to the punch. Not for the kill, but for the book.

Though... why did that mean they had to act out "The Killers" in real life? Just as a lark? It doesn't make a whole lot of sense. And were Lupin and Jigen working with Fujiko the entire time or did they just guess about her involvement at the last second when they encountered her as the waitress? And what's the deal with the CIA sending a bunch of killers to a single location when one or two would have sufficed? And if Lupin and Jigen are just playing out the short story for fun, why is it that there's a guy named Andre Anderson who also acts like Ale Anderson from the story? Is he in on it, too? Am I overthinking this?

Anyway, it's a bit muddled, which is why this episode has disappointed some. But I personally like it a lot better than the previous one, and it's probably Oshii's best work in decades. Then again, when you've seen Oshii's work in the past decade or so, it's not a high bar to clear.

This isn't the first time Lupin has gone after a treasure involving Hemingway. Just look at 1990's Lupin TV special, The Hemingway Papers, where Lupin is after a treasure Hemingway spoke of in a lost draft. That's actually a very good TV special. Why I don't own a copy yet is beyond me. Maybe I'm waiting for them to dub it into English and release it on Blu-Ray.

It looks like the next episode is part one of at least a two-parter, if not more. And it references Edogawa Ranpo works, like The Golden Mask. I'm not as familiar with Ranpo as I am Hemingway, though, so I guess I'll just have to judge it completely on the episode itself. 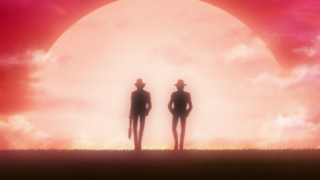 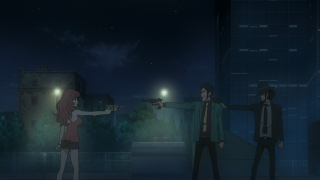