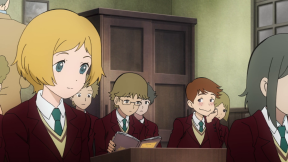 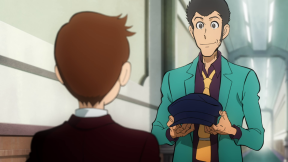 Synopsis: Three years ago, Lupin and Jigen got mixed up in a mess involving Lily Watson and an assassin. With Sherlock Holmes temporarily infirm, Jigen is tasked to escort Lily Watson safely from her school to London. But a former rival, Brad Roark, interrupts, planning on taking Lily out for witnessing something she shouldn't have. It's a ride to remember as Jigen has to outrace and outgun his pursuers with a gun that's about to give out. 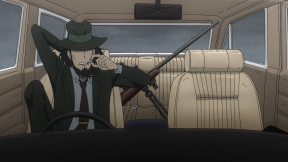 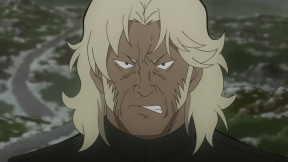 We get an interesting episode that mostly just features Lupin and Jigen (I suppose last episode was the same, but at least Zenigata was in it), with Jigen doing most of the action, which gives us some insight into his character. It honors the tried-and-true tradition of "guy Jigen pissed off in the past trying to kill him". Ex-boyfriend, maybe?

Jigen is really attached to his .357 Magnum revolver, but here we see that it's broken down over time, to where the frame needs to be swapped out, but the gunsmith isn't sure he can even get parts anymore for it. Our favorite hatted marksman refuses to adopt a different signature gun, because his gun is his "partner". Just as he refuses to change his gun, he refuses to change his lifestyle, telling "Lily" that while even his nerves get frayed doing what he does, being a gunman is "a way of life" - it's the only thing he really knows how to do, the only way he knows how to be. So he's a stubborn guy, a little behind the times and set in his ways. .

Lupin continues to support Lily Watson from behind the scenes in this episode, ensuring her safety while remaining unseen by either her or Holmes. The name he calls himself at the museum when he helps Kenny is "Daddy-Long-Legs", like the character in the likewise titled book by Jean Webster. In the book, a mysterious figure pays for a girl's education. Here, Lily herself has a mysterious benefactor in Lupin, who charges Lupin with the decoy operation.

Brad Roark is some kind of mercenary or hitman and has a past with Jigen, and apparently is taking a job from the Raven organization to get rid of Lily before she remembers the night of her father's death. Why is it that no assassins were sent between Roark and the guy from the previous episode? They had three years and two guys is all they could muster? Or are their further tales of Lupin and Jigen stopping Lily from being killed? Maybe they didn't want to risk killing her after she was back living with Holmes, but that didn't stop them last episode. I guess they had to act last episode because Lupin and the gang were getting involved again. At least, that's what I'm choosing to believe.

The Kenny/Lily fakeout was interesting. I'm surprised that, given the fakeouts in the past two episodes, I didn't see this one coming. Kenny must really like Lily, because he took a big chance being the decoy for her and being in the crosshairs of Roark.

I liked this episode a lot. We got some decent road action, some character moments for Jigen, and even a bit of super self-confident Lupin. There wasn't a heist, or anything (next episode looks to be one), but it felt like a classic Lupin episode. 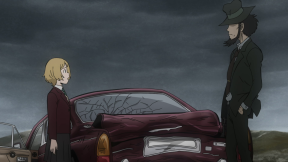 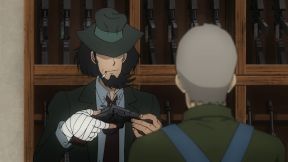