Episode 12, "The Ghosts of Britain" 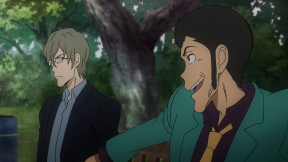 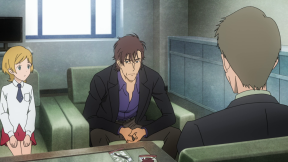 Synopsis: The mystery of the Raven is about to be revealed as Holmes looks to root out the killer of Watson while Lupin and other parties converge on the hidden treasure. It all comes to a head when deductions are made, secrets are unmasked, and there are tense confrontations! Who will come out on top, the world's most famous detective or the world's greatest thief? Or will it be somebody else? The game's afoot! 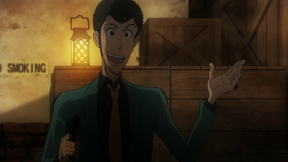 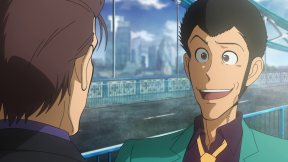 Now this is what I'm talking about! Finally an episode of Lupin III Part VI that blew me away. It's just too bad this story arc wrapped up after just a few episodes of it, leaving the rest of the series to tool around elsewhere. But what a conclusion! I loved it.

I enjoyed the scene with Lupin speaking to Albert at the park, each of them trying to out-smug the other. Ultimately, Lupin gets the better of Albert by having Fujiko pop up behind him with a gun. It looks like that's the last we'll be seeing Albert for a while, but hopefully not too long because the character is interesting.

Speaking of Albert, he played right into the plans of the culprit behind all this death and secrecy. After being tipped off, he came into England to impersonate Lord Faulkner, which necessitated an investigation that put Faulkner's belongings aside, including the key to the treasure. The poster was a red herring the entire time. After Faulkner's death, the drawing room remained unguarded, but that, too, was just a diversion, as it was Faulkner's ring that was the real key to the treasure, probably without him even realizing it.

And without the culprit, who turns out to be Inspector Lestrade, from realizing it, either. It was only after Holmes pointed out the ring that Lestrade and Eliot were tipped off, the latter stealing it to get to the treasure, and the former coming along with Holmes hoping he could collect the treasure as evidence and then, presumably, make off with it. And Lestrade killed Horatio, Watson, Faulkner, and Jenkinson all for this. And the reason why the Raven only had one killer was because the Raven was already basically defunct, and only fringe members like Lestrade and Eliot were carrying out their duties without knowing the main body of the organization crumbled decades ago.

That was a pretty clever bit of writing. As was the revelation that the treasure Lestrade and Eliot had been looking for had lost its potency as a threat years ago. Too bad for Lupin that he won't be able to collect this particular score, but at least Fujiko didn't get much (just the map for the underground passages).

A particularly good part was Watson making his final request to Lupin, not seeing that it wasn't Holmes that was with him, and Lupin feeling obligated to ensure Lily was taken care of. It shows that while Lupin is a dangerous criminal, he's not without his soft spots, as shown some episodes ago when he saved Kenny in the museum and had Jigen escort the disguised Kenny as a diversion to ensure Lily's safety. Lupin also didn't really have any hard feelings towards Holmes, seeing him as kind of a friendly rival.

An interesting final revelation was that "the Professor" that that assassin from some episodes back was talking about was indeed James Moriarty, a young man who apparently knows Lupin and has been working with the Baker Street Irregulars to assist Holmes this whole time. But obviously Moriarty has his own plans, too. What they are we can only guess at, because this is the end of the storyline.

The episode only loses a bit in the sense that we didn't get to see how Lupin, Holmes, and Lily made it out of the death trap at the beginning (the one from the end of the previous episode) and Jigen and Goemon don't get much to do. Otherwise, it was an excellent episode, clearly the best in this quality-fluctuating series.

So where does Part VI go from here? Apparently to Lupin's mother?! We'll see what's up with that soon. 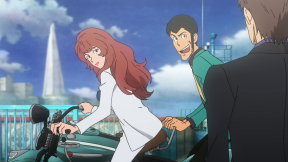 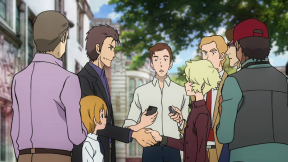