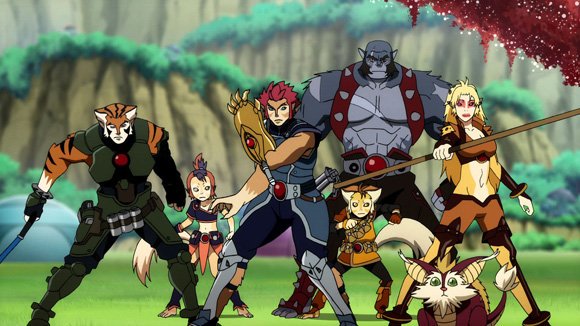 Man alive, I thought it would be a few episodes after what I had watched before I would be won over by the show. Yet about halfway through this one, I was already won over not just by the episode proper, but the whole show in general. Had I ONLY watched this after the previous episode, I would've probably finished this show earlier. Alas, that was not to be the case, but better late than never.

This week, we're introduced to the Berbils, which are pretty much robot bears with a natural penchant for technological building. They are unaltered from the original series counterparts in both design and concept (although these ones have a more appealing face design), but the way they are handled makes for the most charming the series has ever been. Lion-O, Tygra, and Cheetara take these new creatures in stride and with much amusement; Wileykit and Wileykat are so hopped up on Candy Fruit they spend most of the episode in a trancelike state of hyperactivity as if they were Bart and Milhouse on a Full Syrup Squishie; and Panthro?

“I don't trust anything that adorable.”

With those very words it pretty much lifts the miasma of “Hurdurr super serial whiskers questy quest” that was most of the previous few episodes. Those last two before this one are good points of improvement, but those only involved Lion-O. Now we know the feeling of wonder and whimsy can be extended to a cynical old fart like Panthro. It is pretty obvious the Berbils win him over, but the reactions he gets from them, never mind his own reactions (like when they repair the Thundertank), make for great character moments. Panthro was in need of such, and this episode delivers.

This episode is also bereft of the existential “Who am I? Who are the ThunderCats?” falderal plaguing some of the earlier episodes. Lion-O and Tygra are not bickering, and they are eager to aid the Berbils in their time of need. There's no overwrought pretext of “WE GOTTA FIND THE STONES!” or “WE MUST SEEK OUR NEXT DESTINATION!” or “WE GOTTA MAKE THE BERBILS OUR ALLIES!”, just... ThunderCats being ThunderCats like the 80s show was without much of the cheese and overacting. Then you add a pretty amusing endgame fight which involves hyperactive hijinks, Snarf actually getting a bite into the fight, and some badass Thundertank shenanigans and you've got a pretty a great episode that's only made even more great when you cap it off with Panthro doing something I never thought I'd see him do in this series.

God, I'm sorry ThunderCats 2011, I REALLY would've stayed had I watched this episode back then. This said, I'm definitely sure I'll be fixing that this time. You now have my full, undivided, attention.