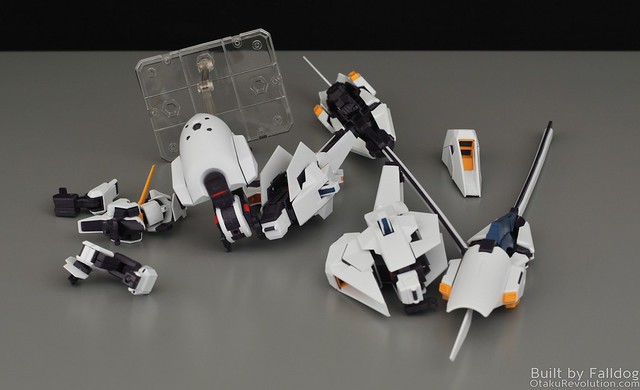 If you can't tell by the opening photo, fuck this kit.

I was fairly excited to hear that CuteCube, yet another Chinese third-party/illegal Gunpla manufacturer, was going to release a 1/100 Wondwart, one of the magnificent Advance of Zeta designs that have thus far recieved very little love from Bandai. I knew when it was announced that it was going to have issues. Some pieces that don't fit here and there, some flashing over there, etc. Given its provenance these sort of things are to be expected. And CubeCute's kit doesn't disapoint. There are some pieces that just don't fit right, either too tight or too lose. There's flashing issues... everywhere. Okay, no big deal. Like I said, it's to be expected, right? So why the big stink?

Because 90% of the fucking polycaps aren't sized correctly. That's right - the core of this kit, all the joints where there's a polycap, is fundamentally fucked. In some instances the polycaps are too big to fit into the slots they're supposed to go. In others the hole in the piece is too small for the parts that are supposed to connect to it.

I know what you're thinking, "Still, Falldog, you can fix that. Any builder with a hobby knife can. I still don't see why you're pissed off." Well what's really gotten under my skin the whole build is that not a single mother fucker at CubeCute exercised any level of quality control. Did anyone built this kit off the production line? It's so fundamentally flawed that the only way these runners made it into our hands is either ignorance or callousness. Think about it. A rational company would design the kit, CC the molds, press a few runners, and build the kit. In doing so they would realize that out of the box this thing is impossible to build. If it wasn't from ignorance then they did a test build, realized it was fucked, and shipped it out anyway.

Need more proof? The vast majority of these (well, as far as I'm aware, all of them) shipped with a runner where a key joint was misformed (one of the shoulder joints, instead of molding the plastic round plastic bit, molded the empty space inside) making it absolutely useless. It's only because someone cried foul and got them to send out whole replacement runners. How does this make it past even the most basic of quality control checks?

Fuck, even the screws that came with the stand weren't adequate. They were too short as the pieces are molded so I had to go in carve out the joints until the screw was able to make purchase with the nut. Fucking sloppy.

Even beyond the basic manufacturing issues, for every good design choice there's a bad one. The worst is the decision to make a key pegged piece two separate pieces. Allow me to illustrate with my terrible drawing abilities... 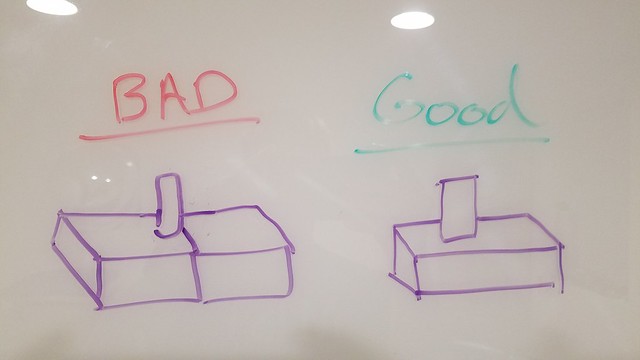 On the left is your two pieces with a peg mounted on one side. On the right a single piece with a centered peg. 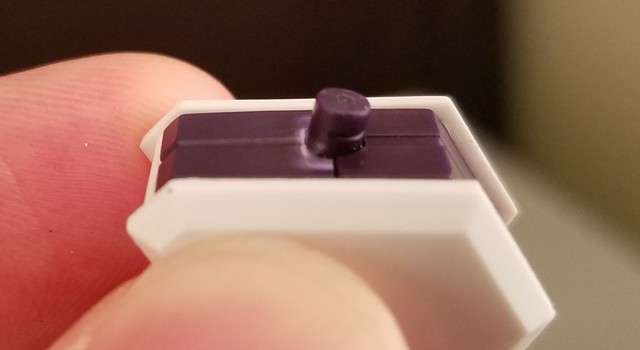 Here's what happens to the bad example when you try and insert the piece.

What this means is that the peg, a key piece in a joint, is now hanging at the end with no support at one side. Any sort of issue getting the piece into its corresponding joint (especially on a kit where the polycaps are fucked up) means there's a much greater chance the piece will bend at the base. Combine that with the terribly designed upper arms (a weird extra hinge for posability means a drastically shorter peg length) and you've got Bad Engineering 101.

So, as I write this review, my Wondwart is laying in a heap on my photo stage, attempts to attach the arms and weapons for a few glamor shots up in smoke. I've already given up on this kit and glued a bunch, resigned to the fact that I'm never going return and paint this, and I still need to go back and glue a ton more pieces just so I can get it assembled on a shelf. As a comparison point, I still have aspirations to paint Mechanicore's massive Tief Stürmer. This is probably the first time I've really given up on a kit. Not due the lack of issues, but the obvious lack of care and commitment that went into it. It's sort of sad, actually.