Welcome to my multi-part review of Mechanicore’s latest release, the 1/100 scale Tief Stürmer. 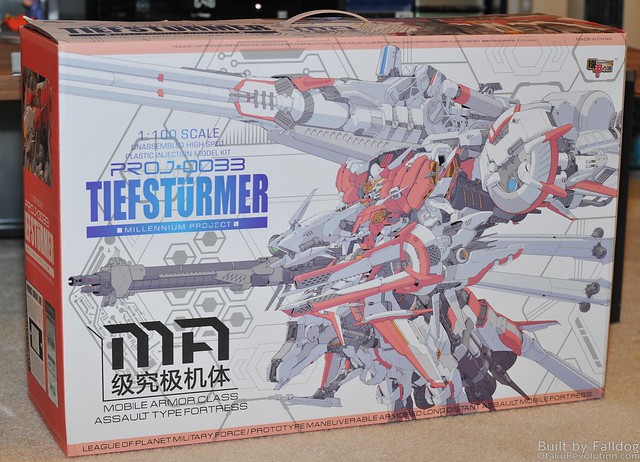 Late last year I finished the Elyn Hobby 1/100 scale Kshatriya. It was a mighty big challenge in part because there were only a few English reviews of the kit out there and just a handful of galleries with photos suitable as a build reference. None of them really went into detail about trouble areas so I knew something was headed my way, just not sure what. My hope for this mega review is to provide that aspect for folks looking to pick up and build the Tief Stürmer. In photos of the built, from the first folks to build the Stürmer, I noticed fitment issues and resulting cracks. With any luck I'll run into issues like that so folks building their own will be better prepared.

I'm heading into the kit with the assumption that it's effectively a 1/100 scale Perfect Grade kit. Super large, super expensive, and not something that folks new to the hobby should get into. Per Samuel Decal the overall height, not including the stand, will be just over 22 inches. The over all lenght of the kit will be 34 inches. This this is going to be larger than the HG Dendrobium! It's actually more expensive than the Dendrobium as well. Retail is $350, not including shipping from China.

Here in Part 1 of this review I’m going to discuss who Mechanicore is, details regarding the Tief Stürmer kit, and a look at the box and what’s inside. In upcoming parts I’ll review different aspects of the kit with a final review once assembly is complete.

Mechanicore is a third party Gunpla design and manufacturer out of China. Unlike most other Chinese Gunpla manufacturers they have avoided doing bootleg kits and instead have taken the time to develop and release their own kits, though their kits are based on pre-existing Bandai designs.

The Tief Stürmer is Mechanicore’s third release. Prior releases include 1/100 scale Ω Zerstörein, and the 1/100 Σ-Zerstöre, based on the Penelope and Xi Gundam designs respectfully. I don’t know too much about these kits as their design isn’t a particularly favorite of mine and I haven't picked them up. While I have heard that the molds were a bit rough in areas and the fitment not being up to industry par, I otherwise haven’t heard anything too damning.

Mechanicore’s Tief Stürmer is a new kit based off the Deep Striker design form Gundam Sentinel, “tief stürmer” being German for “deep striker.”

The box is huge, really huge. Weighing in at over 10 pounds it dwarfs other 1/100 scale kit boxes, let along perfect grades. 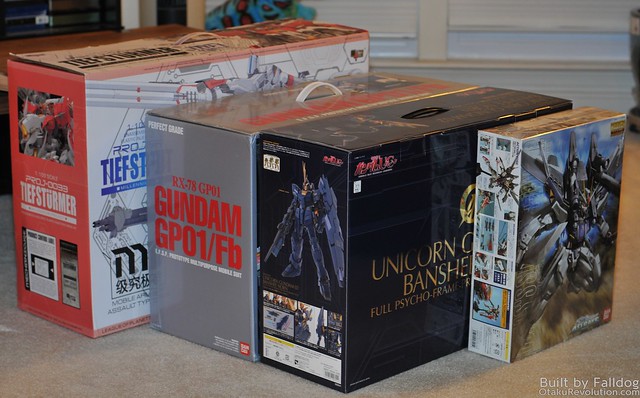 The box itself isnt anything special. It simply a flat (non-glossy), well printed and detailed box with a handle. The artwork on the front and rear is very impressive and detailed drawing of the Tief Stürmer. Unfortunately they blew up the image so much that all the lines are stretches of jagged pixels. On the outside of the box there's also some interesting fine print about the conditions of use. I'm somewhat perplexed by their suggestion that the aluminim pieces shouldn't be touched with bare hands as the metal might rust, and that we should use WD-40 to clean the same metal pieces. 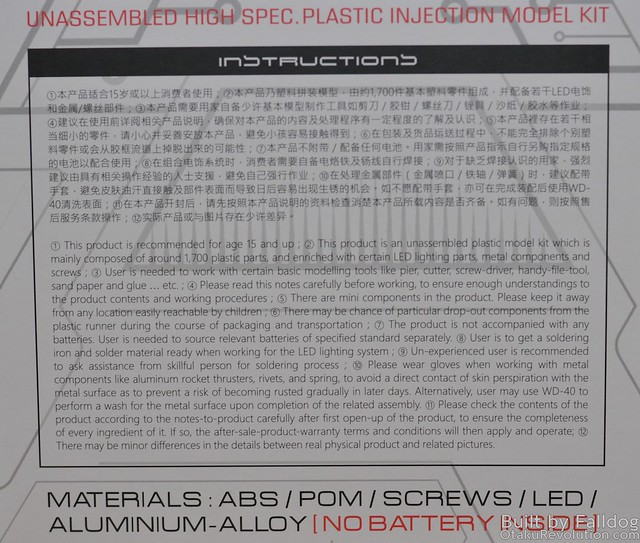 Each box appears to be individually numbered as well... 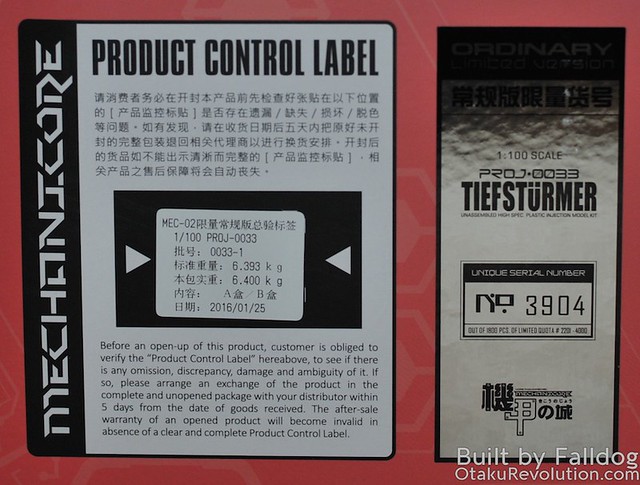 I have number 3904, "out of 1800 pcs. of limited quota #2201-4000." I'm not really sure what they mean there. There were some early limited editions with metal v-fins, light up beam sabers, and limited edition decal sheets, but I'm fairly certain there weren't 1800 of them. Got this one wrong, per TheAutobot75 in the comments, they made 2200 limited edition kits and 1800 regular edition kits thus far. One way to tell the limited edition from the regular edition is that the limited box shows the Tief Stürmer with all of the special edition camo markings on it. As for the apparent limit of only 4000 release, I haven't seen any hint that is a hard number.

To the left of the product number is the "Product Control Label," something which I've never seen before. It seemed that they weighed the box, and checked off on it's content, before sending it of to the retailer. The intent is that you can get the box, weigh it, and see if something is amiss. I'm not really confident that a lone runner or two, let alone one runner getting swaped out for another accidentally, is mitigated by this quality control process.

What's in the Box?

Inside the box there the runners are split into two smaller boxes, Box A and Box B. As best I can tell, there's no reason for the separation from the end user side (Mechanicore probably did that to make packaging easier, there's nothing in the guide indicating whether a runner is from one box or the other). It's interesting to note that each box is sealed with two separate labeled stickers, so if you buy the kit second hand you can easily tell whether someone has opened them up or not. 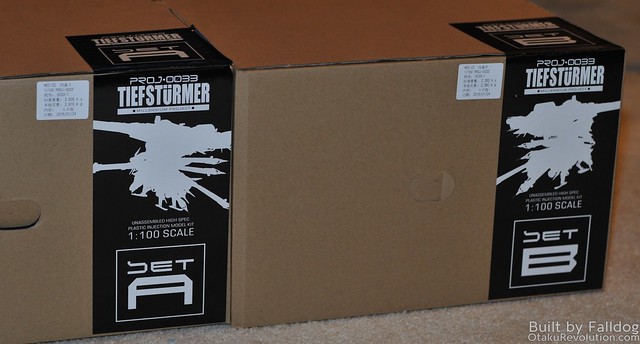 
Within the second set of boxes are all the runners themselves. Runners are enclosed in plastic bags four a time. This many runners in loose plastic together has resulted in a few pieces which have broken away during transport. Be sure to take extra care when removing the runners from the bags.

There are a lot of pieces in this kit, a lot. Over 50 runners, and if the manual is accurate, the entire kit is made of around 1800 pieces (presumably including LEDs and metal decal pieces).

The plastic looks to be of good quality, no noticeable amounts of flashing or mold/C&C markings. The pieces all have a texture to them and I'm not sure if that's by design or whether they just didn't go the extra step and fully sand down their molds. 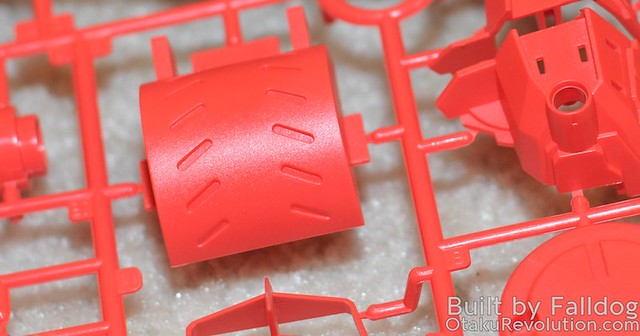 I don't think the texture will make too much of a difference, especially to those painting. If I recall correctly I had some pieces on my Kshatriya that were like that but the texture was unnoticeable after paint. It may be problematic for folks looking to apply some of the large water slide decals on unpainted pieces though.

The kit is predominantly white, with some off-white, red, yellow, and chrome accent pieces.. The red they went with is brighter, almost neonish, compared to the traditional reds I've encountered thus far. It really stands out, in a good way. There are two small runners of green and yellow translucent pieces while the stand is a clear smokey black (like the Seraph Hobby Banshee head). The inner frame is gray, though a lighter shade than we've traditionally seen from Bandai. 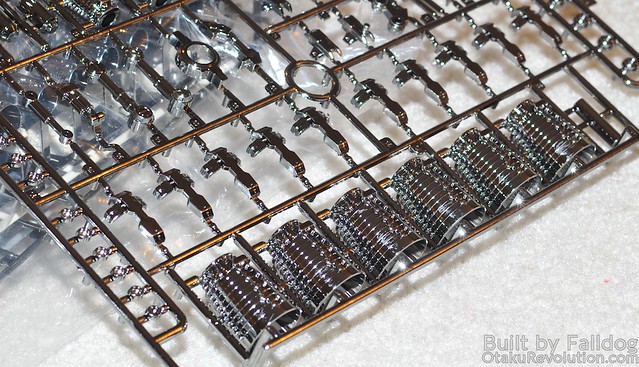 There are a fair amount of metal pieces, such as large chrome cylinders (which are a part of the thruster LED assemblies) and a fair amount of screws & bolts. I recommend getting one of those daily pill container things to help keep them organized. There are some metal detail pieces as well, but not nearly as many as I encountered on my Kshatriya build.

Most notable of the metal pieces are two large metal brackets. These go on the torso near the end of the build to help secure it to the stand. 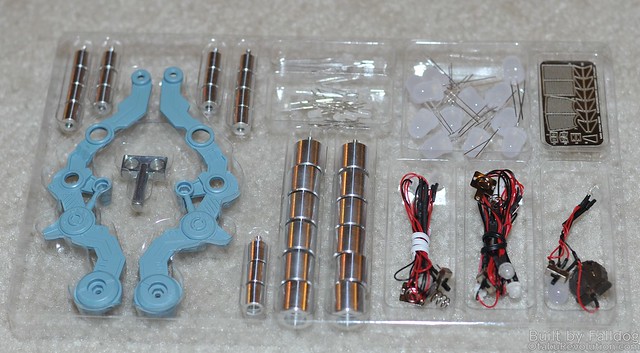 The two blueish parts are the aforementioned brackets.

There are a lot of LEDs included with this kit, by my count around 40 of varying sizes. The ones that that go into the main thrusters are the largest I've ever seen. Unfortunately there isn't a single circuit for all of the lights. There are at least three proper circuits, but based on what I'm seeing while glancing through the guide, way more LEDs than those circuits support. It looks like, in many areas, each LED is powered by an individual and directly attached battery. 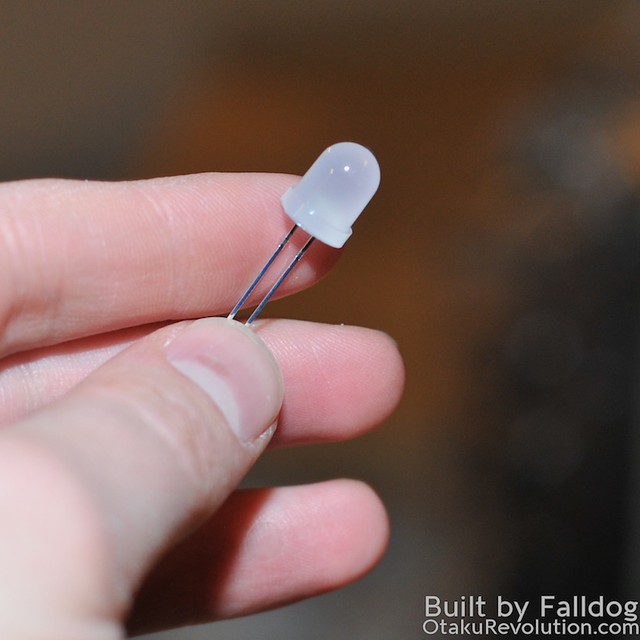 The largest of the LEDs

As for the batteries, you'll have to buy them yourself. And buy a lot of them...

You're probably going to end up spending $50 to $100 just on batteries for this kit. 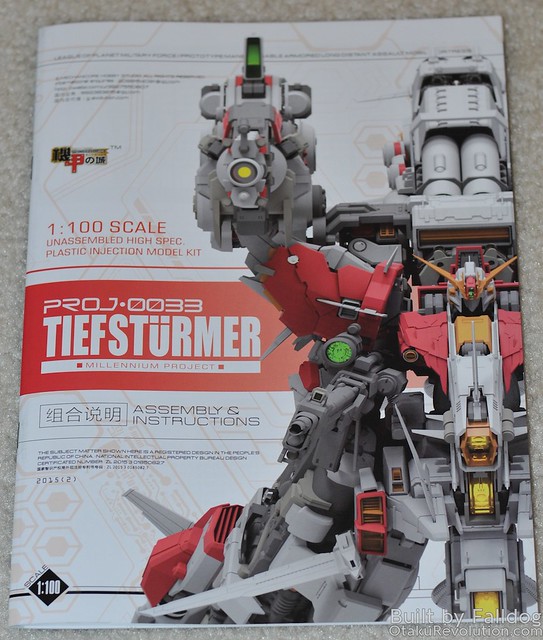 The manual is interesting for a few reasons. For one, it's all in colour as Mechanicore decided to colour code the order of operations. Where normal manuals have regular ol' lines showing where parts go, and sometimes numbers for the placement order, here there are upwards of five sequences in a single step. Instead of labeling each step 1 through 5, they're colour coded brown, red, orange, green, and blue. The definitely seems like it's going to be a pain in the ass to reference all the time.

What's interesting is that they also included an "Appendix to the Instruction Manual" which is essentially a two sided piece of paper with updates ranging from updated step instructions two images of new (or otherwise not previously documented) runners. The updated sections on the appendix aren't in order, page one starts with step 19.3, then 9.3, then 12.6, then 15.3, and then 16.3. It might be a good idea to update your guide with a few notations for each of the updated steps such as writing, "See Appendix," before starting your build. 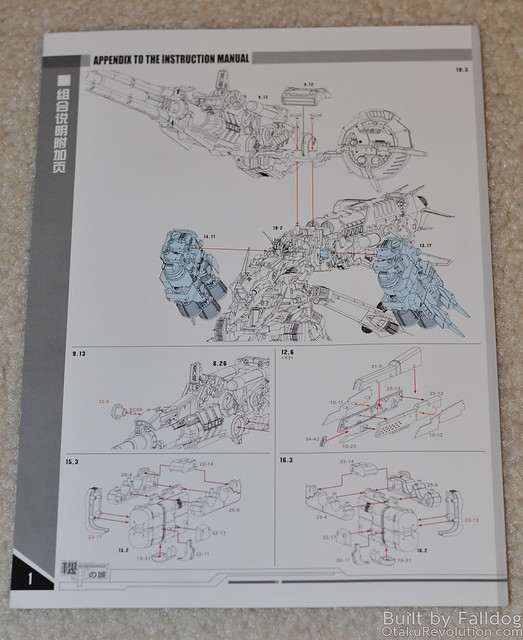 One side of the appendix


What's even more interesting is the amount of fine print in both English and Chinese. There's at least a page and a half dedicated to what you can and can't do regarding claims for bad pieces or other issues with the build. "In case of request/claim from customer regarding any missing parts or accessories, the Product Inspection Stickers will serve as evidence that the maker to judge if that particular case is reasonable or not. As long as the physical weight of the packing shown on the sticker corresponds to the standard weight of it, no claim and complaint for a reason of omission of parts/accessories will be accepted. Customer may need to place a purchase order of parts/accessories if necessary." I don't recall ever seeing anything like this in Bandai's manual, then again their fine print may just be a lot less noticeable. 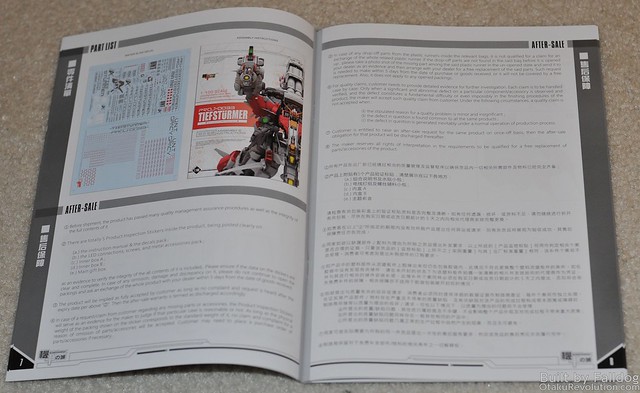 Some of the fine print 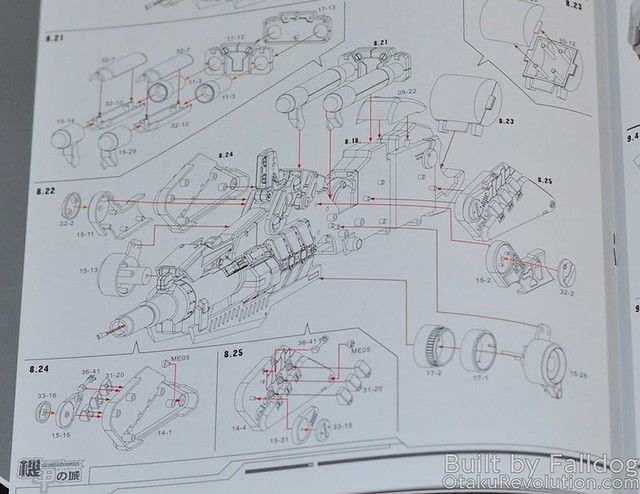 I hope you're ready for pages and pages of this!

It's worth noting that the details, from skimming over the instruction manual and the runners, look to be pretty damn amazing. Lining this kit is going to take forever, and, if you want to paint, the the opportunities for built in colour separation are limitless.

The kit comes with decals, and like the rest of the kit, there are a lot of them.

Well, that's all for now. Later this week I'll start working on the kit. As I finish off a section or two I'll take photos and write up an accompanying review.