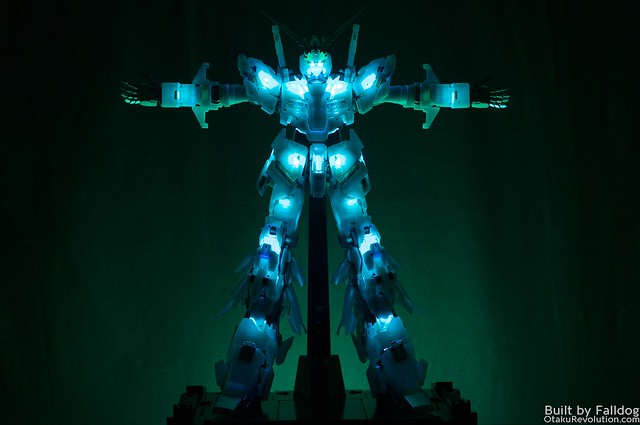 Doing something a bit different with this build and putting all my usual notes down at the bottom. They're poorly written and filled with anger and shouldn't be read under most circumstances.

Forewarning, my camera has a hard time working with all the UV light that seeps through this kit. IRL it looks more green with the LEDs on. So help compensate, here's a mix of LEDs on and LEDs off. 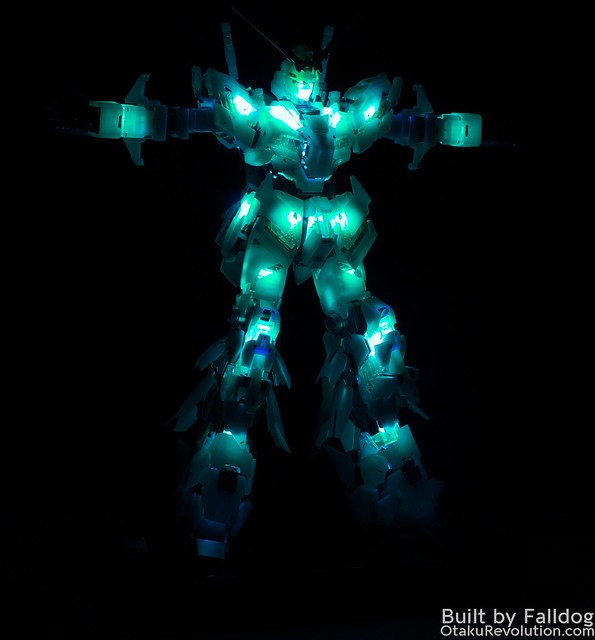 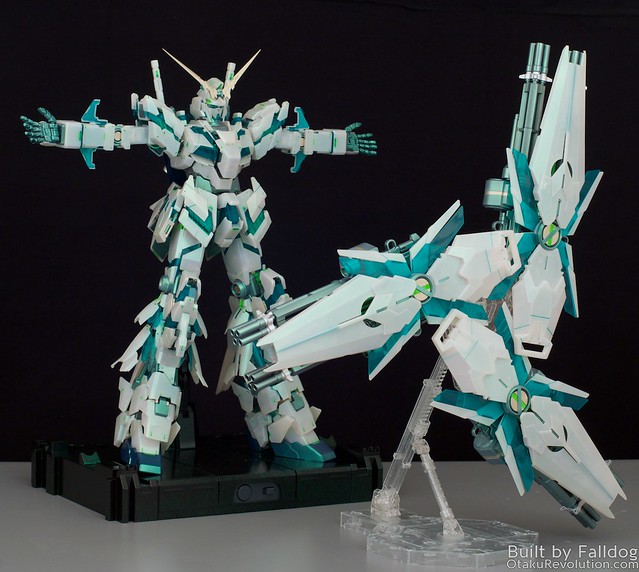 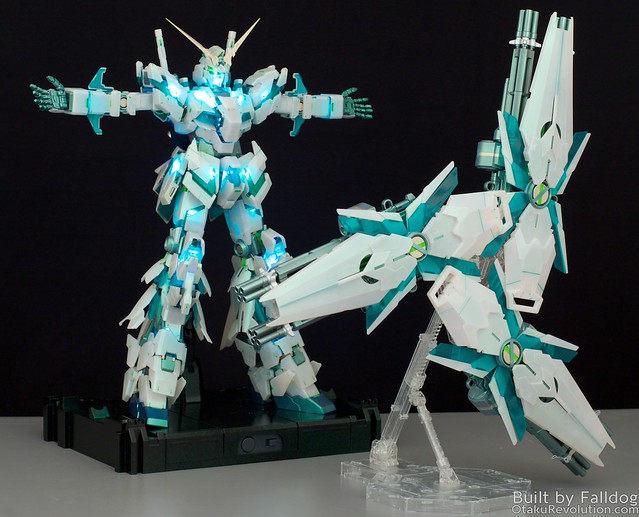 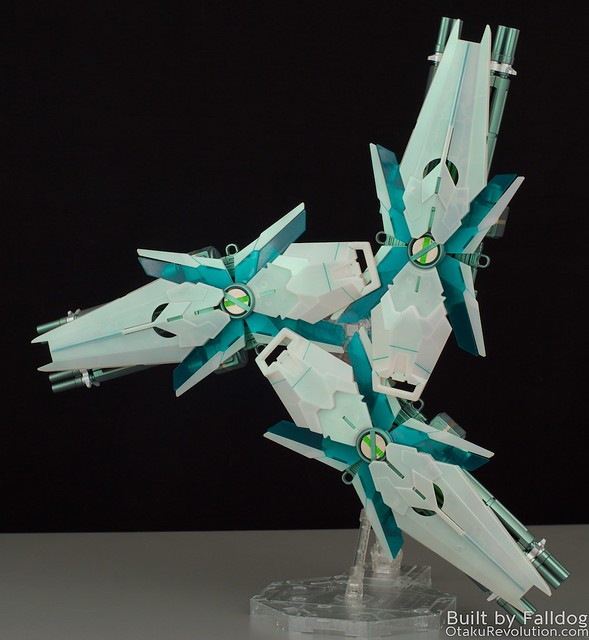 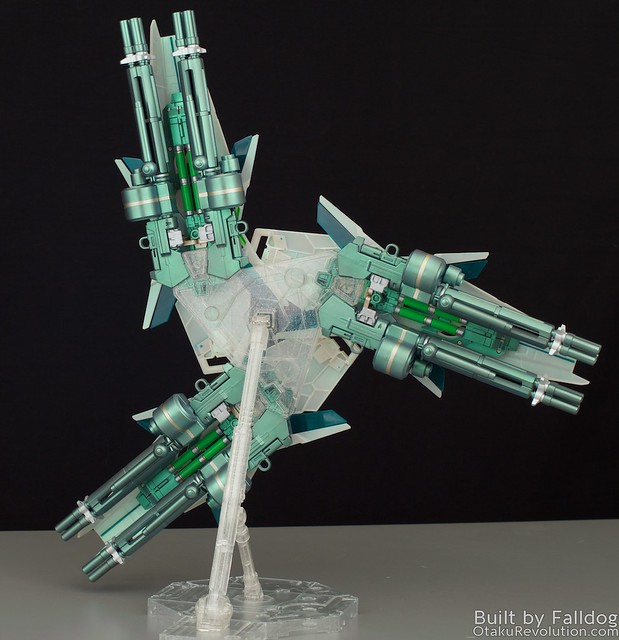 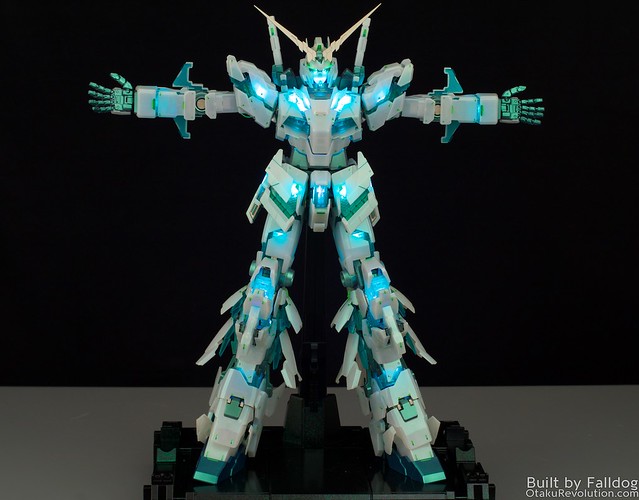 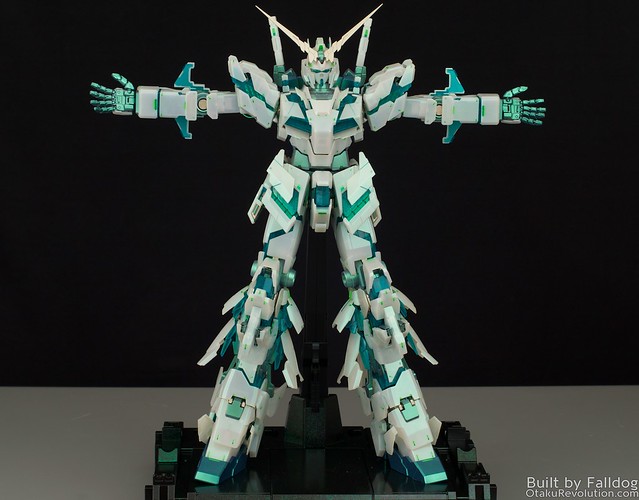 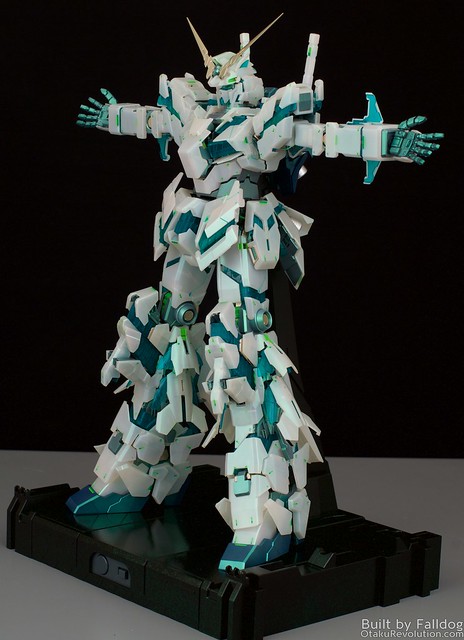 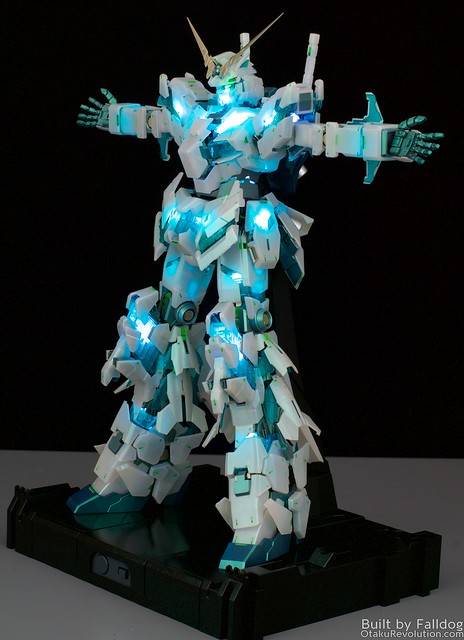 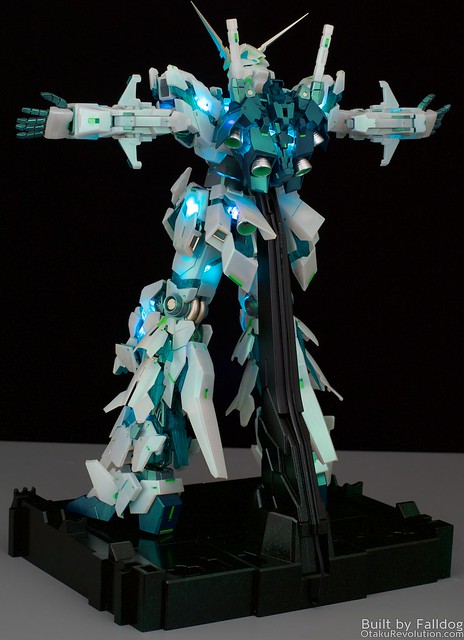 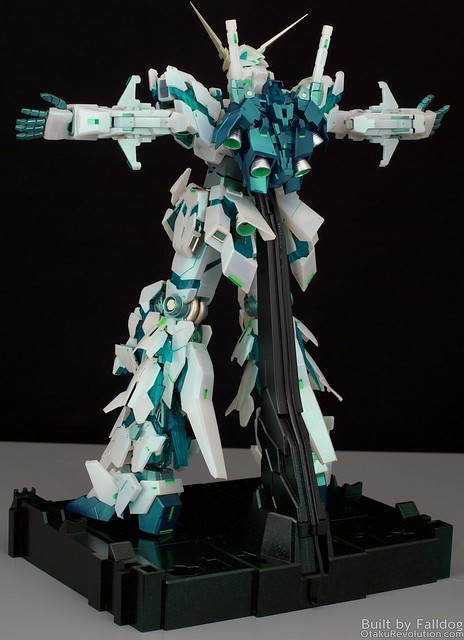 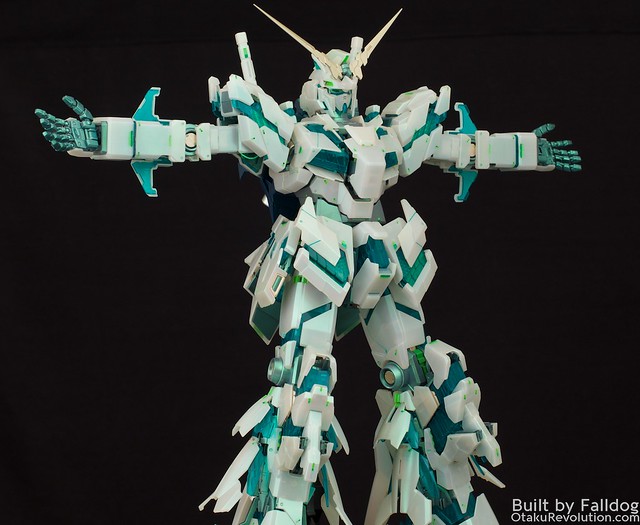 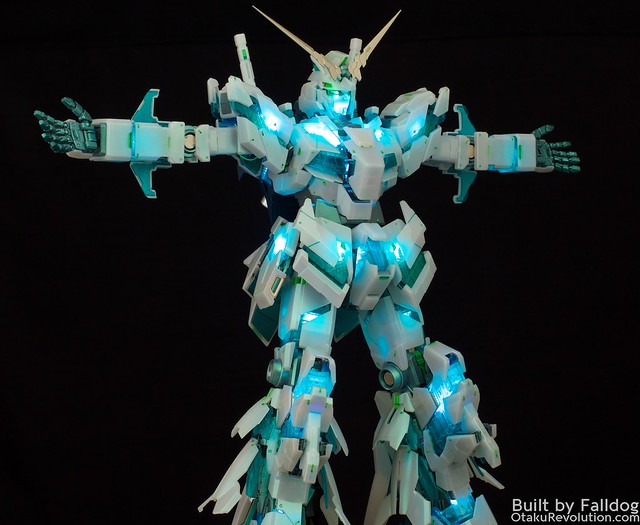 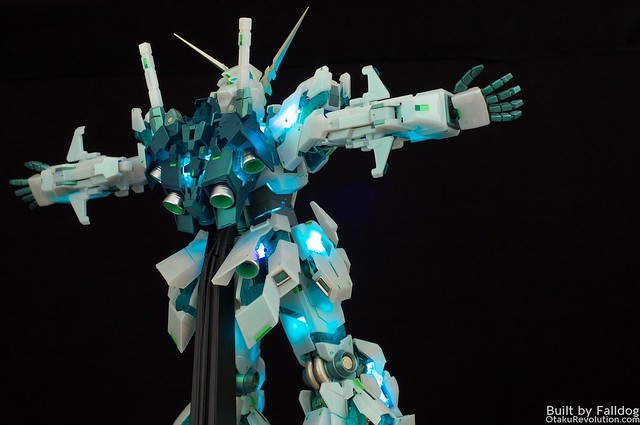 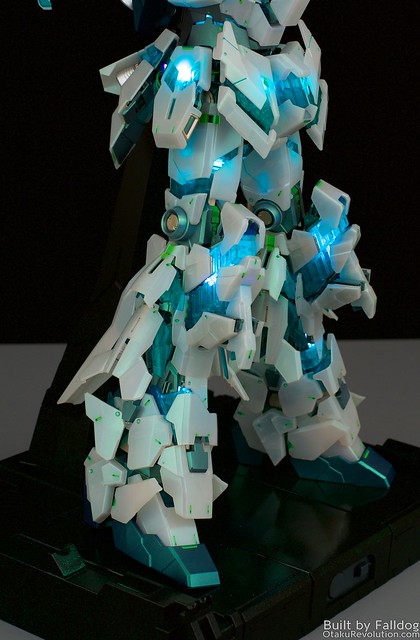 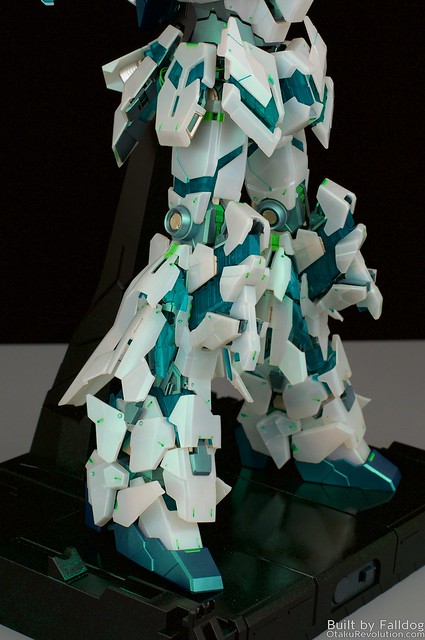 Excuse my French, but what a cluster fuck this build was. Throughout the planning stage of this build the plan went in a lot of different directions but the goal was always the same. Find away to spiffy up the Final Battle Unicorn, like it was about to take on a shot from Gryps, without it going full shamrock. While I was tossing ideas around I saw that the (at the time) upcoming Daban PG Phenex kit was going to be molded in clear plastic. "What a great opportunity," I said to myself, "I can strip the gold for the clear plastic underneath (like my Hyaku Shiki) and make the psycho frame pop." And that's when the build got flipped, turned upside down.

The crux of the issue is that Daban's PG Unicorn Gundam knockoffs are poorly made. 2/3 of the this build is straight from Bandai, namely the green psycho frame and the core frame itself, out of the stupid expensive P-Bandai release. The rest, namely the outer armor, is all from Daban. The first issue I encountered was the plastic quality. Bandai, even when coating the kit with gold for the Hyaku Shiki, used their standard great quality plastic for the runners. Daban's plastic wasn't nearly as pure, featuring a lot of yellow hues (which I was able to mitigate my pearl coat). There are also a lot of weird molding imperfections on the inside of the pieces, almost like they were dabbling with custom design elements. In the grand scheme, those issues aren't that bad. It's how the Daban armor fit onto the Bandai parts that was the biggest pain.

Despite the expected fitment issues on a proper PG Unicorn (namely tight joints that don't take well to being painted, especially with a pearl coat) nothing fit well together. All of the pieces felt like they were just a tad too small, and all the pegs too large. For many of the armor pieces I had to cut off the pegs and just glue it into place (which, in theory, I should've done for the entire kit). In several areas the plastic broke, cracked, or warped visibly, marring the overall look. The general difficulty of assembly resulted in quite a few pieces that were scratched or otherwise still don't fit 100%. This going to make putting Bandai's armor pieces on Daban's frame later an unpleasent experiance.

And, on top of that, whatever green pen I used for some of the deals is the Devil. For the two tone details I tried using this green pen I got from a local craft store. No, not the usual Micron, but a brand sold in the same section. It seemed to work well enough, though even after TWO top coats of the pearl paint, and more than enough drying time, it still came off on my hands during assembly. How the fuck does that happen? I ended up just using paint for the second half of the build.

For the paint job I tried to keep things a lot more simplistic than my previous build. The frame itself is all pearl green, some light gold, lime green, and silver highlights here and there. Neon green was used as the main accent color, with a few various shades of darker green to accent the accent. The green frame is Mr Crystal Color's Tourmaline Green. I also used that on the armor for the pearl effect. I'm not a big fan of pearl, but I think it really worked well with this kit. The green pearl on the blue parts though, somehow I think that ended up being magical. In some light it's green, in others it's blue. May have to use my remaining paint on a blue kit at some point and see how it looks.

For now, though, I'm going to work on a MG kit. A proper Bandai kit. That has less than a billion pieces. I can't wait!