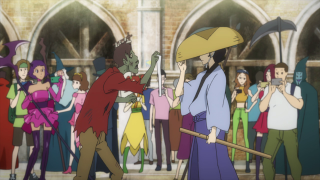 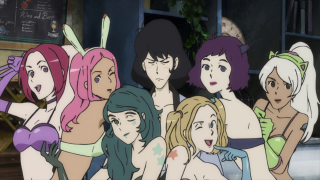 Synopsis:  Goemon finds himself in a quaint village looking for the owner of a jewel Lupin wants. The jewel's owner, Chloé, runs a struggling bistro and Goemon keeps surveillance on her, saving her from others wanting the treasure. But the more he gets to know the town and its people, especially Chloé, the harder it gets for him to snatch the item. Can Goemon overcome his feelings and pull the job off or will Lupin have to finish it for him? It's con vs con during a con, as our favorite modern samurai walks among the cosplay crowd! 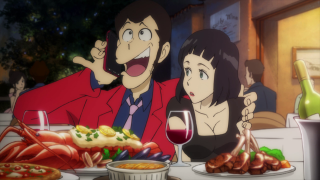 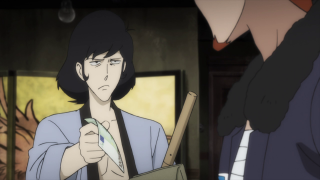 Here's a unique setting, a quaint French town holding a... uh, is it an anime convention or just a generic nerd convention? Dropping Goemon into it makes a kind of sense, since you would expect somebody to cosplay as some kind of samurai character. Of course, placing the anachronistic swordsman into this situation is obvious to play off his confused reactions to modern day fanboys. Somebody like Lupin or Fujiko would have made it their mission to blend in, and I could totally see either or both of them cosplaying, even Fujiko becoming a "booth babe" (though she'd make sure the geeks don't touch her). Jigen, ehhh, he'd probably be nearly as annoyed as Goemon, but maybe he has a favorite seinen manga. As you'd expect, Goemon, while aesthetically fitting the convention, is frustrated and irritated inside.

He spends a lot of time in surveillance mode, checking to see if the thugs the original owners of the gem hired are making their move. In the meantime, he gets to know a kid wearing a pseudo-Naruto costume (complete with pussy deflector, dattebayo), a private security agent (who must've thought those Fruit of A Loom commercials were amazing), and of course, the woman he knows as Chloé, who seems to be struggling to make ends meet as a restaurateur. She's a gentle soul, but she has perseverance, not seeming too rattled by her dearth of customers. At least she manages to get a little business when Goemon becomes an attraction. There's not a really that much more to say about her, she's your typical one-and-done  character who Goemon has a reluctance to steal from, as she's not the usual scum or big, faceless establishment the gang steal from.

I mean, the only reason Lupin seems to want the pendant to begin with is to court his latest potential conquest. He's super shameless about it to after a while. I guess she's going to be upset that he couldn't get the gem for her, but he can find another lady to romance in no time. It is amusing when Lupin just blatantly uses his crew to snatch something for the sake of getting a little trim. But it's not like Goemon's life was in any major danger in this episode. The worst that happened to him is Lupin drugging him.

I think my favorite running gag in this episode is how Goemon is constantly being shaken down. It's 200 euros for each night at the inn. Food is 50 euros. He pays Sirena Security guy Bruno 100 euros for information on the real Chloé and a fat stack to get him to watch over her while he rests. Then the final bill for all the activity at the inn has him asking "Chloé" (Inés) if he can work at her restaurant so he can afford to pay it. Earlier Goemon tells Bruno "Money is no object,"  but it certainly becomes one.

Lupin, unlike Goemon, doesn't usually have a lot of scruples when it comes to who he'll lift from, so he's more than willing to take the pendant off Inés and just be done with the job. But then when he realizes it's a fake (the real one is being sold by the real Chloé elsewhere), he's willing to draw the heat off of Inés, only getting a missile fired at him and Goemon swiping at him for his good deed. At first I thought Lupin had been Bruno the whole time when he ripped the mask off, but I suppose then he would've had to be in town that whole time, instead of one of the other locations he and Jigen were looking. The twist is a classic Part II-style resolution, one that's kind of eye-rollingly cliche, but works within the frame of this narrative just fine. The point isn't the plot, anyway, but Goemon's conscience.

Overall, a decent episode, but like the last one, not really a stand out when it comes to the standards set by the story arcs. Speaking of which, next week's seems to start a new one, as they bring back Ami and introduce one of her classmates. I'm happy to see Ami again. I wonder if they'll also bring back Albert at some point. Maybe Rebecca and Nyx from Part IV? I won't count on that, though. 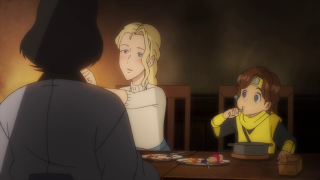 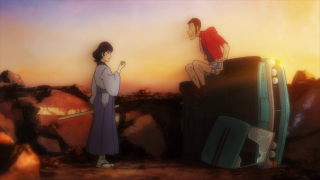