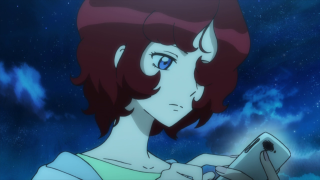 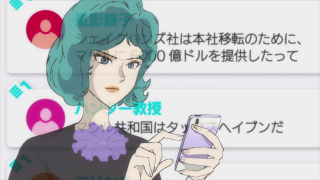 Synopsis:  Fujiko is a prisoner of Enzo, the head of the Shake Hands group responsible for PeopleLog and Lupin's current professional woes. Our sideburned swindler storms the headquarters with Jigen, Goemon, and Ami, to save Fujiko and take apart the pernicious program. However, incensed about being referred to as merely "Lupin's underling", and egged on by Enzo, Goemon makes a startling decision that halts the entire operation. How will Lupin answer Goemon's wavering blade? No matter how you slice it, the ending of this entry is unforgettable! 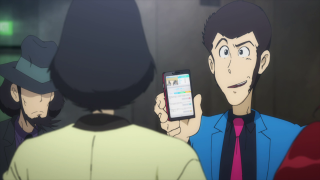 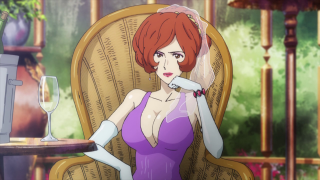 Close to the conclusion of the series, TMS delivers a pretty sharp blow (almost as cutting as them flagging my review videos of Lupin and Detective Conan titles).

It's strange, but this is the second time this show frames an antagonist as a smirking sociopath at first, but then shows that his intentions, if not the justifications for his methods, aren't that terrible. They started this with Albert in the second story arc, devious, every bit the match for Lupin, shoots him during their first confrontation. We're set up to hate this guy because he's opposing Lupin, but isn't as endearing as ol' Pops. But we learn that, while still a little suspect in his reasons, Albert isn't the evil bastard he's painted as at first. That arc even ends with a little bit of Lupin and Albert bonding and a little more friendlier rivalry with his old partner.

When Shake Hands first appears in the Padar arc, Enzo is this enigmatic figure who, while helping the king regain his control of his country, seems to have big ambitions and a devious grin. In this current storyline, he's in opposition to Lupin by making it difficult for him to disguise himself, and now he's even captured Fujiko and turned one of his allies against him.

But here, at least according to his subordinates' conversation with Fujiko, the reasoning and ideals behind his actions are commendable. He wants to create a world where people like his daughter don't just slip through the cracks and disappear. If PeopleLog keeps track of people, it will avert future tragedies. And really, who is Enzo fighting against? A band of thieves who use disguises to steal from others, who hide out while taking advantage of other peoples' good will under false identities. It's easy to see him as being underhanded when he's activiely sabatoging Lupin's group dynamic but he may not be the monster he appears to be at times.

Probably the biggest draw of the episode is the actions of one Goemon Ishikawa XIII, our favorite OP walking ananchronism. It's difficult to utilize Goemon just right, because he can basically do anything with his sword and so you have to find just the right balance with him and how you handle his character. As Goemon lamented earlier in this series, perhaps Lupin never really needed either he or Jigen. However, he finds it distasteful to be referred to as if he's just one of Lupin's peons, just a tool in his tool bag. Enzo convinces him (and is trying to do the same with Jigen) that he's just another treasure to Lupin, just part of his collection, because that's what Lupin does, he collects specimens.

However, I would argue that while Lupin, on some level, DOES see his group as tools in his bag, or as treasures, he doesn't discard them or keep them to himself. He's not overprotective, he lets them live their own lives as they will. He's not caging Fujiko (something Enzo has literally done) so she never looks at another man, for instance. If all these people were to Lupin were items, he would treat them like items, but he gives them just enough attention and gives them just enough space so they're neither disposable nor exclusive to him. The world, Lupin believes, is his, but the real treasures are the ones he treats the best, that he can't possibly live without. Not just because they're useful, but because they're valuable as people. If they were just professionals working together, he wouldn't go out of his way for them so often.

Because Goemon is so powerful, the only real way of getting at him is psychologically, but downgrading his self worth and honor. By asserting that Lupin sees him as just a lackey, Enzo has convinced Goemon to reassert his own place in the world by challenging the very notion of their partnership the only way he knows how - by the sword. It only takes a moment for Lupin to accept that challenge, knowing that Goemon is serious and he would be offending him ever more if he didn't fight back. Ultimately, however, it remains to be seen whether Goemon legitimately struck Lupin down out of superiority of skill, Lupin couldn't bring himself to kill his ally, or it's some kind of elaborate ruse.

Given all the blood, I'm guessing it's not that last one. But who knows with Lupin? Mirrors within mirrors.

Of course, the episode's revelation that Ami is Enzo's missing daughter is hardly a surprise given a specific guess of Ling at her fate that basically gives away the game before the five minute mark. Still, it does seem natural enough, with Ami having inherited her father's talent with technology. I wonder if he knew she was in Padar at the same time he was. Or even if he knew she was still alive. Obviously Ami has made no real attempt to contact or reunite with her dad since Lupin took her under his wing, but maybe he had enough clues to put it together, thus putting him on Enzo's radar to make an example of for PeopleLog.

Anyway, I hope this last arc at least continues at this level of quality. Good material. 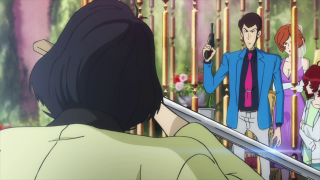 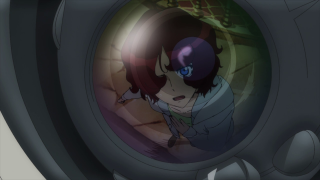