2012 may not be over but my latest project, the 1/35 Hard Graph Semovente tank from Gundam's Universal Century's, has been wrapped up. 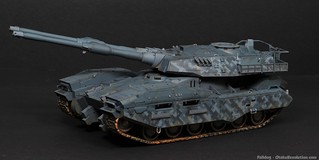 As usual, my blabbering about the project first and the rest of the pictures are down below.

Overall she was fairly quick build, the first coat of paint went on Nov 30th/Dec 1st sometime. The tank is a huge beauty featuring sturdy construction and a ton of detail. There's so much detail on this that it puts a lot of normal gunpla kits to shame. Welds, stippled areas, and hatch hinges and clasps galore. I understand why folks love to build model tanks. For me, however, it was bit detour from what I generally do. At first it was odd working with such large and small pieces but it's easy to get a hand of. Unfortunately it's a lot easier to apply too thick a coat at a one time so I had some bleeding around parts of my camo masking. I didn't want to do anything too traditional whether it be the desert tans colour is designed in or forest greens. At first I thought of doing a dark grey theme styled after some German WWII tanks but instead went with a custom blue grey colour, imagining a tank sneaking around in a foggy British winter. I left a bunch of tools off the kit, along with the scale figures. Maybe one day I'll have the room to build a diorama so they'll be stashed away until then.

For those interested in what paints I used... I started by priming all the pieces with Krylon grey primer. The shocks got Rust-Oleum silver I had laying around and the tracks were detailed with Model Master's Chrome. Everything else was completed with Tamiya paints. The base blue is actually a 50/50 mixture of Field Blue (XF-50) and Neutral Grey (XF-53). The same Neutral Grey and German Grey (XF-63) were used for the camo. Neutral Grey was used on some other pieces as well while I used a lighter grey, ironically called Dark Sea Grey (XF-54) for a few detail pieces. For dark detail pieces I used some Gunship Grey (TS-48). The other silver details were finished with Mica Silver (TS-76).

The weathering turned out... alright. Really though, I'm not to pleased with how it came out. While doing research into possible techniques to try out I came across many an excellently weathered military model. I keep thinking back to lose, then looking at my kit, and remembering why I never hate weathering. There are a few areas where I went too heavy right off the bat or completely messed up the directionality. For the weathering I used two Tamiya weathering pallets, B (Snow/Soot/Rust) and C (Orange Rust/Gun Metal/Silver). The tank treads were dry brushed silver first I used the "Orange Rust" as mud.

If you've made it through my intoxicated recap of this project without any issues my hat's off to you. Paint samples of the colours I used will be added to the guide, hopefully soon. Same goes for a camo tutorial featuring pictures from this project! 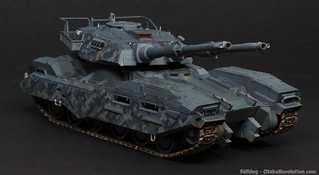 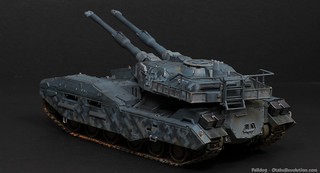 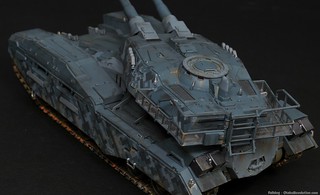 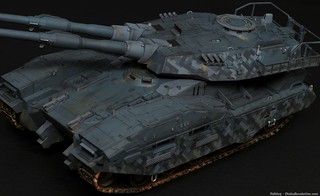 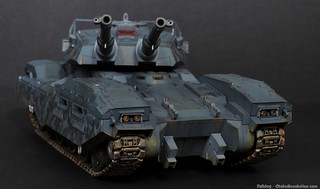 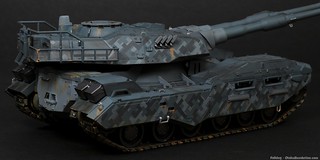 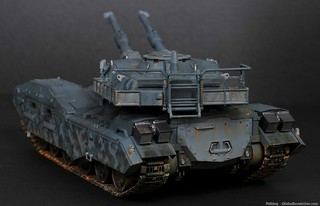 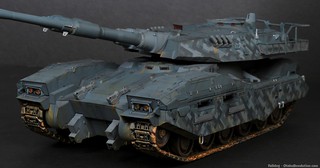