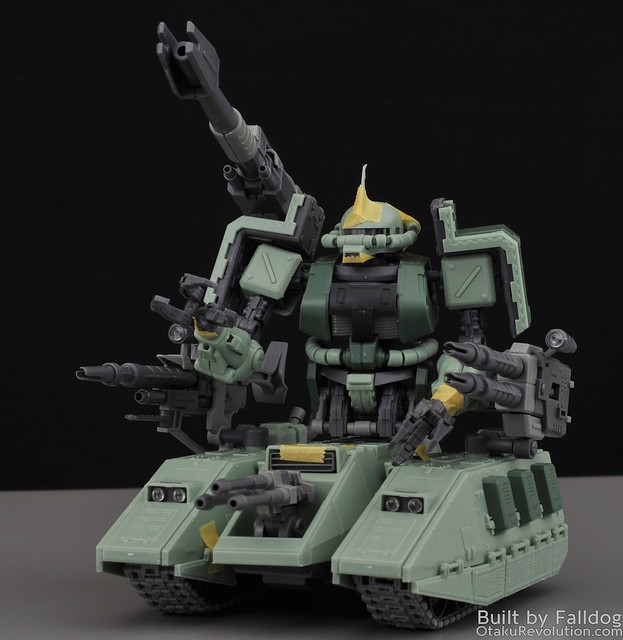 I recently picked up a built Motor King’s 1/100 scale Zaku Tank. Unfortunately August has me running around super busy so it was nearly all I could do to simply build this thing in the first place. So, instead of a super long wordy review, here's a relatively short one with some simple photos. If you want more specialized photos, like the runners or how the kit looks with the LEDs installed, check out Samuel Decal's Facebook album.

For starters, I don't really know much about Motor King, so I'm not sure what they've done before. As such, I can't really compare it to any of their past kits, but I can compare it to Elyn Hobby/Mechanicore as I have built some of their third party kits. More on that in a bit. When you get MK's Zaku Tank you get 16 runners, one of which clear, one of which is a handful of polycaps. You also get 10 LEDs and enough cables and resistors to write them up into a single circuit. Soldering not included. I'm fairly certain everyone is supposed to get the LEDs, but at least one person I spoke to was left hanging. The wiring diagram is printed in the manual, and a few screws come in the same bag, so I don't think it's a pre-order only bonus (I didn't pre-order). There are some water slide decals in there as well.

The Zaku Tank also features a pair of guns that mount on either side of the tank, a gun mounted in the very front, and a larger one over the shoulder. There are two sets of hand options, the first being claws and the second regular ol' hands with independent fingers. Each tank tread is made of 49 individual plastic pieces. It's been a long while since I built anything Zaku related, and the Bandai tanks I've built featured rubber treads, so I can't comment on how much of this kit is original and how much is pilfered from existing products. 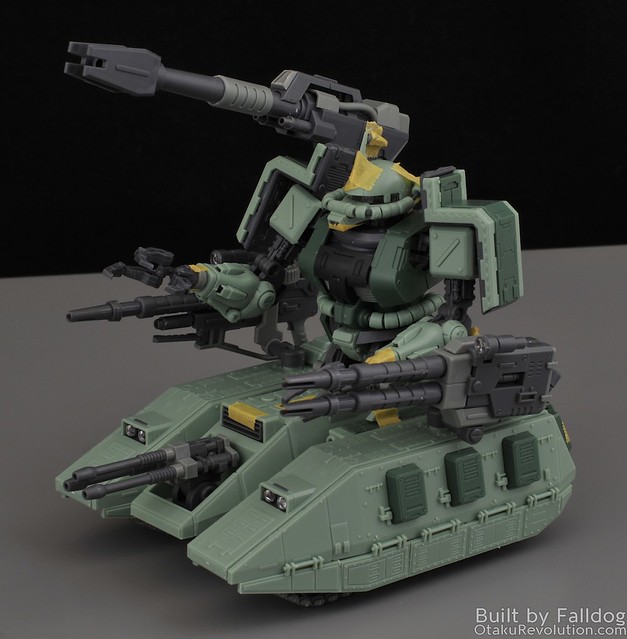 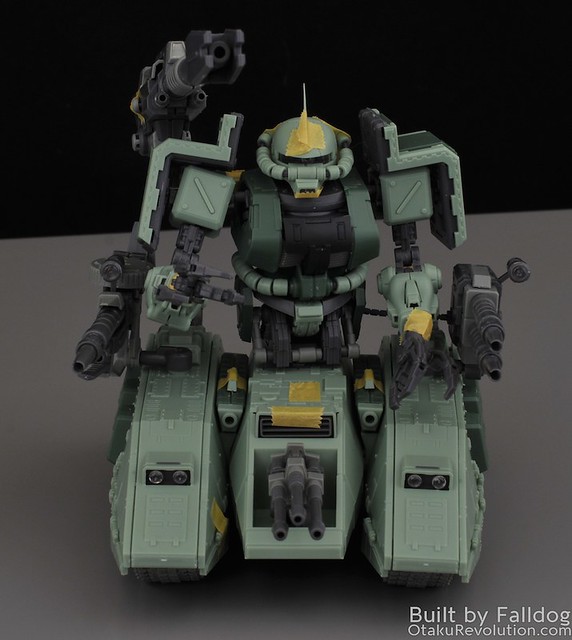 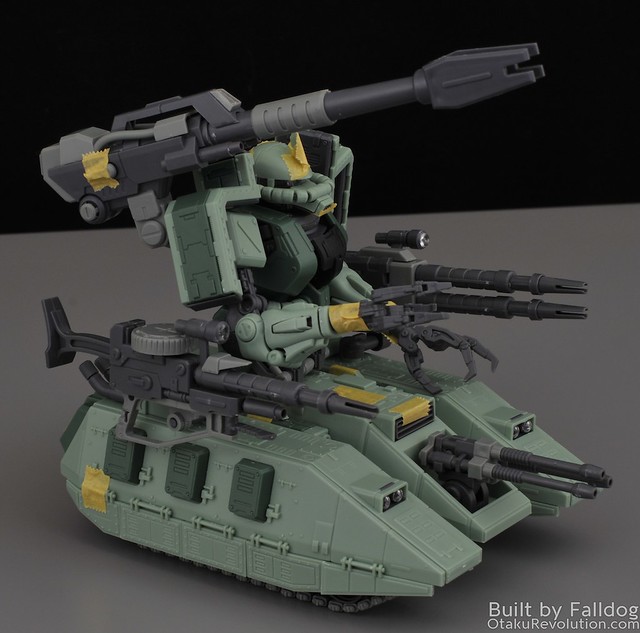 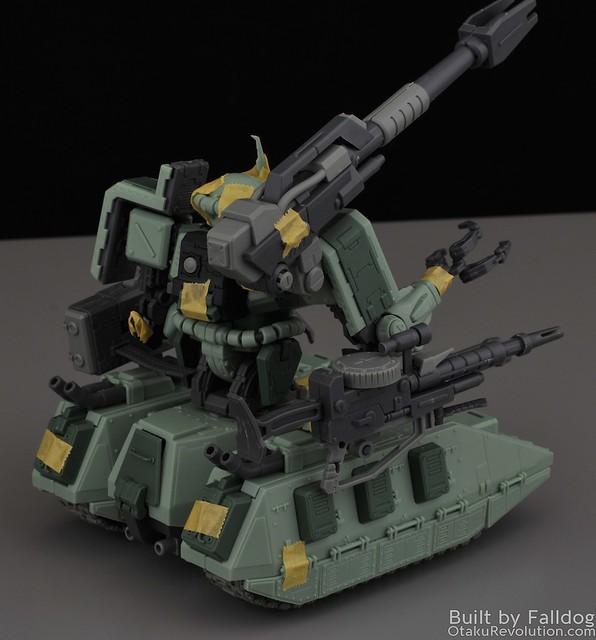 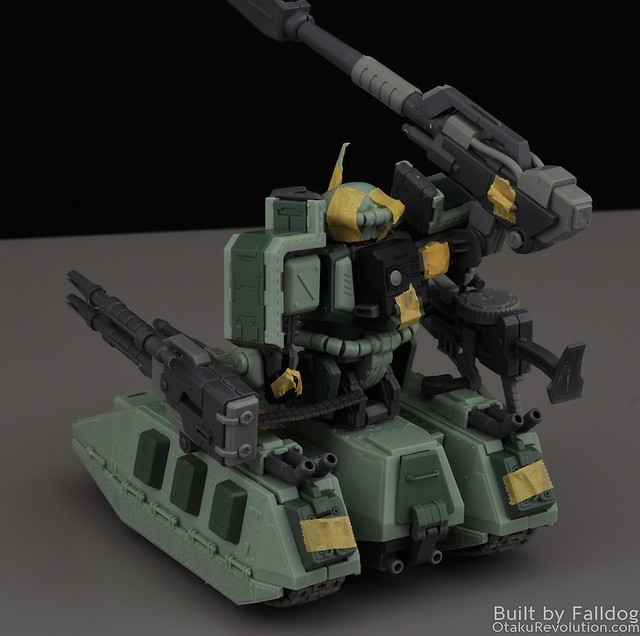 First thing's first, how's the quality of the kit? Well, it's okay. There are a few issues here and there, most stemming from the quality of the plastic and the fitment of the pieces. When building this kit, you'll never forget that it's a third party product. The plastic quality, the mold quality, and the over all fit of all the pieces pale in comparison to the real (Bandai) deal. That said, I didn't hate my life building this kit like I did when working on Mechanicore's Teif Sturmer. My kit, as it stands now, was built with very little effort in getting things to fit. Unlike previous third-party experiences I didn't feel like I had to spend ages widening holes or hopelessly wondering why things don't fit like they should. What you see is the in the photos is how everything looks out of the box, issues and all. Clearly a bit more effort on the part of a builder should be able to properly assess any fit issues.

The biggest fitment issues for me where the claw hands, which oddly enough feature a socket design, instead of a peg design like the hands. The socket design is weird, giving allusions to an amputee fitting a prosthetic, and the overall fit causes them to fall off constantly. Why not just have a peg like the hands do (not [photographed because the fitment of the hands is too loose to keep the fingers from falling off without modification)? The torso piece didn't fit 100% in, nor do the arms. Everywhere else you just have gaps from fitment issues and seam lines that need work. 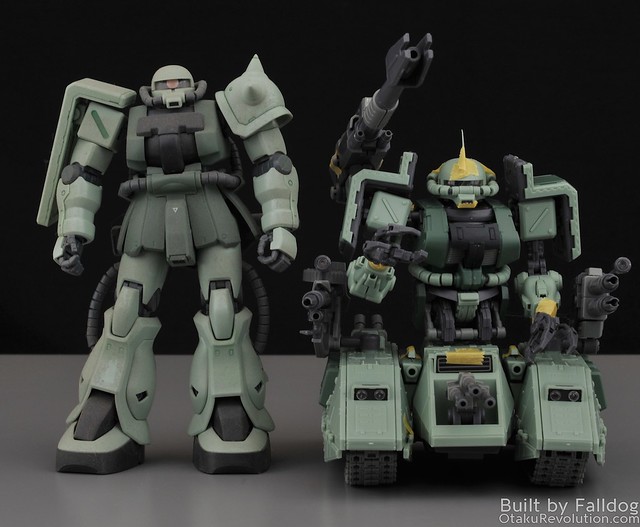 Over all, the molds for this kit aren't that bad. Very flew flashing issues, quite a few mold seam lines, but no parts that were messed up. Some of the nub placement is less than ideal, particularly on the individual tread pieces. Each end has a pair of bumps, like little nuts or nobs, that give the tread depth. MK made the runner connection right between these, meaning you can't just sand the piece flat. For nearly 100 pieces you'll have to carefully cut out and sand nubs without messing up fragile bits on either side. I can see the plastic quality being an issue for some folks as well. There are some super terrible awful nub marks, plus quite a few compression/deformation marks (the white ghosting you see when a piece bends) resulting from the aforementioned fitment issues. Thankfully they can be easily covered up via paint.

The dumbest part of this kit are the guns that mount on the side of the tank. They really clutter up the look of the kit and even limit the ability of the limbs to move around and look decent. There's also supposed to be an ammo feed from the back of Zaku's torso to the double barreled gun but it's too short to really work, let alone when the torso is turned to one side even slightly. The lower skirt armor that covers the tank treads is gimmick free, they don't lift up or move about. It's a shame because the inner workings of the treads are quite cool. 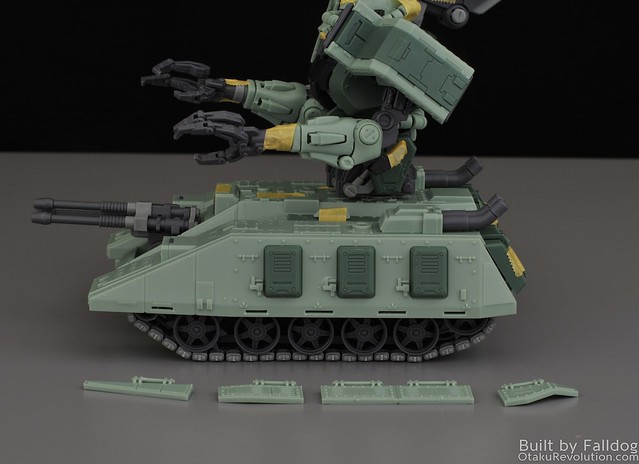 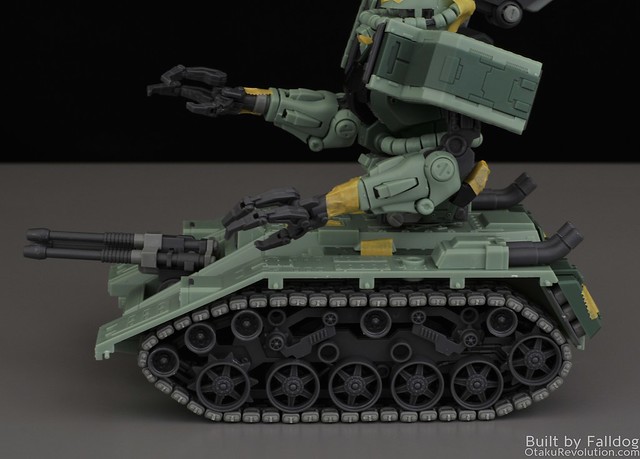 From an instruction manual prospective, there are quite a few issues throughout but nothing that should hold anyone up. This includes pieces whose numbers don't match what's on the runners, pieces that aren't labeled at all, pieces that were already used in prior steps, pieces that are in the diagram but don't get added later, and pieces that are added in steps later than they really should have been.

That's about all I have to say about this kit. Maybe it says something that there's not a lot to write, nor a lot to hate or love, about it. If you have any questions please ask!