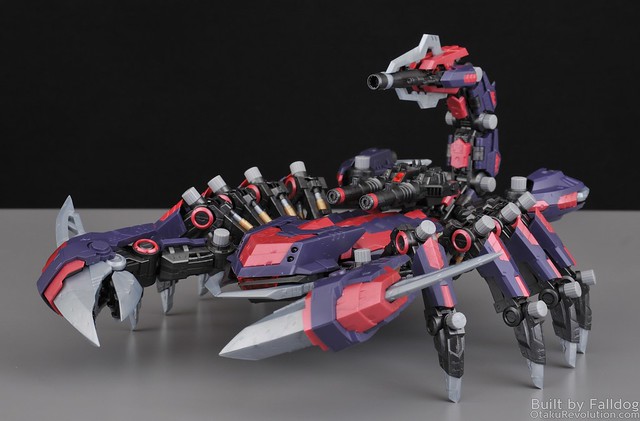 If you’ve read any of my Kotobukiya kit reviews in the past you’ll know that I have somewhat of a love/hate relationship with them. They always look fantastic and are loaded with detail, sometimes above and beyond what you’d expect from the kit. They’re also very hit and miss when it comes to engineering/build quality, most feature one or two areas that are a frustrating pain in the ass. The HMM line is no different. Of the 8, I've built thus far, including the Death Stinger, the Death Stinger is only the third that I'd recommend to the majority of builders. 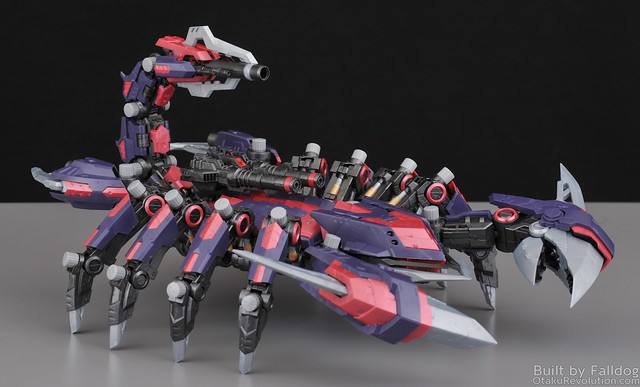 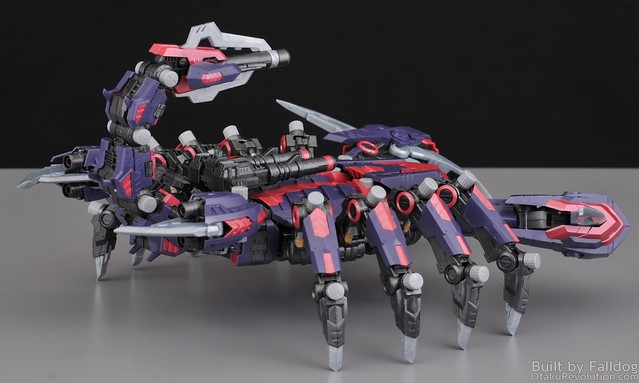 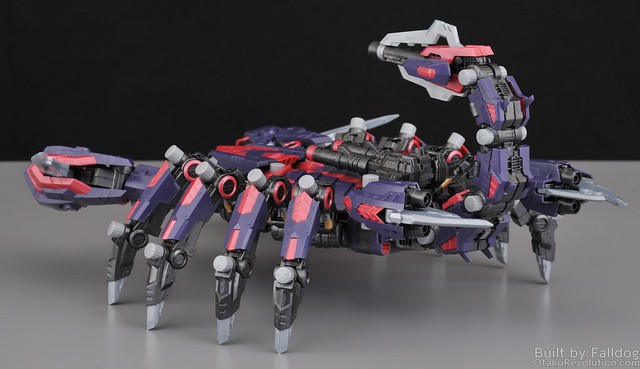 The head of the Death Stinger features two sets of movable mandibles. Above the mandibles the amor lifts up to reveal the Zoid's cockpit and a cool set of insect-like sensors. There's a little seat in the back for a pilot as well. 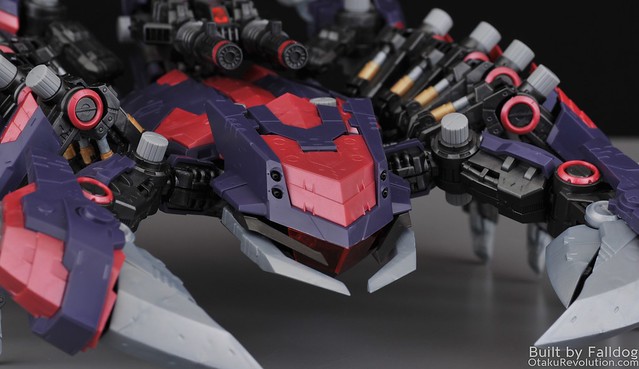 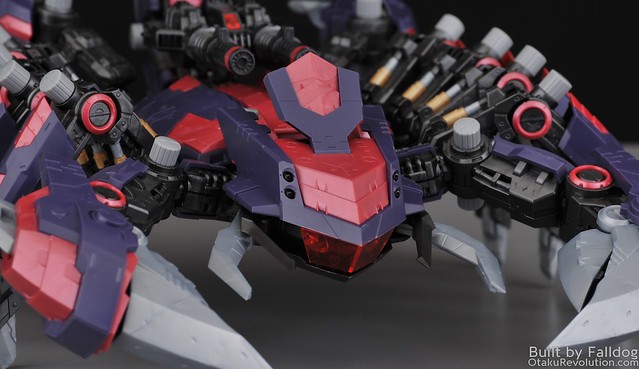 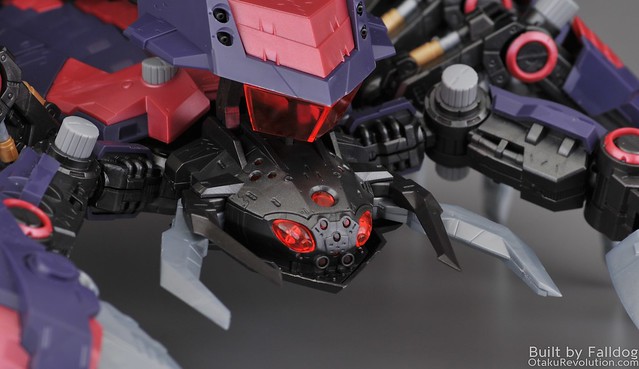 The kit is supported by a set of eight independently moving legs. Each of these legs features three points of articulation, all supported by stiff poly-cap joints. The legs may twist out of the main body after a bunch of play but it has yet to be a real issue. All of the joints are strong and do a great job holding up the kit. Four of the legs, in a walking pose, are more than enough to support the kit while maintaining stability. Thus far, I haven't had any sag issues with the legs (or any other joint on for that matter).

In addition the pointed feet also open up to provide a bit more surface contact if you need it. Since I haven't had any issues with the points of the feet themselves I think it's a somewhat silly addition as it makes it look like the Death Stinger is running around on 4 pairs of stilettos. 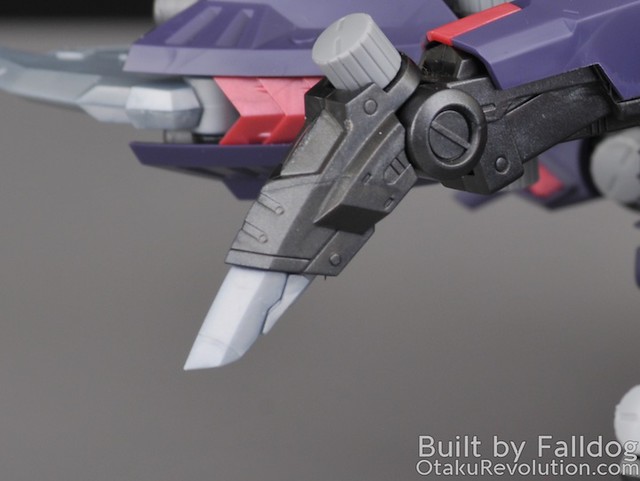 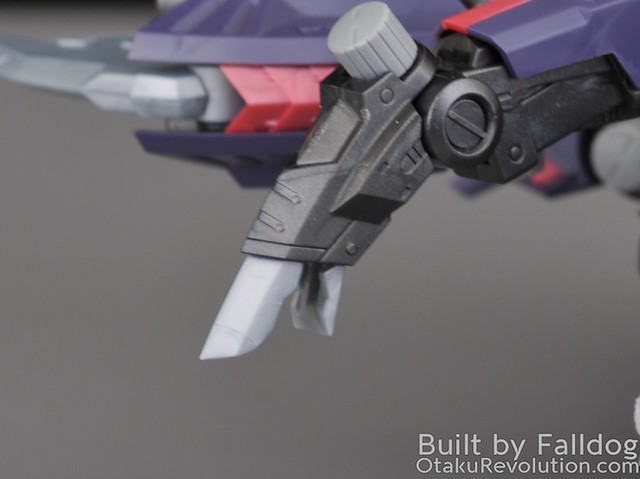 The Death Stinger is certainly headed into combat with an impressive array of weapons. For starters, there are the massive main claws up front. The claws are connected to the kit through multiple articulation points and, despite their size, have no trouble being held in place by the poly-caps. There's good bit of range in the arms, and the claws themselves, with extendable cannons hidden in each of the claws. 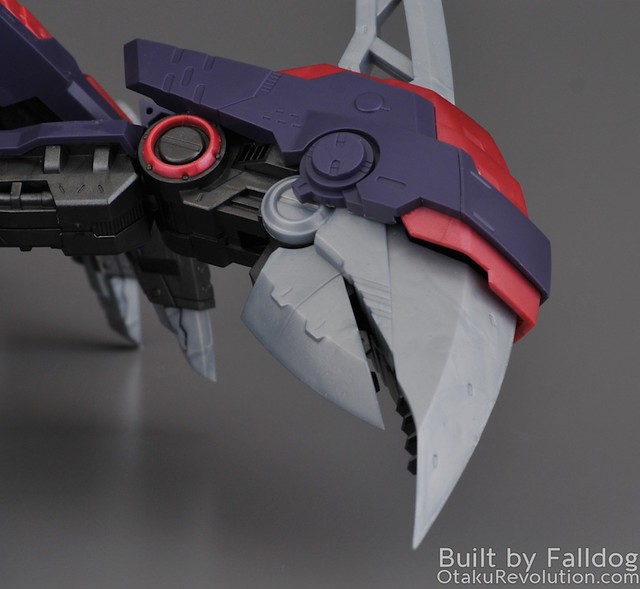 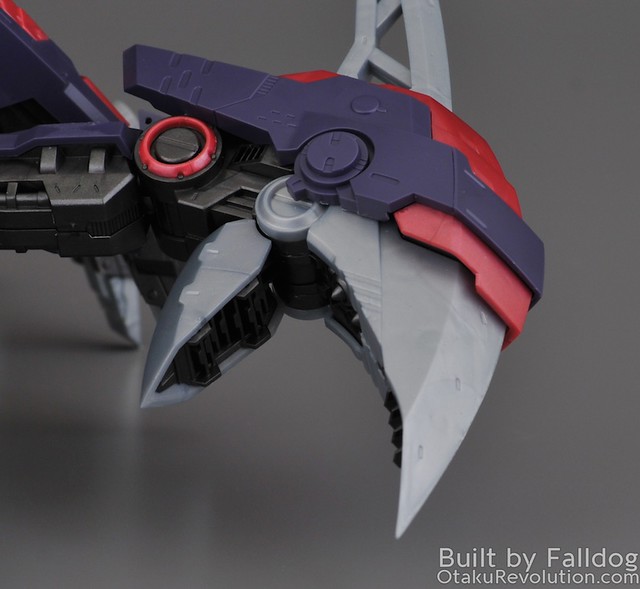 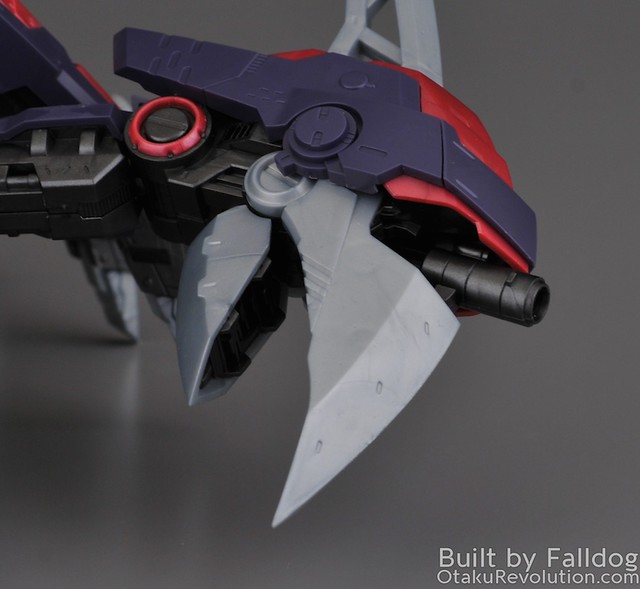 On the rear of the Death Stinger there is another pair of claws, and boosters/cannons (not sure which). 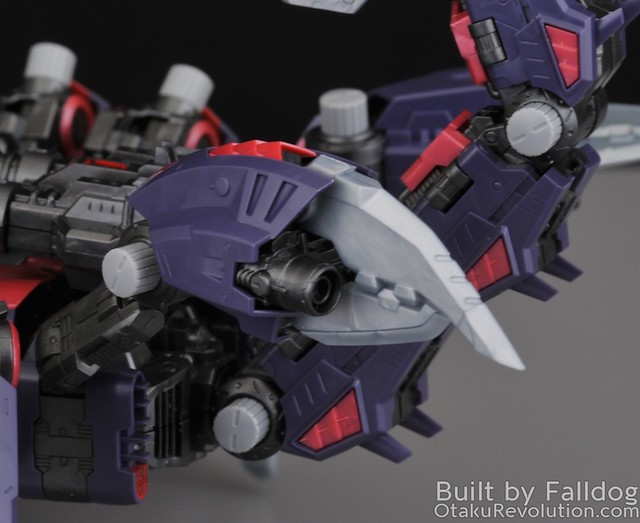 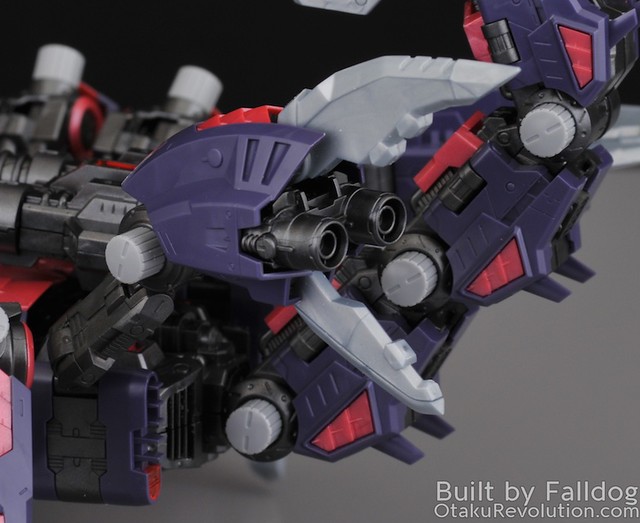 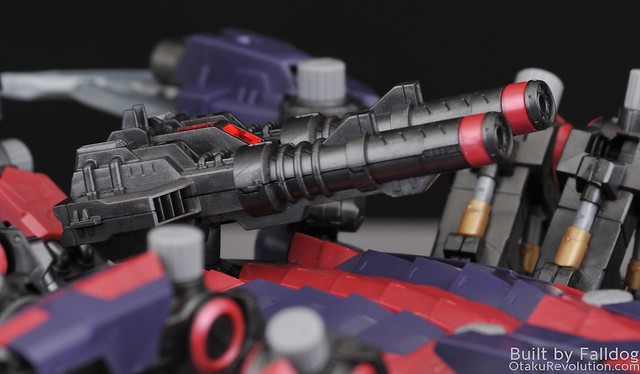 There's also a rotating cannon mounted on the back of the kit.

The primary weapon is the giant cannon in the scorpion tail, the Death Stinger's death stinger so to speak. There's not a whole lot of left right articulation to it, but there's enough bend in there to get a nice curve out of it. Once again, the poly-caps Koto uses are more than sufficient to support the weight.

At the top of the tail is a pretty heft cannon and some more claws. The cannon extends and a set of smaller cannons to either side expand outward. The armor on the tail also flips open, sort of like the armor on the Death Sauer series. 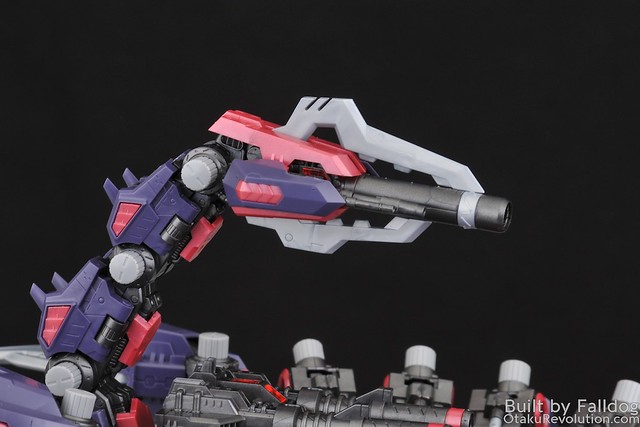 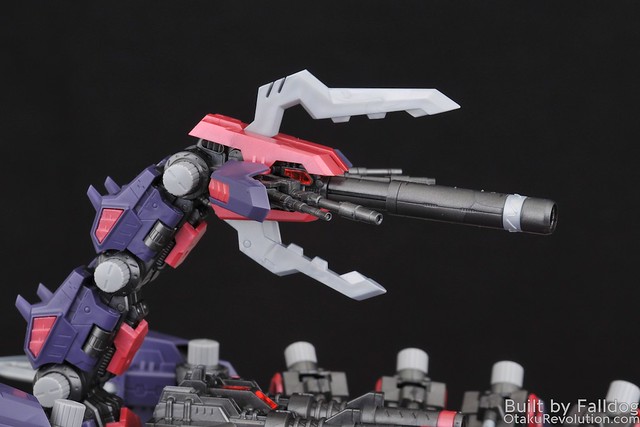 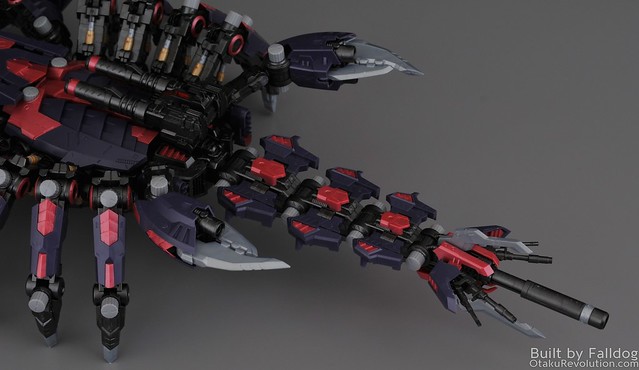 The Death Stinger is considerably smaller than one would expect. In the 'default' pose it's approximately 12-13.5 inches long, 9 inches wide, and 6 inches tall. 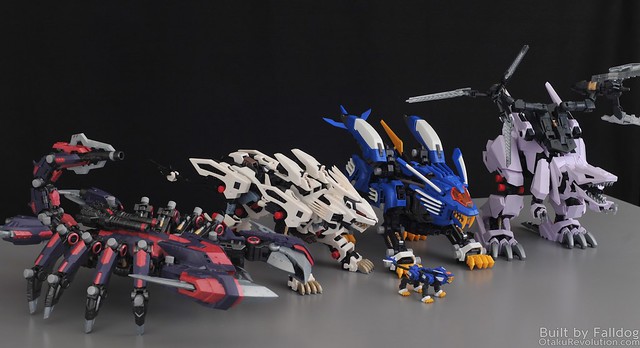 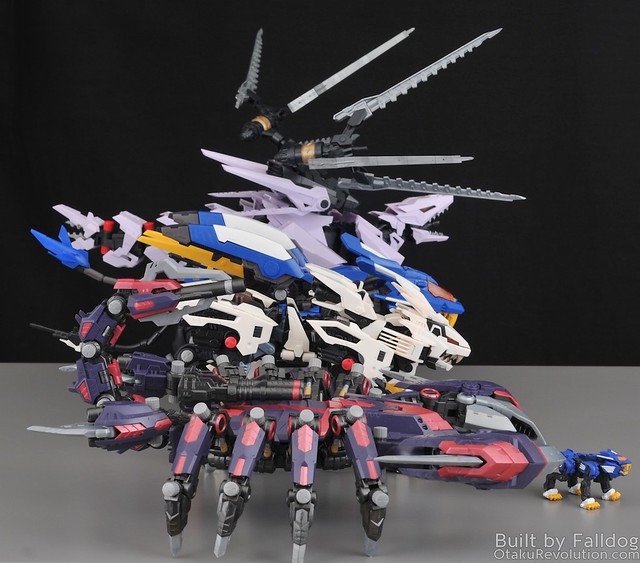 A few other things of note... for starters Koto used plastic with that metallic swirl that I generally dislike. I think I made an audible groan when I first noticed it. However, on this kit, I think it sort of works.

As with the rest of the HMM line, there are lots of details. Loads more than some of Bandai's Perfect Grade kits. If you were to stop and paint everything it would take you ages. The options for color separation on the frame and armor are limitless. Hell, even the area around the core looks amazing: 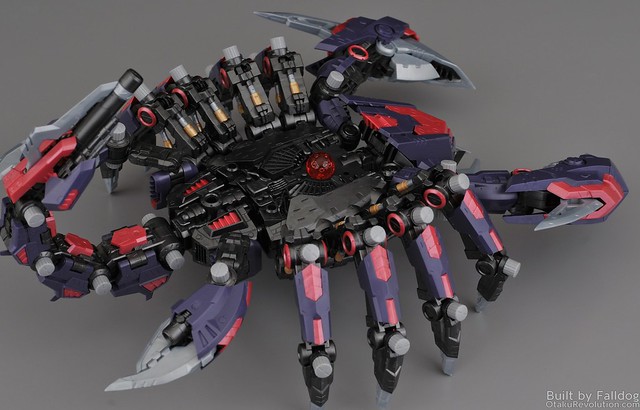 Unfortunately the pistons on the kit are not plated, but are just a bland silver and somewhat garish gold. The runner connections are in the center of each piece so I'm not sure they would've looked better even if they were plated.

There are a lot of seam lines on this kit. A lot more than I think are generally visible on the other HMM Zoids I've built. Thankfully, they're predominantly on the black frame so they're not overly obvious.

This is where things gets a bit weird.

I had three thoughts when I first found out about the upcoming release of a HMM Death Stinger:

My only exposure to a Death Stinger was in the Zoids: Chaotic Century TV series. In it, the Death Stinger was blue and red. It was also massive in comparison to most of the other Zoids, large enough to pick them up with its claws. I was fairly confused as to why they were releasing a Death Stinger in different colours and supposedly in 1/72 scale. Turns out there are two releases of the kit, the purple/pink one above and a special Hitlz version that comes in CC's blue/red. The latter is a "Limited" edition and was only available on Koto's website.

I'm not sure where the pruple/pink version comes from, but it's relatively 1/72 scale. Or rather, it at least comes with a 1/72 pilot figure that matches up with the rest of the HMM line. A 1/72 scale Death Stinger from Chaotic Century would be massive, probably as large as the HG Dendrobium (I didn't do the math). Rather than develop whole new molds, Koto just re-pressed the regular Death Stinger in blue and red, marked it as the Hiltz version, and labeled the whole thing as non-scale.

While the Hiltz version Death Stinger is 100% the same as the regular Death Stinger, there are a few extras in the box. The first is that the silver and gold runners have now been plated in chrome and gold where appropriate. This isn't a replacement for the original runners, just a whole extra copy of each of these runners, now with plating. Why they included both, I haven't a clue. For folks who want to paint but don't want to strip the coating? Just buy the general version at a considerably lower price point. Anyhow, the chrome parts look fantastic, Koto really did a sold job there. Most of the pieces are under gated so nub marks would be cut to a minimum. Again, Koto clearly planned this out ahead of time. Unfortunately some pieces will still have exposed nub marks and none of the pistons pieces have been designed to minimize marks. Why they did it so half assed confuses me further.

The Hiltz version also comes with a little figure of his Organoid (Ambient), a Hiltz figure, a seated Hiltz figure (to place in the cockpit), and Blade Liger scaled to the Chaotic Century Death Stinger. This allows for a cool pose where the Death Stinger is picking up an crushing the poor Liger. Easily the coolest extra piece, but hardly enough to justify the cost. 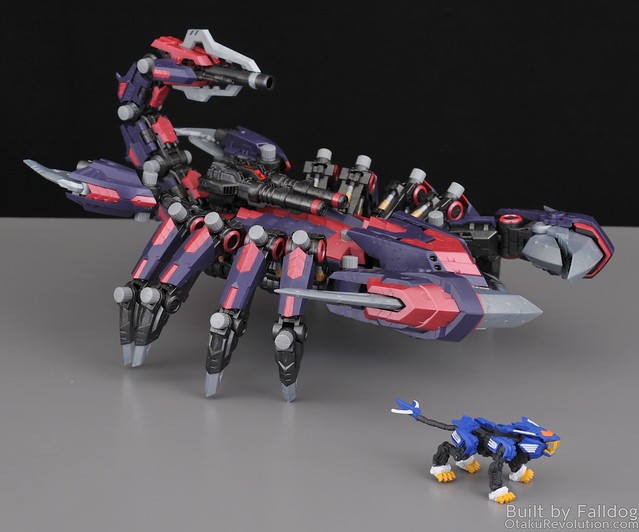 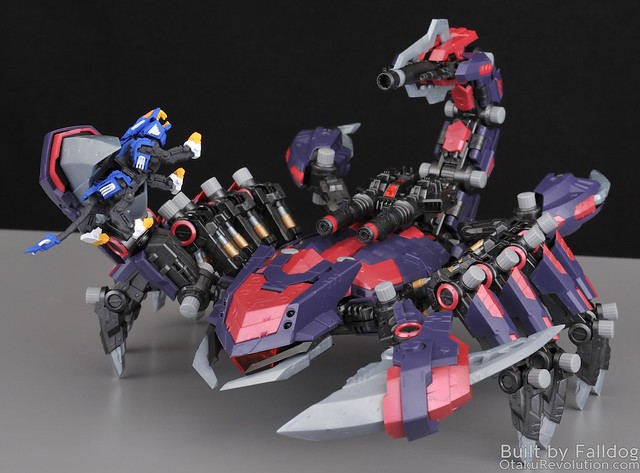 The mini-Liger does come with blades, but they and the tail did not stay on at all. They'll probably have to be glued.

Would I recommend it?

Well, I certainly wouldn't dissuade anyone from picking one up. If you're into Zoids, or like the idea of building one, start with the HMM Berserk Fury. It's by far the best HMM kit I built and the coolest design. The HMM Liger Zero isn't as good as a kit, but has a fantastic design. The Death Stinger, at the end of the day, is a fantastically designed kit, but far from the coolest Zoids design. Unless you really like scorpions.