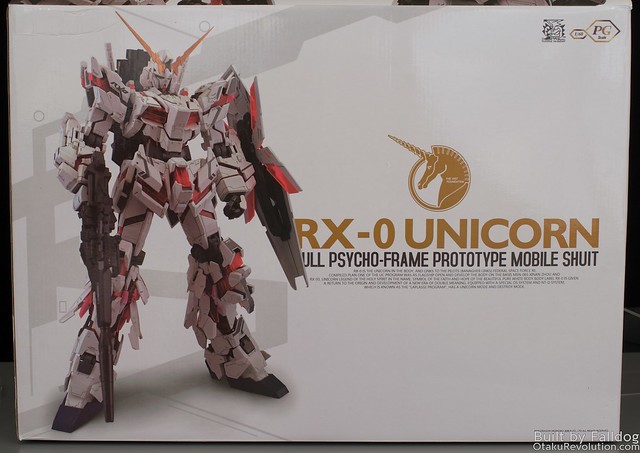 The next in another long line of "screw it, I'll build another Unicorn" is Dragon Momoko's 1/60 Perfect Grade Unicorn Gundam. As a huge proponent of buying official Bandai kits wherever possible, you're probably wondering why I'd bother with a standard bootleg Unicorn. Dragon Momoko's Unicorn kit unlike the other Chinese copies out there in that comes redesigned with a plethora of added detail to the outer frame. 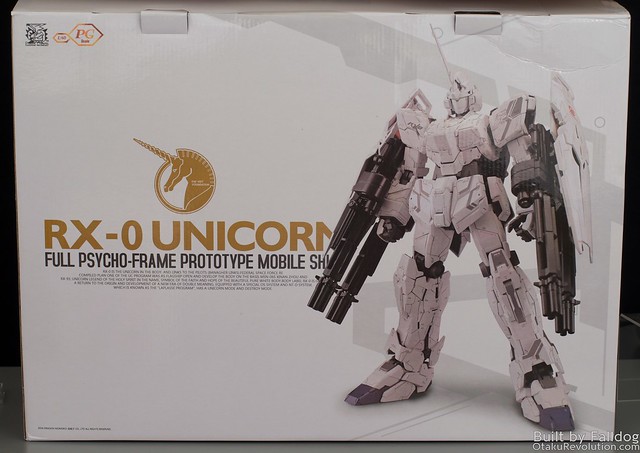 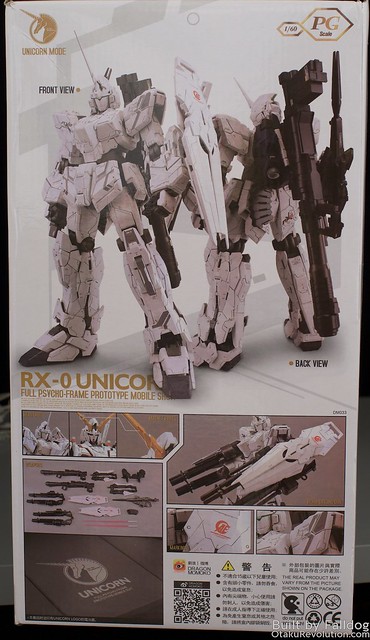 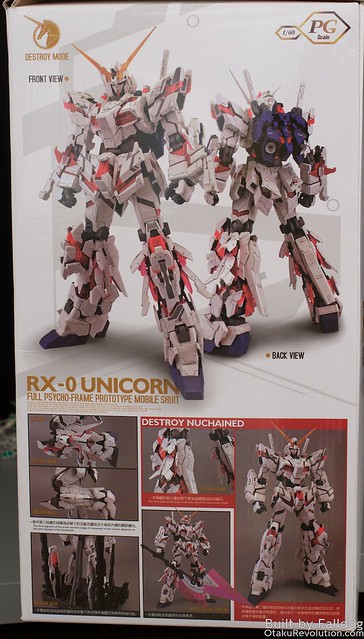 
Nearly every white armor piece has a whole bunch of new detail lines that aren't on the original Bandai release. It's hard to quantify the changes but they're simply everywhere. Pre-existing panel lines and details have been widened or otherwise improved. There are raised bits, lowered bits, elongated bits, and on and on. It's simply fantastic to behold. Proportion wise I'm pretty sure everything is the same aside from a new, more pronounced, cockpit cover. The frame of the kit is largely the same, I only noticed a few extra details on some of the exposed ankle bits. Nor have I see any updates to the red psycho frame. Sadly no changes to the detailing on any of the weapons, though the shields have plenty of new details. 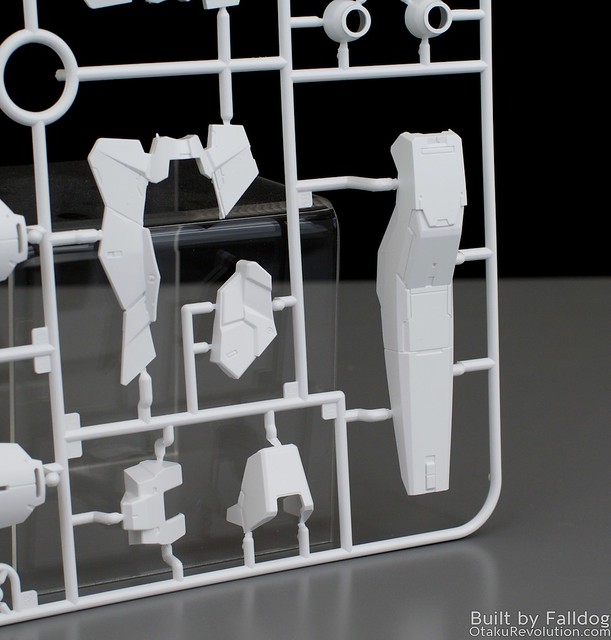 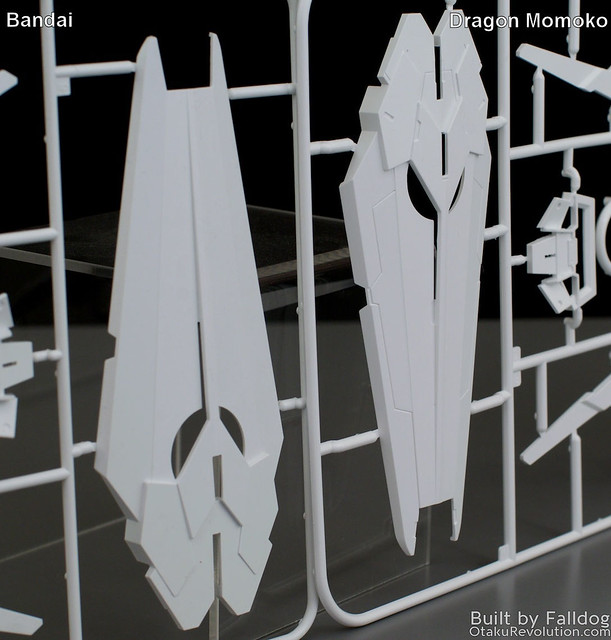 Bandai on the lefft, DM on the right

Also included with this kit are two 1/60 scale Hyper Beam Javelins complete with gigantic beam weapon effect pieces. What's interesting is that, to help hold such a giant weapon, DM saw fit to include fixed position hands in addition to the multi-cast flexible PG hands. It's really nice to have the option and wish Bandai would do the same for their MG kits that ship with the new hands. 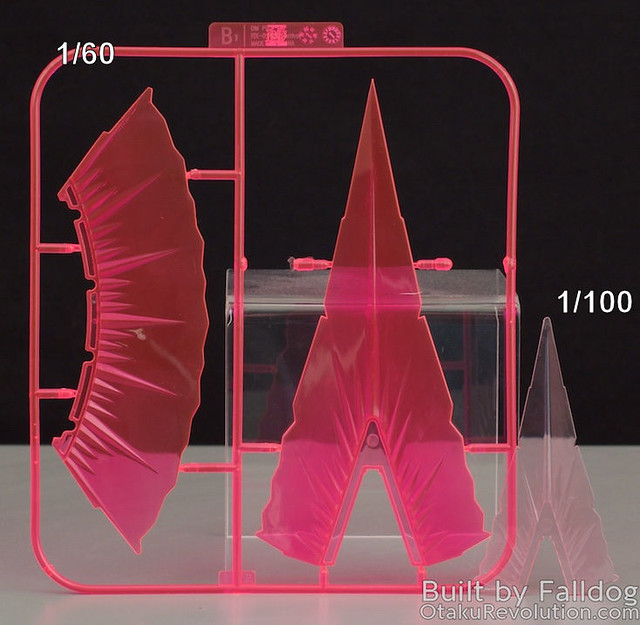 Unique to the kit is a backpack contraption called the "Robot Arm Display" which features four poseable arms from which you can mount the bazookas and shields. It's like a cross between the FA backpack and the Phenex backpack. I'm curious to see how well it holds up as it only appears to connect to the backpack through a single hard point connection, unlike the aforementioned option sets.

From the plastic prospective everything looks to be pretty in good condition. All of the detail lines look like they were well molded and the molds themselves polished properly. The inner facing bits of the armor haven't been polished to Bandai's exacting specifications which, in theory, shouldn't even matter. What's odd is that all of the press punch points (not sure the technical term, for the circular indentations in the plastic caused but the mold's runner release mechanism) appear to have been buffed manually after the molding process. That or molds were buffed in such a way that the buffing markings carried over to the plastic. I don't see much in the way of flashing issues, though some of the edges can use a bit of work. The true test will be how it all fits together.

The plastic looks to be pretty good, though the colour of the psycho frame is a bit off. It's a bit clearer than the plastic Bandai used. It still fluoresces in UV light but that added clarity takes away some of the impact.

It's also worth noting that a good deal of the runners, even for pieces on the frame that haven't changed, aren't 1:1 for the original Bandai runners. The pieces, while the same, have been shuffled together and runners expanded. 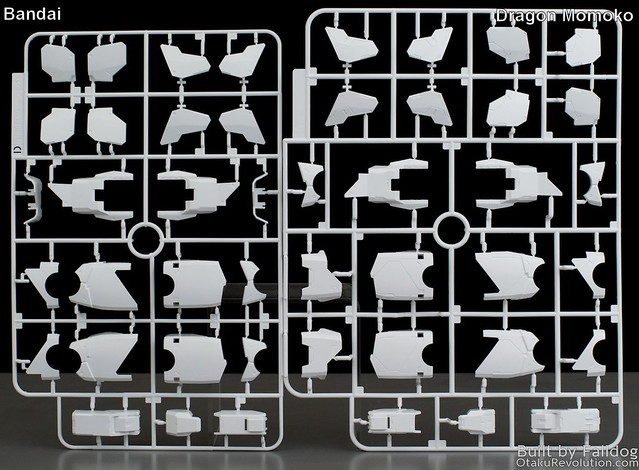 Bandai on the left, DM on the right

The kit also comes with a full LED light set to save you the trouble of buying one separately. The first thing I noticed is that it came all cabled up, not individually bagged and lettered to match the guide like the official Bandai release, something that might be a pain in the ass for first time PG Unicorn builders. The wires seem a bit thinner, or at least not as stiff, as the official set. I'm fairly worried about their durability and breaking a wire as I put the kit together. I also need to mention how awful they smell. I'm not sure what it is so I'm just going to call it cheap electronics smell. Yuck. 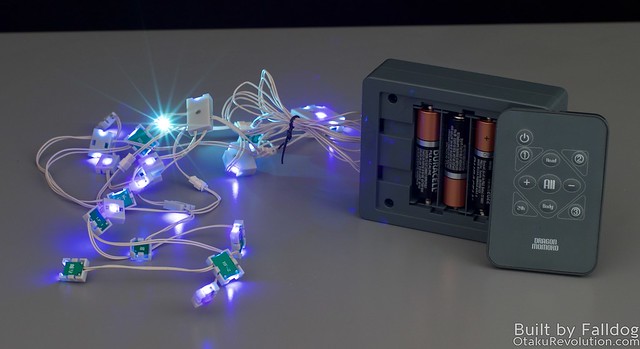 Unlike Bandai's release, the LEDs are controlled by a little remote that lets you turn the lights on/off, adjust brightness, and flash them. While I believe it's a feature found on other third party LED kits, this will be my first experience with the setup and am unsure of the benefit. The remote needs a 2032 battery, not included (nor do I see the required battery type documented anywhere), and the main battery pack itself takes 3 AA batteries (one less than Bandai's which takes 4 AA batteries). The LEDs are just a tad dimmer than the official release but not something worth worrying about.

One of my favorite things about this kit is the VIST Foundation emblem comes pre-stamped on the stand. Unfortunately the stand itself didn't get any improvements. The upper surface is nicely textured, sort of a matte finish, though the sides are smoothed plastic. 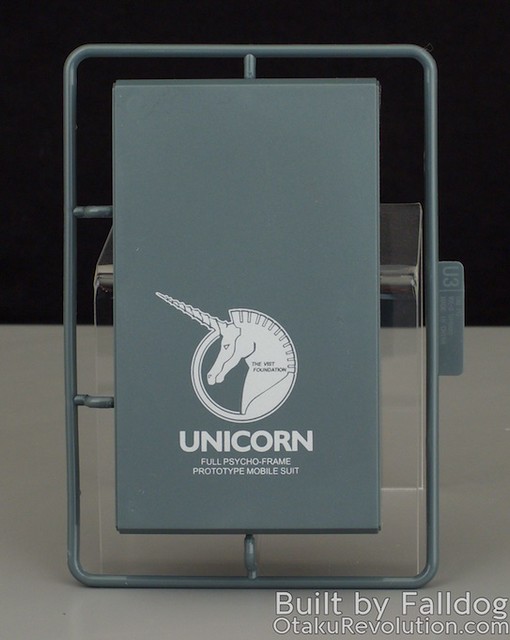 I'm really looking forward to building this kit, though I'm still debating what level of effort and detail I want to put in. With all of the details available there are a lot of paths to go down with this kit. The plan right now is to keep it relatively simple; spice up the psycho frame, give the frame itself a dark gray coat, paint the white bits an off white, and detail detail detail. While I'm super excited to dig in, I have to temper my expectations a bit. After my last tryst with third party Unicorns I should full expect none of this kit to fit properly. At least I won't be trying to mix in official Bandai products this time around.