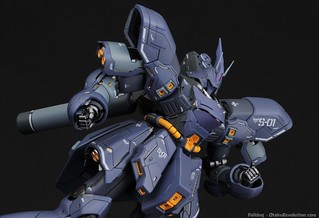 I'm please to present my latest build, the MG Sazabi ver. Ka. It hasn't been without issue, I've definitely run into some complications here and there which I'll get into later. For the most part things came together pretty well. There are a few things I wish I could go back and redo (would likely require buying another kit) to get 100% right. Oh well, what good is a build there aren't lessons learned? The build took around two months from start to finish and boy did time fly. Lots of painting, lots of top coating, lots and lots of pieces. For the most part it was smooth sailing thanks to a methodical paint process.

Before I get to the gallery I'm going to take some time to talk about the build, the paint, and some of the issues I ran into. If you don't care about all that feel free to skim toward the bottom.

If you're interested in my thoughts on the kit as a whole check out my review for Gundam Guy.

Many of my projects stem from sort sort of inspiration and spiral out of control from there. When trying to come up with a colour scheme for my Sazabi I hit a lot of road blocks. Most of the schemes that I wanted to do I either did recently or have been planning for other kits. Part of the fun of custom paint jobs is trying something new. I finally got that flash of inspiration during an episode of Gundam Build Fighters where this appears on screen... Yes, that's right, it's not a Titans colour scheme! It's really based off of a stunning shot of the Kämpfer Amazing. I did think of doing something straight Titans themed, but I recently did that with my MG Banshee and didn't want to ride my own coattails.

For this kit I knew I would have to mix up some custom colours. I didn't think I could easily get the varying shades of metallic blue I wanted so I decided to settle with a silver flake mix. Working from a core colour I added various other shades to produce lighter and darker colours for contrast. I knew that I wanted to simplify the look of the Sazabi and get away from some of the more complicated schemes that are available thanks to the many different parts.

This is the second time I mixed in silver paint to add a bit of metallic flake to the kit, the first being my MG Sinanju Stein. It will probably be the last. While adding the right silver can help achieve the effect there's a big downfall that comes from having flakes in your paint. After painting parts are very susceptible to slight scratches. If two parts rubbed against each other it would create a mark that I would have to repaint. Normally slight touching doesn't do much other than tarnish the surface of a piece, but when there's silver flakes inside it somehow exposes (maybe aligns them in the same direction) them a lot more. The result is a mark that's lighter than the rest of the piece and can only be fixed with another coat of paint.

There are a total of five custom mixes, all Tamiya, that make up the paint scheme plus several straight colours for the details. They are...

The first four of those from left to right. You can see an example of one of those scratches on the second sample. 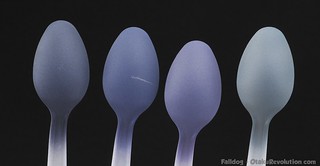 I tested them all out beforehand and knew that I was riding the line of distinguishably rather closely (see pic above). Keeping with that theme I tried to make the inner armor pieces, previously silver, a lighter shade than the rest of the frame. I could've gone with Tamiya's Light Gunmetal (and maybe I should, like the great Lupes is) but instead tried to go with a single coat of Gunmetal over the silver pieces. At first I thought it looked great, but after I started putting the kit together realized that they were way to close. I don't mind though as it was something I hadn't seen done before on this kit and wasn't planning on displaying it in Angry Cat Mode. It also gave the added benefit to aligning the various mixes between regular and silver frame pieces showing through the armor.

All the small silver, gold, and purple details are all hand painted. A lot of them got covered up by the armor but make a huge impact when you can see them.

Since the Sazabi is such a large kit piece wise I had to take it on a couple colours at a time. I took one or two, painted them, gave them a clear top coat to protect the paint and prepare for decals, added decals, and covered it with a final top coat. Once that was done I set the pieces aside and moved onto a different colour. The very last was all the yellow bits which, which by that time, just felt like a chore.

Decals went on really well and I only had a few issues here and there (don't look too closely!). Bandai's decals are definitely of a fine quality but I think they're a bit thicker than others so you need to pay extra attention to get them to look as seamless as possible. They're also just as fragile and I unfortunately broke a few here and there.

While I used Future Floor Polish for the intermediate gloss coat I finished everything off in either Model Master's Acryl Flat (for the greys and yellows) or Semi-Gloss (for the blues). For the most part things turned out well but the Semi-Gloss hates me and I now hate it back. Sure, it sprays really good, but it shows off too many issues. I even got a few random splotches that I haven't a clue on what caused them. One, I'm 100% positive, wasn't there prior to putting the kit together. Another, also one I don't recall being there after top coating, you can sort of scratch at and it'll appear to come off, but just return a few minutes later. A few others here and there I'm pretty sure are just stress marks due in part to the construction of the kit.

To top things off I also scratched the paint a few times while putting the whole thing together. The Sazabi has a lot of moving parts and tolerances are tight. There are a few spots where you'll see a quick touch up that'll stand out due to the lack of subsequent top coat.

I didn't take a lot of photos post-completion in part because I didn't want to inadvertently cause more damage to her, and like most Katoki kits, the Sazabi has an unfortunate amount of fragility to it. The legs kept spreading apart, the one arm kept popping off, and there are quite a few seams that never really fit together properly. That, combined with approaching the process in a crummy mood, didn't result in a fun photo session. Figured it was best to take it easy and not fight fate.

Ah, the part you were waiting for... or skipped ahead to.

And that, for now, is all she wrote. Or built. Whatever.

I tried to answer any potential questions about the build but if there's something you'd like to know feel free to ask below.