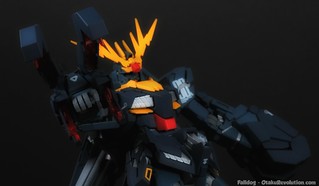 Ah, here it is. My latest Gundam Unicorn creation, a Banshee more specifically, themed in the lovable Titan's colour scheme. Blue and gold has always been one of my favorite schemes, well before I saw Zeta Gundam ages ago. To see this kit come together and look pretty damn amazing, with the yellow details here and there, is a long time coming. The project was envisioned months ago before I convinced PatrickGrade (of GundamGuy fame) to part with his Banshee.

His contribution, long with my FA Unicorn/Banshee frame swap, allowed for the kit to be built with two claws. I like how they look closed, almost like a giant fist, so I decided to display this kit with one closed and the other open. I'm not a fan of the built in beam cannons so those aren't like to make it onto any upcoming Unicorn projects of my own. They could make for a good mod/kitbash somewhere down the line. All in all, I'm pretty pleased with how this project turned out.

But that's not to say that this project hasn't come without issues. While it may look great I can't say this isn't one of my best projects from a technical prospective. If you've read my previous WIP update you may remember where I had issues with my top coat. Unfortunately this has resulted in a silvering for many of the decals that shows up under certain light. You can see it in some of the photos but I'd prefer if you didn't look too closely. ;)

In addition I did have some breakage on the crown/brow. For those looking to build a Banshee be careful with the piece. And, should you break it like I did, it may be best to glue it back together when attaching it to the head. After breaking it the first time I glued it back into place only to have it break a second time when trying to put the head together. I touched it up as best I could but the lines are pretty sloppy.

For the most part the scheme is pretty simple. A lighter gray for the frame, with some metallics here and there for contrast, and somewhat traditional blues for the rest. Technically Titan's colours used a navy blue and a really, really dark blue (almost black on a lot of kits). Personally I prefer multiple blues so that's the one real exception to the scheme. There aren't a lot of small details here and there, in comparison to my Nu inspired Unicorn, as I decided to keep things relatively simplistic. Thanks to /r/gunpla for helping with that decision.

For those interested the kit was painted almost entirely with Tamiya sprays or acrylics. The dark blue is AS-8 Navy Blue while the light is XF-18 Medium Blue. The borderline black used on for the backpack and beam sabers is really a dark blue, XF-17 Sea Blue. The yellow is my favorite TS-34 Camel Yellow and the red TS-18 Metallic Red. TS-76 Mica Silver was used for the frame.Though you can't see it, the thrusters are coated internally with TS-30 Silver Leaf and TS-74 Clear Red, keeping with the Titan's theme. More of that clear red was used for the claws. The outside of the thrusters and several accent points along the frame are done in TS-42 Light Gun Metal.

The rest of the frame was coated in my go-to Krylon gray primer. In total all but five pieces on the entire kit were not painted.

And last but not least, the photos. Enjoy! 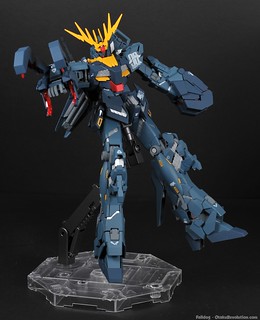 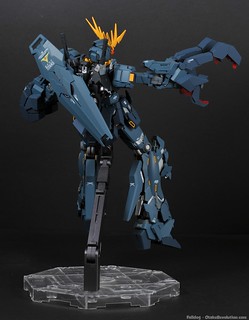 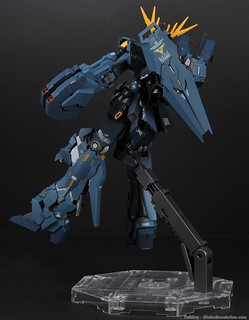 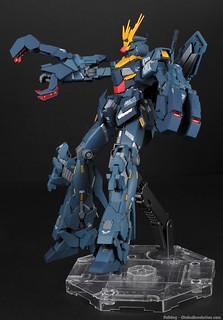 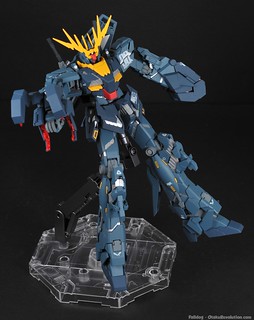 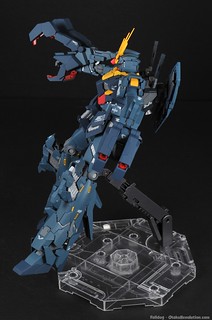 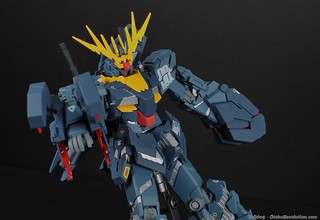 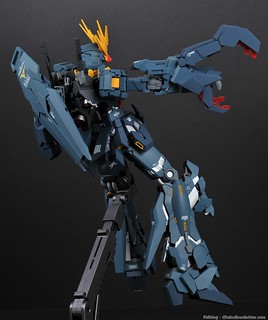 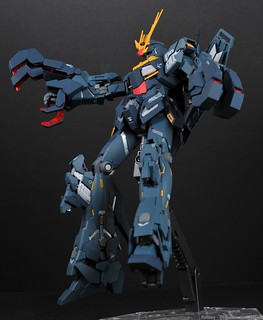