After some work I've completed the wing structure for my PG Strike Freedom, and painted 'em. Instead of a blueish-black they're now a flat black (with a bit of temp gloss coat to protect the paint for the time being). The gold bits have all been repainted and they look fantastic. For comparison, a straight build shot from Dalong... 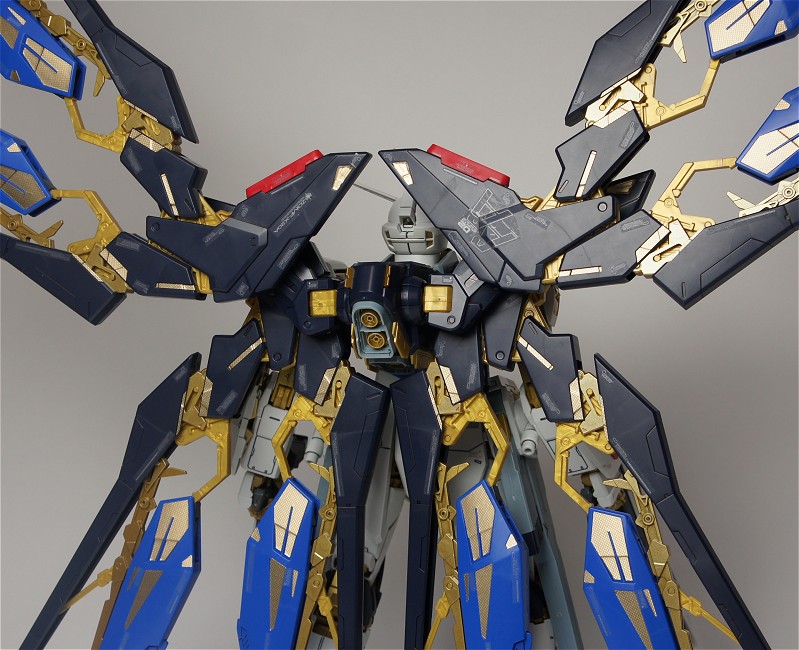 The new gold looks a lot better. I'm starting to realize the extent of work that's going to go into this kit. Not just because it's huge (I giggled like girl when I saw how fucking massive this kit is after attaching the wings for the first time) but because the complex mix of dull and gloss pieces. I'd like all of the gold pieces to get a gloss coat, to protect them more than make them shine. The rest of the kit though I'd like to go in a dull coat. However, since the paint is flat, I'll need to do a gloss coat to prevent decal silvering. In order to finish this kit I'll need to disassemble, paint, reassemble, gloss coat, apply decals, disassemble a second time, selectively apply a dull coat, and then assemble one last time. I'm worried about pulling the wings apart. I've already had one of the pegs break and will have to glue it eventually. For the most part the wings don't sag, but then again I haven't put the funnels on. Though, in the set that's pointed down, the upper half doesn't stay fully extended, and sags down toward the bottom a bit. If it stayed as is with the funnels it would just be a tad noticeable but I'm worried what the extra weight will do. Still finalizing the paint theme, but for the most part... White -> Black Red -> Gold Blue -> Red Gray -> Metallic Gray I need to find a new red. It might not match the red I did the funnels in, but fuck it. Of the two colors I tried thus far neither sprayed remotely well.
gundam seed
Perfect Grade
Strike Freedom
Gunpla