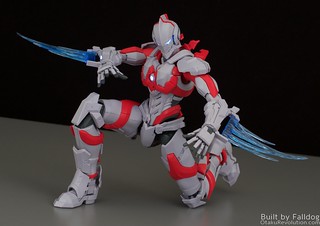 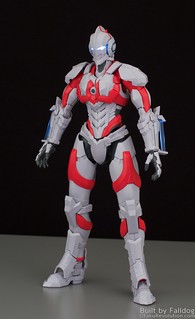 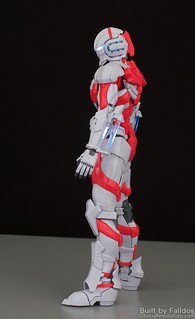 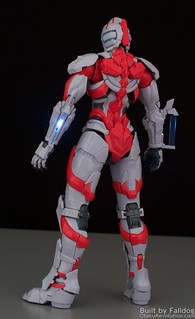 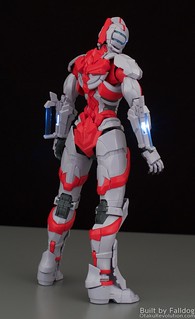 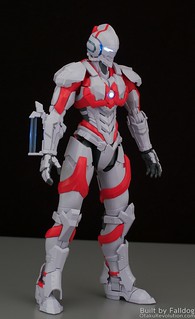 Made from around 20 runners worth of pieces the kit went together pretty easily. Most everything is tight enough, to the point that getting some pieces off to break down the kit for paint is going to be a risky process. I'm not sure how easily the special coated versions will go together. A few times I had to pull out pliers to squeeze parts into place. Near everything is engineered to prevent splitting of pieces after they're together which is great. The biggest issue are the seam lines on the kit. They're all over the place on the limbs, and when you start to pose the kit, things flex enough just to loosen and make them split every so slightly. There was some leftover flashing from the molds but nothing that I was too concerned about.

From an option perspective there's a choice of clear red or clear blue pieces for the head, as well as 4 different pairs of hands. While fingers on the hands can be a bit loose and pop off, they are a great example of the detail that went into parts of this kit. They're way over engineered in different ways... Some times most of the fingers are molded as one piece, some times each is individual. On top of that each finger has tends to have individual armor pieces. 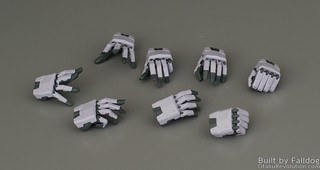 The biggest gimmicks are the LED lights in the head, torso, and forearms. For better or worse each lit area is a separate LED and battery pack. There's no way to turn them on and off from outside the kit so you have to pop off pieces on the arm, the front torso, and the forehead to get at the switch within. Surprisingly, it's not nearly as painful as it sounds. Other than the fact that the arm and head sets are not secured in place, meaning that when you pull off the armor to get to them the LED set might pop out and fall on the floor, removing the outer armor pieces is straightforward. It's much more reasonable than having a whole wired kit or having visible switches. Over all the LEDs are not over the top, but they add just enough and really shine when you add some of the weapon effect pieces. More on those later. 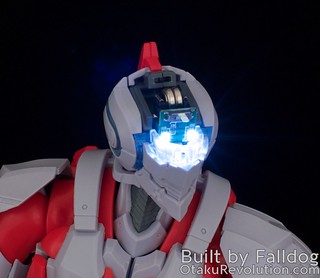 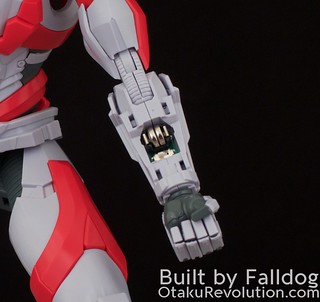 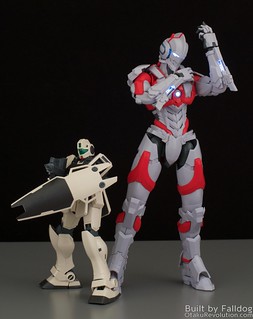 The one thing you want most from a kit like this is the ability to strike a pose. That is certainly not a problem here. There's good flexibility all around and all the joints are decently strong enough for everything out of the box. The ankle joints are nice and tight, but the front part of the foot could use a bit of strengthening. No issues with the waist, torso, head, or arms. Though range of motion across the chest is a bit limited and the kit could've benefited by a rotating elbow joint. 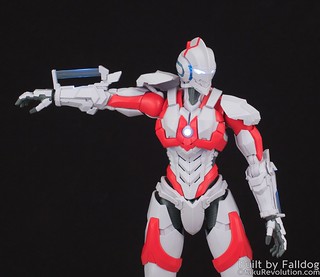 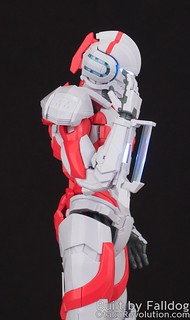 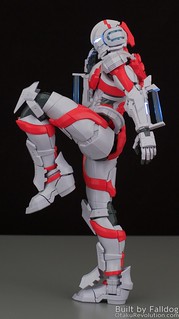 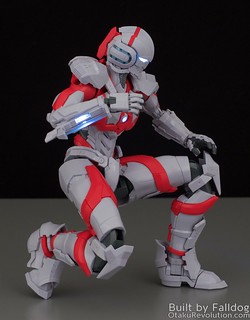 To help with range of movement, the shoulder armor and rear ankle armor are on ball-and-stick joints to help separate them out. The waist armor (that goes from the back to the top of the codpiece) notches in place on the front, not a hard connection. That means for poses where the leg comes up high the piece and move out of place to not impact the range of motion. You could probably get all kinds of flying and more dynamic action poses with a figure stand to lift the kit up.

There are some flappy bits that open up on the rear legs and top of the back. They're not exactly the most interesting thruster bits to swoon over. 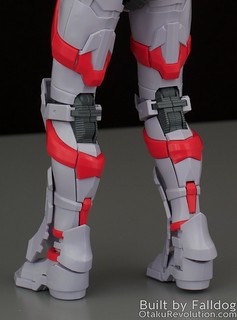 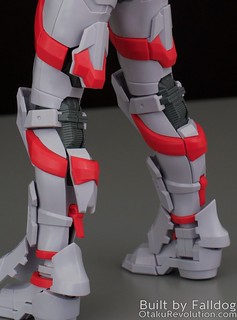 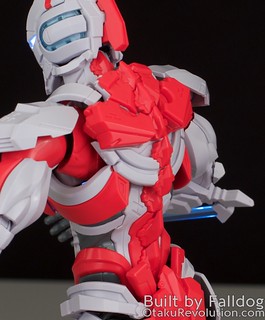 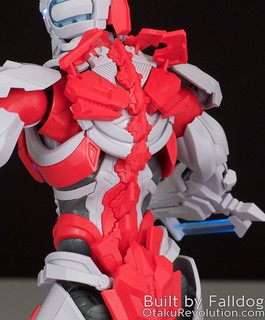 On the arm there's a bit that opens up to reveal the LED light, but on my kit the things that move up and down are so tight that I didn't want to mess with them at all. There are also flaps on the left and right that open outward a bit. 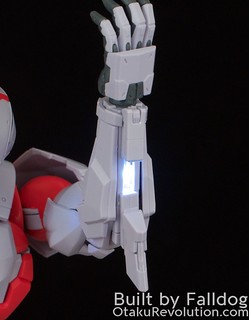 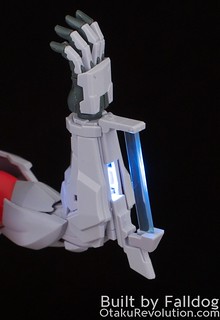 Besides punching bad guys into submission, Ultraman also has laser blade things on his arms. You can see them in most of the photos so, simple beam pieces that span the forearm. Back lit from the LED they look pretty cool, but the LED really lines shine you put the big beam effect piece in. It has a bit that extends directly into the LED slot, which not only adds stability, but helps carry and direct the light out. It's a great effect, specially when the lights are turned down. 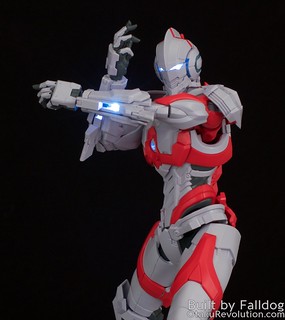 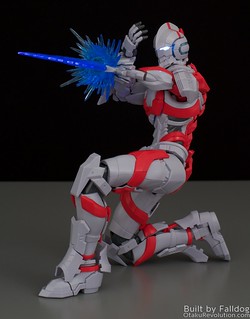 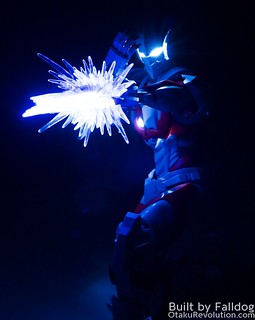 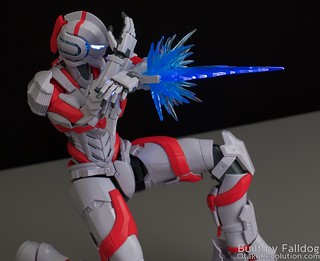 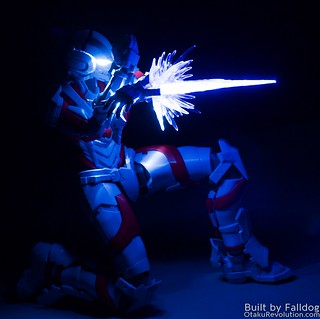 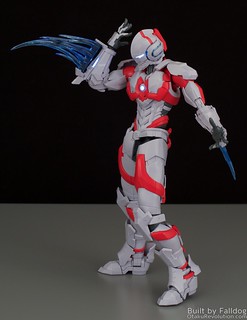 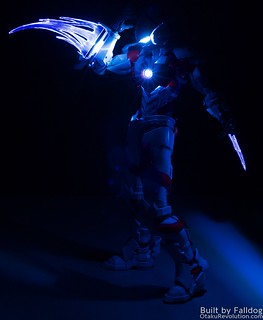 Whomever made and designed this kit did a solid job. Amazing if this is the first think they've made. What little fitment issues I have, while standing out compared to the kind of quality you get from Bandai, are the smallest of complaints stacked against the multitude of third party shops making kits these days. The designers did a really good job taking the new Ultraman design and adjusting for a full mech model (the in-manga design has more curves suit like qualities you see from the original Ultraman). There's plenty of detail, smart engineering, and design appropriate gimmicks. I'd easily say this is a must buy for fans of the latest Ultraman series who enjoy putting kits together.