Legend of the Galactic Heroes: Die Neue These Episode 05 Review 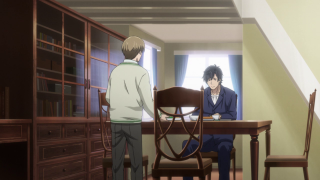 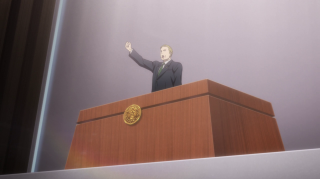 Synopsis:  On the Free Planet Alliance's capital planet of Heinessen, Yang Wen-li attends a public memorial for the deaths in the Battle of Astarte. There, Secretary of Defense Job Trunicht gives a grandiose speech on the sacrifices for the homeland, but is interrupted and confronted by Jessica Edwards, who questions if he's living what he speaks to. Sensing tension, Yang flees the service with her, where he is pursued, and narrowly avoids a car wreck. After escorting Edwards to the spaceport, the beleaguered officer returns home to his ward, Julian, but is followed there by reactionaries called the Patriotic Knight Corps who condemn him for his behavior. He repels the group, and is soon called in by his CO to discuss a mission he must undergo: to take a newly formed fleet and capture the Galactic Empire's Iserlohn space fortress. Yang reluctantly accepts the assignment. 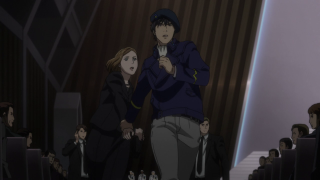 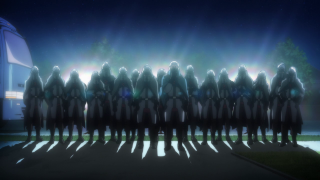 Aside from the new (and a tad unnecessary) car chase scene, this episode was pretty much a word-for-word adaptation of Chapter Four of the first Legend of the Galactic Heroes novel by Yoshiki Tanaka. Not only did they manage to get the whole damn thing in, but even add that weird action scene. I mean, they even included the bit where Yang loses the only genuine antique his father left him. Maybe he should have sold that long ago to pay for Julian's education. Now he has to rely on his somewhat sparse, and yet increasing, salary.

Come to think of it, there was one thing they left out that, honestly, they really should have kept in, which was the old woman with her grandson at the spaceport. The old woman's grandson was meek and she was hoping with Yang's encouragement he would become brave enough to be a soldier. However, Yang claimed that by the time the child grew up, an age of peace would arrive, so him becoming a soldier would be unnecessary. Wishful thinking for somebody who can be so skeptical that he's downright cynical. I think it's a great bit that humanizes Yang and shows the obsession with the war even the civilians possess.

Speaking of that obsession, we're introduced to the slimy, jingoistic, and ultimately self-serving Secretary of Defense for the FPA, Job Trunicht. He not-so-subtly represents the sort of politician that glorifies the sacrifices of lives for causes supposedly more important than those lives while he remains completely sheltered from their consequences, while dismissing any kind of rational compromise. It's amazing, however, that this somewhat of a caricature of overzealous warmongers is depressingly common in real life. As the original OVA opined in an opening sequence, "Zu jeder zeit, an jedem ort, bleibt das tun der menschen das gleiche" ("In every age, in every place, the deeds of men remain the same").

An important character introduced in this episode, aside from Trunicht, is Yang's kind-of-apprentice, Julian Mintz. As Calsenes described in the previous episode, the war orphans are recycled into the system, the military giving them board and education in return for military service. Yang is determined to sway Julian from becoming a soldier, or at least rushing headlong into it, but Julian seems just as willful. In the meantime, he basically runs the household and keeps things tidy and livable for the slovenly, irresponsible Yang. Throughout the novels, Julian develops into a more complicated character, but we won't see much of that in this series if it only covers the first book.

So it looks like at the very least the next couple of episodes will cover the attack on Iserlohn, which means spending even more time with Yang. We'll see the Rozen Ritters, revisit Paul von Oberstein, and hopefully finally get a glimpse at Phezzan and Adrian Rubinsky. Oooh, and Frederica Greenhill grown up! Good stuff.

You'd almost think this show was mostly about Yang. We haven't seen Reinhard in a while. I kind of miss that golden haired brat. 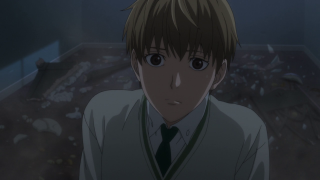 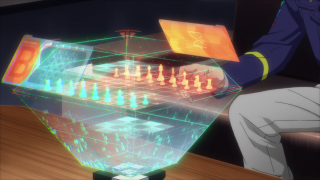