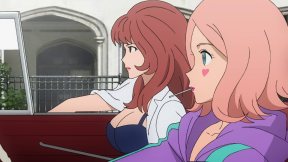 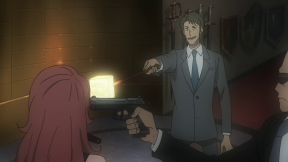 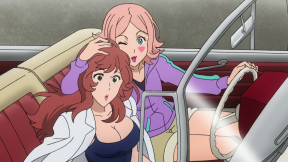 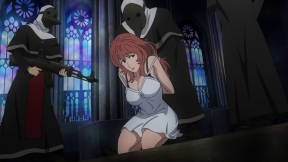 Kind of a basic bitch episode.

One of the Lupin gang runs into an old friend/rival/lover/mix of those things, which makes them remember an incident in their past with said person. The figure from their past wants to team up to do "one last job" or something of the sort (could be one final showdown), things get complicated, not everything is as it seems, and ultimately either the figure is killed by the Lupin gang member or disappears with the treasure, either because they outsmarted said member or were allowed to by said member.

That sounds like any number of TV episodes or specials in the Lupin franchise, doesn't it? This episode, featuring Fujiko Mine's old never-seen-before old partner Amelia is about the same, only with an unusually happier ending than most of the type. But even that was a little predictable, as a lot of episodes end with Lupin or one of his allies appearing to have been fooled, but then it turns out they were in on it the whole time. This is just a slight derivation of two types of episodes.

Who saw Grayson being the cult leader a million miles away? As soon as the flashback ended with the guy getting the brand to the face and nobody mentioning what happened to him afterwards, it was clear as soon as the cult leader made his first appearance - no, probably even before that- that he was the one behind it. How new to Lupin III media did the writer think i am? You see this kind of shit all throughout Part II and III. Obviously the new job was going to tie in with the old job, and who else would the cult leader be? It always has to be a character you've already met before, and unless it was Amelia herself, it was going to be Grayson. Duh.

The episode is kind of a waste of the character of Amelia. I like her. Besides giving us a hint at a possibly bisexual Fujiko's close companionship with another woman, Amelia had this kind of dumb charm to her, sort of a seemingly less keyed-in version of our favorite buxom burglar. We'll probably never see this character again, but I wish we would. 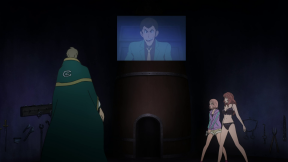 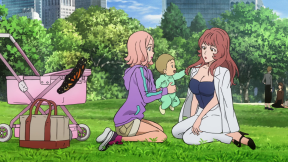