Today while romping around the Smithsonian National Air and Space Museum's Steven F. Udvar-Hazy Center a friend of mine noticed someone walking around taking photographs of the various aircraft exhibited. This person, looked just like a certain Michael Bay. Bay, the *famous* producer/director of such films as Transformers, Pearl Harbor, and Armageddon. He is pictured above on the set of the upcoming Alfred Hitchcock remake, The Birds, commanding them to be awesome. The man we suspect to have been Michael Bay was seen walking around the center at a very brisk pace. Bay, along with six posse members (and possibly a museum director/tour guide) snapped photos and took notes of various aircraft. Never once did he or any of his group stop to actually admire the planes or read any of the informational tidbits. Could he be planning for Transformers 2? My apologies for all the horrible shots. It was very dark in the museum and all I had with was a wide angle lens. I didn't feel like a dick trying to get a real up-front shot. Instead I was more of a subversive dick and snapped shots secretly from afar. Check out shots below and make your own decision on whether it was him or not. 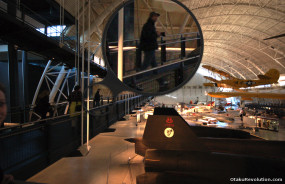 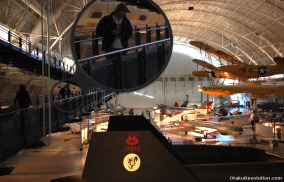 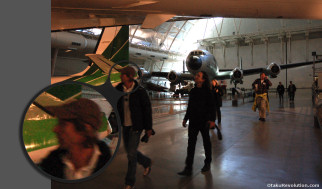 If anyone is actually interested, I plan on posting a review (along with much better images) of the Udvar-Hazy Center. I'll be sure to update this story to a link if anyone is interested.
Michael Bay
Washington DC
Smithsonian
News