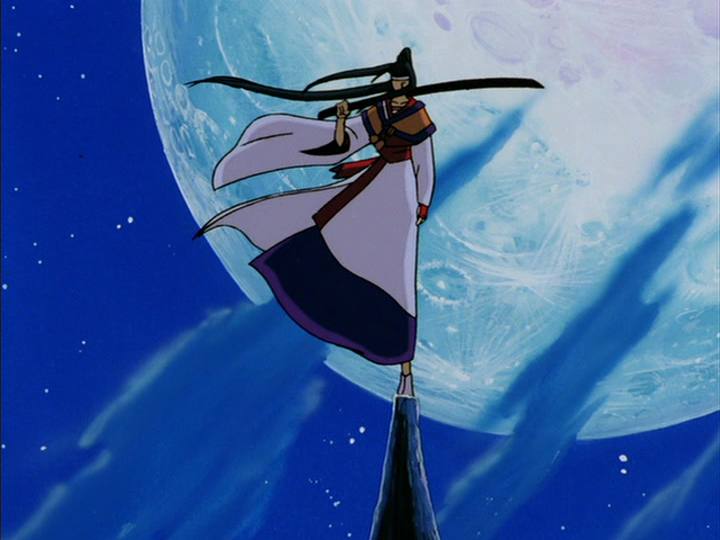 The article title may not sound much, but Gene DOES get a lot of wood this episode. Unfortunately this isn’t because he wants it; the people dishing it out are giving it to him without consent. Never give your wood without asking first.

Anyway, we’re introduced to the final member of the team showcased in the opening: Twilight Suzuka. Like Hilda, she’s a hard-ass professional who’s good at what she does. Unlike Hilda, she holds herself in a bit more dignified manner, and has a really particular code and conduct on how she does what she does best: kill. She’s also a pretty good combat foil to Gene, who’d rather be clever and evasive regarding fights with women wielding wooden swords. His duel with Suzuka, which takes the second half of the episode is overall engaging, and ends in the most Gene way possible: embarrassment and him running circles around Suzuka’s worldview when it comes to getting her to stop killing an associate of his.

…Which leads me to the OTHER giver of wood this episode: Fred Luo. I remember this fellow quite well, and it’s amusing to see him again and how he interacts with Gene. Whereas Gene could handle Suzuka well, he can’t really do the same with Fred because he’s well: … Fred just loves Gene very very much. I appreciate the expansion of Gene’s life and connections pre-Outlaw Star through Fred, and it makes me wonder how it will all unfold from here. Sadly, while I do remember seeing Fred again during the series, I cannot remember at what capacity and for what purpose. Still, it’s a good sign I like him here, so I won’t mind his reappearance in whatever episode he comes on next.

This was another solid episode free of McDougals and plot overall, just like last week’s. The show moves along at a reasonable pace in getting Gene and the crew prepped for adventure, but doesn’t feel like it is being rushed. Plus we do get to observe future crew members of his in the future, so that is also a win too. I can’t really say no to this episode, but then again I can’t really say much about it either. All I know is we’re almost ready for adventure, and I continue wondering what I’ve missed due to my dropping of it long ago.