One of my favorite things to do is pick up used kits on eBay for cheap. It's become a lot harder these days with the increasing popularity of Gunpla but there are still deals to be had if keep your eyes open. This is one of two kits I just picked up on eBay, a Perfect Grade Wing Zero Custom.

The listing for this kit made it clear that it was a parts only kit. From the photos I could tell that most of the kit was there, namely missing a piece on the upper torso and the buster rifles (which I planed use, never having done anything with them following my PG Wing build over a decade ago). Since then I've found more pieces missing, such as a rear-leg armor piece, some ankle armor, and one of the yellow detail pieces on the should armor. Still well within tolerances for the project plan.

What I didn't expect was the condition of the build in general. Simply nasty as shit. I'll let the photos do the talking for now... 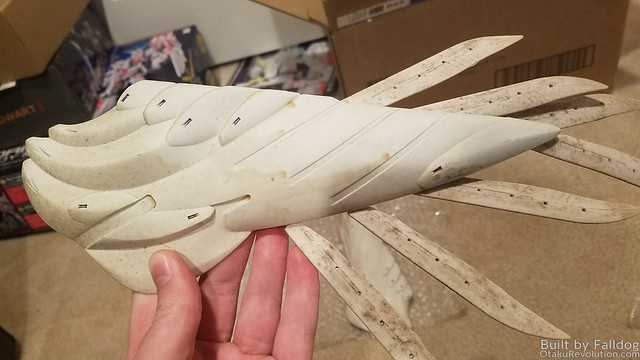 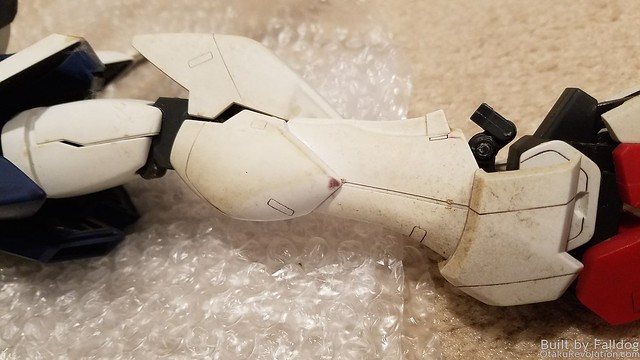 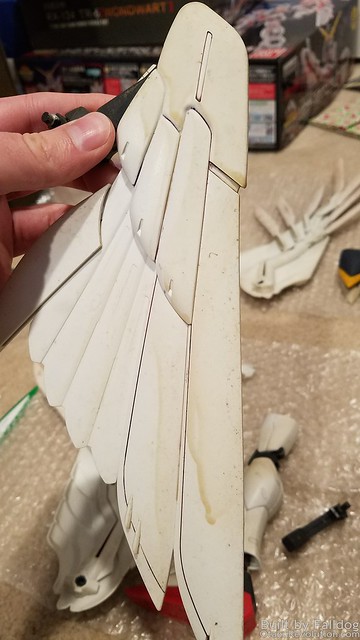 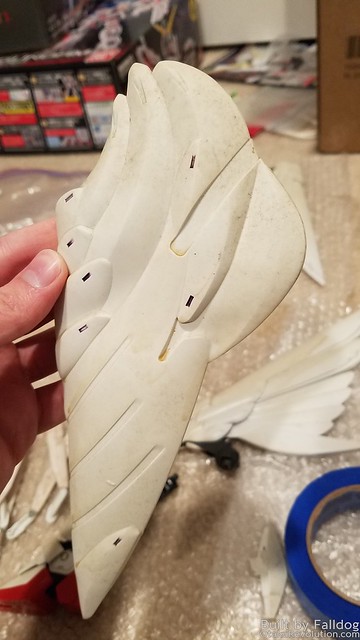 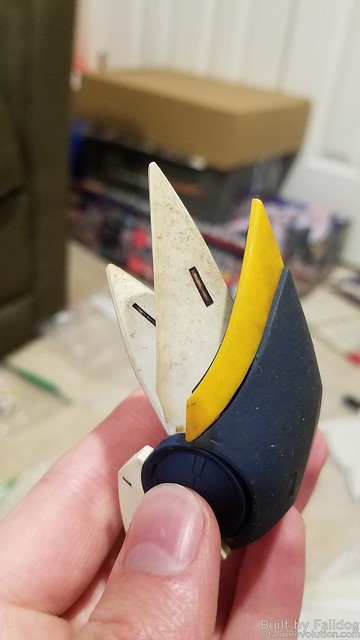 All the brown stuff? I'm not 100% sure but it's visually consistent with nicotine tar from a near by smoker. The kit doesn't smell like smoke though, and I was under the impression that nicotine tar was sticky where this is hard and dull, making me think it's a really bad top coat (the kit has been sprayed down, I'm guessing with a can based dull coat, my money's on Testors Dullcote). Even more suspect is what I can only believe to be black mold over large portions of the kit. What happened to this kit I can only speculate on. Needless to say I've been washing my hands quite a bit.

So what am I planning to do with this unsightly disaster? Well throw it into combat and drop it from space of course! I'm looking to emulate the iconic scene from the end of Endless Waltz where it's hanging in the sky laying down some buster rifle smack down. 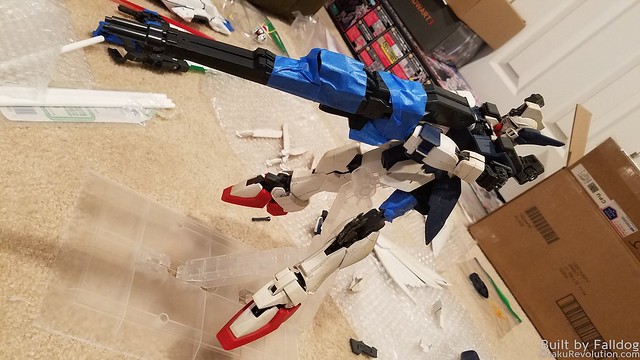 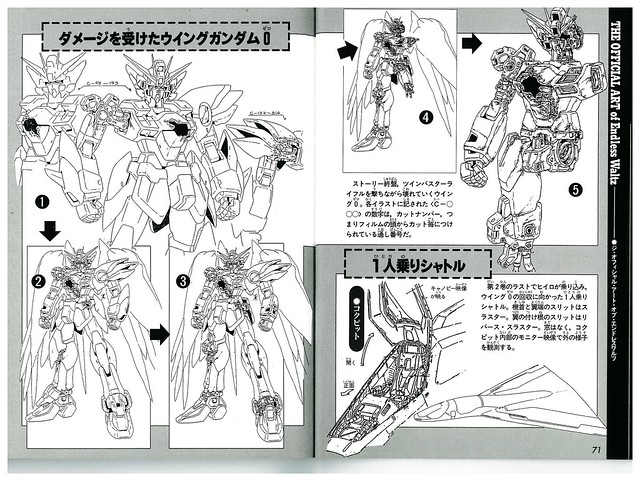 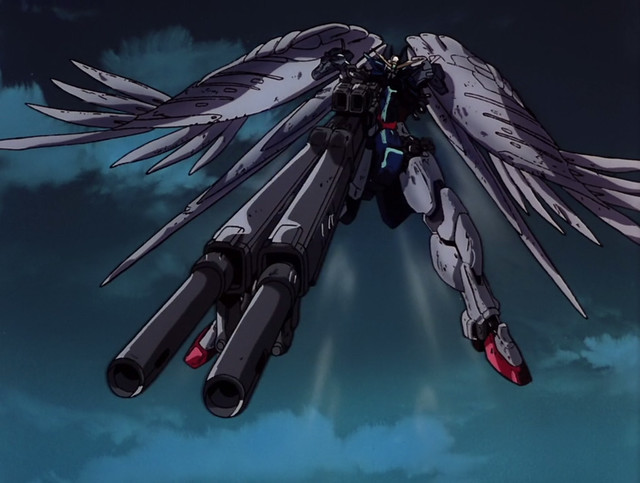 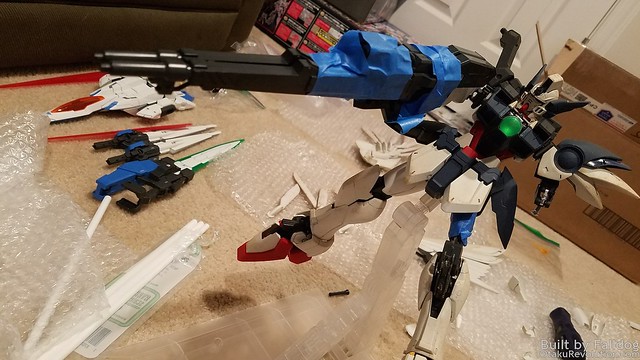 While I could do both arms holding the rifle up front, I think it would be more interesting to do a post-first shot look where it's holding both rifles with a single hand. My primary references for this build are going to be a page from the Endless Waltz Perfect Files (provided by the great OZKai) and this amazing build. I'm not planning to emulate 100%, especially since I have some missing parts to work around, but I'm expecting a much dirtier build where I wrap things up with a gunk wash.

But first I need to start by cleaning up what parts of this kit I can. Time for a Purple Power test! 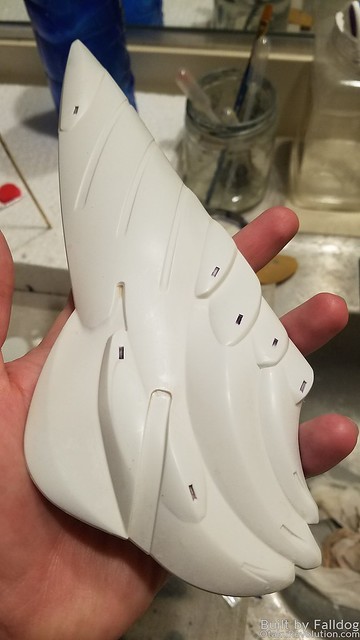 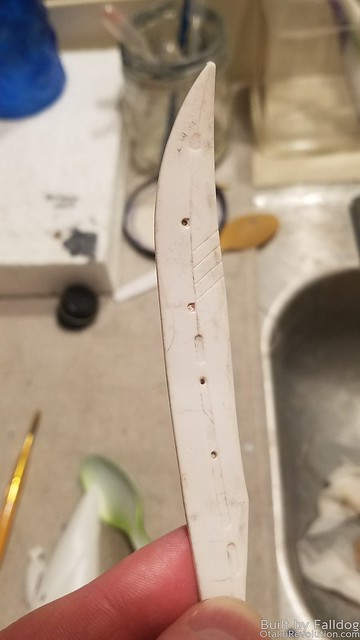 After a 24 hour soak things look better. Most of the brown shit is gone, as well as the mold, but all the panel lines are still there along with a thin layer of dull coat in most areas. I haven't done a lot of Purple Power testing but I'm guessing the panel lines are enamel and the top coat lacquer. Oh well, good enough for what I'm about to do. But first, time to disassembly and soak the rest of the kit.