Building a MG Unicorn without Instructions

I've got quite a few Master Grade Unicorn Gundams in my collection. By last count I'm at 12 including the Banshee variants. When I picked up the last three for a bit of a project I was challenged on Reddit to build one without the manual. It wasn't the first time someone threw that task out there so I thought I'd give it a go.

Preparation was easy, take all the of the runners with applicable parts and cut & trim all the pieces. I didn't do any of the weapons because I haven't decided whether I'm going to use them or trade them out quite yet. I've already got more Beam Magnum rounds than I know what to do with. I made things a bit more difficult for myself by including both the Ver. Ka and OVA parts in the mix. 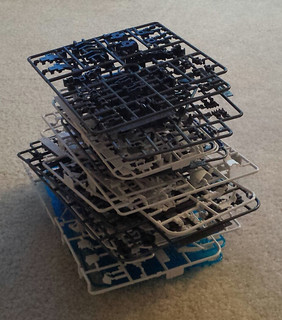 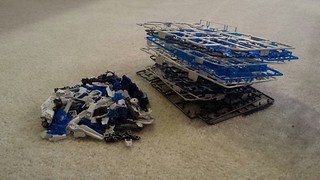 Kits look impressive in the box, on the runners, or completed. When they're just a pile of parts you begin to question how much money that lil pile cost.

To make things more interested I decided to take a time lapse video of the build process. I've always wanted to do take one but I often spread builds over multiple days. Taking one's time makes for a more relaxing experience. Shooting time lapses across multiple days introduces various issues with lighting, camera placement, all the little things that could break up what should be a seamless video. Now that I had everything prepped for a build I could do it all in one sitting. One, painful sitting. Here's how things turned out....

Pretty nifty huh? The build took about two and a half hours with a few breaks here and there to get up and stretch. My back isn't what it used to be and my hands even started to cramp up. Part of the issue was constant shutter on the camera snapping photos. Every five seconds it was shick-shick, shick-shick, shick-shick (or however you want to onomatopoeia a shutter). It was as though my efforts were being criticized by a very loud clock. It caused me to rush more than I would naturally and made it generally an unpleasant experience.

It added pressure which caused the build to go a lot poorly than I had anticipated. Puzzle builders out there will no doubt cringe at my lack of form. Where I had intended to sort out all the pieces by limb or location I only managed to get so far before feeling like I had to put something together. This lead to quite a few instances where I was pulling my hair out trying to find a piece, only to move onto something else or find it sitting right in front of me. To be honest I did reference the manual once but only because I thought I was missing a piece. I couldn't find something I knew I needed, was worried that I had somehow missed/lost that piece, couldn't find it on the runners, and had to make sure that something else wasn't missing (a piece was missing from the Unicorn I built a week or two ago).

Putting everything together was straight from memory, with a fair amount of trial and error. For the most part it was easier than I had initially anticipated. I had expected the legs and arms to be the most difficult parts since they've got the most complex construction but they went together with ease. Where I had difficulty was rushing through the chest. Again, that damned clock effect caused me to rush and not quite get the order of operations right at first. I also had a tough time trying to figure out the feet. There are two main components of the side-of-the-foot armor (for lack of a better descriptor), each going through a round section in the center of the foot. I couldn't quite get things to fit in like I expected because I had the locations backwards. I eventually figured that if it wasn't working correctly then I was probably doing something wrong.

In all fairness the process was made easier by A) having built another MG Unicorn a week or two ago and B) that there are no pollycaps on this kit. Sure building the same kit multiple times over the years helped but I never really thought to memorize the process. One of the things I like about the hobby is relaxing and taking my time. I much prefer going through the guide at my own pace, without worrying about missing pieces or the difficulty of finding them.

There we go, challenge complete! I even celebrated with a piece of cake at 11:30 PM while waiting for Aperture to export the 1402 still images captured for the video.