Mom blames manga, library, for putting her son into "home for extensive therapy" 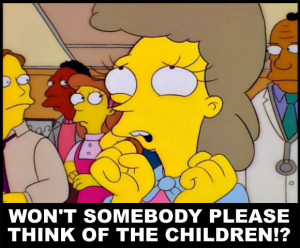 Looks like ignorant, irresponsible, parents are at it again...

Nothing makes me want to stab an innocent bunny like outcry from a group called Protect Our Children. Do us all a favor and actually raise your own children and leave everyone else alone. You're responsible for the development of your child and his understanding of the world around him. If some lousy manga is going to push him over the edge it's safe to say you've failed at your job of being a parent. Imagine what would've happened had he read American Psycho or bothered to read up on human history. As for the manga he was reading? Robot 6 @ Comic Book Resources reported that Barbaree mentioned the comics, "The Naked Suicide Girl," and, "Psychic Academy." Psychic Academy is mundane. Skimming through the first volume, there's some definite fan service, but no real violence or nudity. At it's worst, near the end, the main character trips into his love interest, only to accidentally cop a feel. Terrible, just terrible. Every measure should be taken to prevent young boys from encountering any knowledge of sexuality.

The Naked Suicide Girl is actually chapter three of the acclaimed manga, Gantz. The manga contains violence, nudity, and one hell of a story. The American distributor, Dark Horse Horse, clearly rates it for ages +18 and up. The synopsis?

In my opinion even Gantz isn't going to do enough to justify the need for "extensive therapy." I'm betting that the mom, after reading the manga, completely overreacted and forced her son into some program. Kids, when they get a hold of something like Gantz, love it. Nudity, violence, crazy story, it's the shit they go crazy for. Every guy with a childhood worth a damn remembers getting their hands on that first porno or rated R film. It's the same thing. Imagine instead, that upon finding that Playboy, decided that you were best sent to counseling. Ugh. Huge props for the city council and library for standing up to this madness. It's bad enough that some libraries ban books due to "objectionable" content. We don't need to make it worse via continual capitulation.