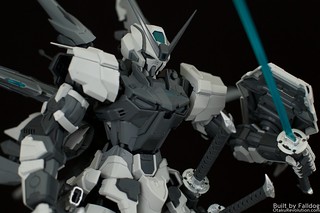 The Nillson Works “PG Astray with Backpack” isn’t exactly the fanciest name, but it’s clear someone wants to avoid the International Bandai Banhammer (IBB for short). I’m going to refer to it as the Astray Grayscale on account that the kit is 99% gray and white, with only a bit of silver and clear green accent pieces. I picked mine up from Sameul Decal for roughly $90 plus shipping.

The Astray is 1/60 scale, and called PG by Nillson, but a lot of the build is more like an upscaled MG than a direct copy of the official PG. It’s an interesting mix from both builds, along with a good helping of new design elements that help set it apart. As mentioned the kit is pretty much all shades of gray, and surprisingly, it works really well. Despite the lack of pizzazz it looks really nicely and there’s just enough shad separation to make it look nifty out of the box. The gray and general simplicity of the build will make it an easy go-to for folks looking to paint it up in custom colours. Personally I think it’ll look stellar with just some gold accents here and there. 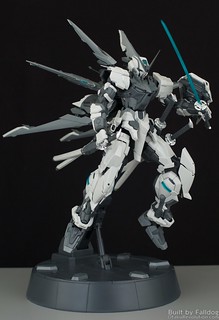 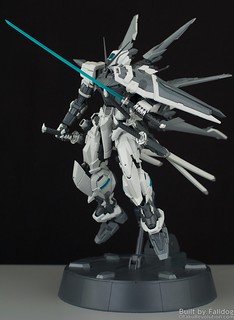 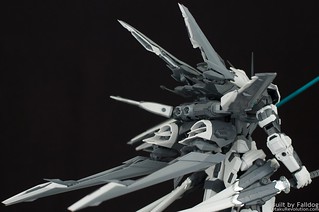 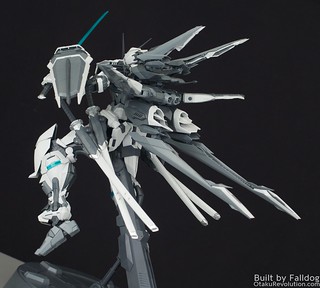 Inside the box - which is completely nondescript, no images, markings, or anything that might attract IBB attention - are roughly 50 runners, two instruction manuals (one for the main body and weapons, the other for the backpack and stand) and a set of stickers for the eyes. No decals.

For the weapons there’s the standard Astray shield and rifle. The are also four Gerbera Straight katanas. They’re not chrome like the ones from Bandai, but they do have the hamon markings. What’s interesting is that the gray of the swords are painted over top clear green plastic. So, if you’re like me and saw Nillson’s photographs with green katanas and were confused to find none in the box, that’s why. I tried to strip with my old mainstay, Purple Power, but an overnight soak did nothing. I then used a bit of lacquer thinner which cleared the paint but was a bit too abrasive on the plastic underneath. The one I stripped has a dull look and some sort of edge defect. It’s like the plastic in the thin edge split along the length but I can’t feel any physical defects. The net result is, instead of a clean looking green beam katana, I have something duller with the appearance of a chipped edge. 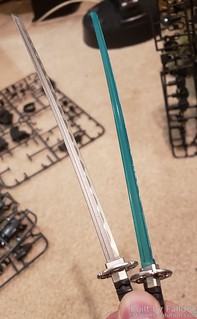 Two blades side by side, you can sort of see the weird edge damage in my photo. 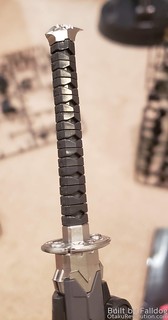 The handles on the swords are made of a whole bunch of different plastic peices giving it a lot of depth and a great look.

As one might expect build quality is not close to the Bandai benchmark, but thankfully it’s considerably better than Mechanicore and CubeCute. Fitment is generally good, but there are quite a few pieces that are just a bit too loose. There are also a few connection joints that are on the tight side, but better tight than flopping around. Net result is a few areas that don’t really fit together as cleanly as they should leaving visible gaps. The backpack and head are the worst, with the sides of the head prone to popping off when they impact the neck piece. A few times I did have to pull out the hammer or pliers to get pieces together. Most frustrating were the fingers, great, tight enough that they don’t fall open on their own, but my hands kept cramping in the attempt to assemble. Haven’t had to tape or glue anything for my straight build, but I have used a bit of poster putty to fill in a loose connection. When it comes to looseness, the hard points for the swords are the worst. They’re not really tight enough to support two sheathed swords in position. 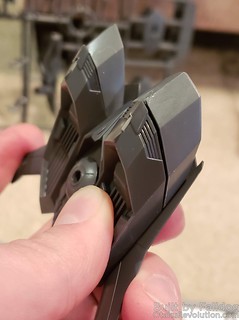 One of the more prominent gaps on the backpack. Easily fixed with a bit of modification at least.

It’s also worth noting that the promotional image with all four swords on one side of the kit must be some sort of custom work by the Nillson team. For the life of me I don’t see how they did it without additional pieces not included with the kit.

Plastic quality isn’t that great. It’s on the soft, waxy, side, which makes it easy to cut, but easy to warp. There are a few pieces that already show stress marks on the runner but none have been predominantly visible on the completed kit. The polycap rubber is super soft, the kind that if you clip the edge while putting a piece together it warps a bit and becomes a huge pain in the ass. The surface quality isn’t very refined either, as one might expect with low cost third party kits you can see all of the molds CNC marks. I don’t consider this a huge deal though, most of those marks aren’t really noticeable when looking at the kit as a whole and they’ll be easily lost under paint. 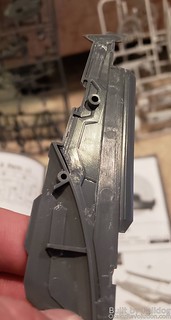 Mold marks on the underside of the wing.

These shoulder parts showed stress marks out of the bag. 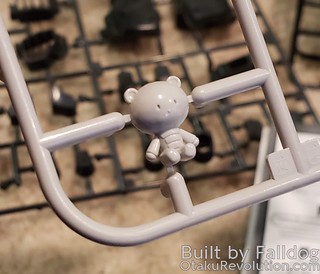 Small Beargguy figure that sits in the pilot's seat.

The last major criticism is the instruction manual. There are a few glaring issues, such as improperly counted runners, wrong piece numbers, or backward assembly instructions. There’s also no overarching “here’s how you put everything together” section. Quite a few times I’d have to take a look at Nillson’s promotional photographs to get an idea of how things are supposed to go together. In one photo they have the backpack mounted directly on the stand, something I still don’t know how to do. 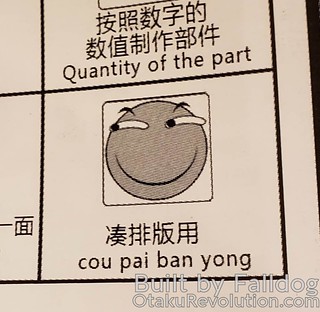 Apparently this icon in the manual means something along the lines of "stuff it in as hard as you can."

In general I really like this kit. Putting it together was simple enough and, despite the 2,359,756 different Astray releases out there, Grayscale stands out as its own thing. I like it a lot more than the HiRM Astray, which comparatively is smaller, would be less fun to paint, and more expensive. In general this would be a decent starting point for folks familiar with Gunpla who haven’t adventured outside of official releases. If you love the Asray design, and don't have one in 1/60 scale, get your hands on the official Bandai Red Frame first. 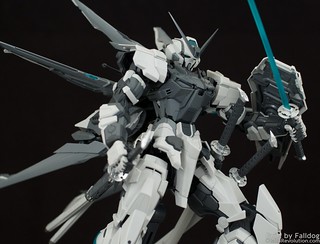