Over a year ago I set about putting my Gunpla models into a display case of their own. The intent was to not only display them properly but help protect them from the ever present threat of dust. This was the result. It was initially evident that I didn't have enough room for everything but lacking floorspace there wasn't much I could do about it. Since then I've been lucky enough to upscale my living conditions, and from that, my Gunpla display situation. Though, I'm not sure I have enough space now either. 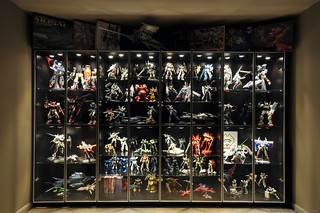 The shelves and everything associated with it are from Ikea.

Inreda Lights - $50 each, four lights per set (I'm using a total of eight), plus some associated cabling

While not exactly dirt cheap they're considerably less expensive than a traditional curio cabinet. I had some issues getting them all in place, most relating how they're resting on carpet. None of them seemed to rest perfectly aside one another so I had to secure them together at the top. Most noticeably, because of the surface I suspect, none of the doors line up perfectly from one cabinet to the next. They're not exactly designed to be easily adjustable with high degrees of accuracy so I did the best I could before giving up. In addition the doors never seem to meet up perfectly in the middle. My first one, and the additional three, all left an unsightly 2/3 inch or so gap down the the middle. To mask this and help make the cases more air tight I just applied some black weather stripping. Unfortunately they're far from air tight and I think I need to apply more weather stripping here and there. Since I set these up a few months ago the higher shelves accumulated a bit of fine dust. Far less than any other environment in my place but noticeable on the glass shelves. Hurray for dusting!

Here are a few photos of how it looks headed into 2014. I'm pretty much at capacity without it being too crowded. I did what I could to keep kits clustered together series or theme wise but there are a few odd exceptions here and there. There are a few non-model things here and there, like the Albion, Gundam: The Origin collection, and König Monster. The kits on top are unbuilt for one reason or another. I suppose as I add more kits I'll have to move the non-models and WIPs somewhere else. 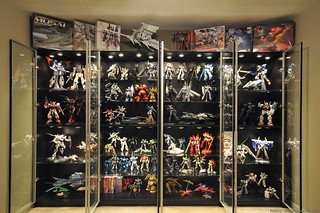 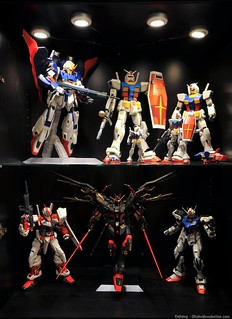 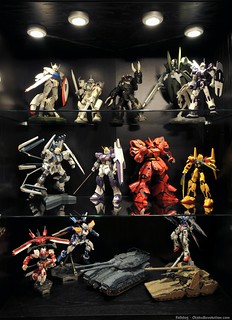 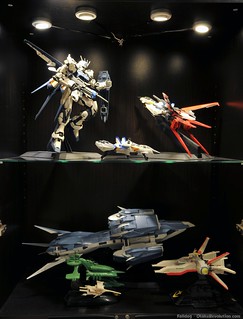 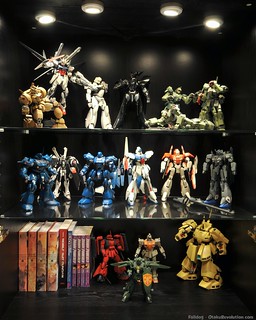 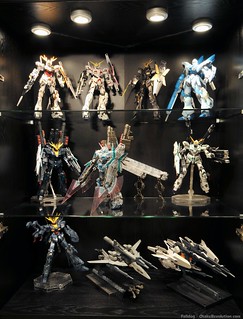 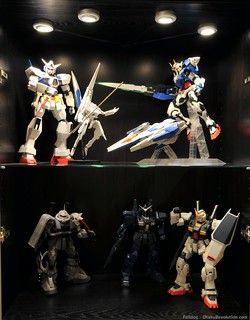 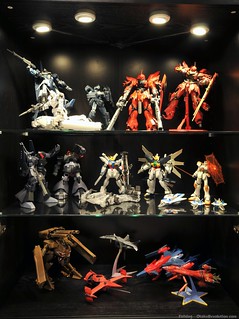 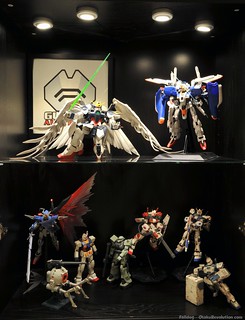 The vast majority of my model collection is housed in these cabinets. Only a few things, like my Metal Gear Rex, are elsewhere. Here's a full list of everything, top down, left to right. Where possible I linked them to a page on the build or an associated Flickr gallery. Kits are in various stages ranging from finished, to snap built, to somewhere in betwee. Most of the stuff on the lower shelves are WIPs.