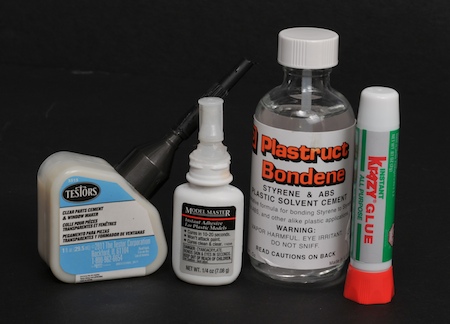 Now, 90% of the time, you'll be able to complete a kit without needing any glue. Unfortunately, that other 10% is filled with broken parts, loose joints, and extremely small pieces. There's quite an assortment of glues out there and picking the best one for the task can make life a lot easier, and make your kit look better. These all should be available at your local hobby shop, aside from super glue, which is available at grocery stores, pharmacies, gas stations etc.

Modeling cements are generally what comes to mind when folks think of modeling glue. They are usually clear and generally come in paste tubes, which often become a messy endeavor if you try to use it straight from the tube. Generally I don't recommend these types of glue. In my experience they're often too slow to set and aren't strong enough. If you must use them don't try and apply it directly from the tube, you'll just get it everywhere. Instead put a little bit in a dish or on a piece of cardboard (your gunpla's box will serve nicely). Apply using the end of a toothpick and hold the pieces tightly in place until set and let cure overnight.

From what I've read they also cause fogging (more on this later) and use should be avoided on anything but pieces awaiting paint.

Super Glue, Krazy Glue, or whatever brand name you know it by, are the strongest glues safe for modeling. Thanks to the small size of the applicators they can generally be applied directly from the tube directly to the parts in need. Hold in place and 10-15 seconds later it should be set enough that you can walk away and leave it to cure for 30-60 minutes. Since super glue dries hard I've used it effectively to close seam gaps prior to painting.

Unfortunately, super glue has its problems. To be more precise, it causes fogging. What is fogging you say? Well, have you ever seen a crime documentary or drama where they heated super glue to produce fumes in order to protect/reveal fingerprints? Well super glue will release those fumes (though on a smaller scale) as it dries. Depending on the surface near it those fumes may result in white fogging. Since it's essentially a thin layer of glue there's no real way to remove it aside from sanding. Here's a pretty extreme case of fogging.

I still use small amounts of super glue to tighten up joints though most on this page will work just as well. 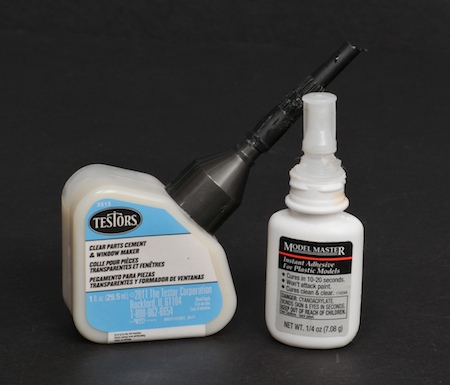 These are the best glues for us gunpla builders. Designed for detailing on larger model kits they work great for the small pieces on our projects that typically require this attention. Above are my two favorite glues, Model Master's Instant Adhesive and Testor's Clear Parts Cement.

Instant Adhesive is a lot like super glue without the constant risk of fogging (I want to say of all the times I used it there was a small amount of fogging once but for the life of me I can't remember when). It dries hard and clear and with the small applicator it's extremely easy to use. The only issue I have is that the applicator tends to seal itself up before I get around to finishing the bottle.

The Clear Parts Cement glue was designed in part so that it could be used for making windows and clear parts. It's more milky than the Instant Adhesive but dries clear. Additionally I don't think it's as hard so there's a bit of flex which is nice. The best part is that you can completely do away with the precision applicator. I just put a small amount in a dish and use a toothpick to apply where needed. 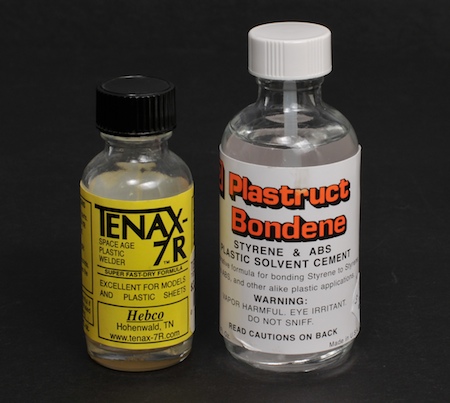 This is your hardcore glue and it's not really glue per se. What it does is actually melt the plastic just a bit, essentially welding the pieces together. Once it's on and dry, there's not really much you can do to remove the piece. Nothing pretty at least. There's not a lot of wiggle room either, they start working fast so be sure to commit before applying any. Simply brush it on lightly and hold your two pieces together tightly.

These solutions work best for pla plating and other custom work. I imagine they would work great for bonding seam lines but haven't tried it yet.