Before you start to paint, whether by hand or airbrush, it's important to prepare your workspace before hand. Proper prep will help keep your space clean as the project proceeds and help facilitate cleanup when it's all said and done.

I recommend getting some sort of reusable drop cloth to use while painting. I picked up a fairly large one from a home improvement store for a lot less than I would have thought. It's protected my floors against unexpected paint drops and particulates (see below). The best part is that it's washable, making it a lot easier to clean up than my carpet (which already has enough paint on it).

Cleaning Supplies at the Ready

Always have appropriate cleaning supplies at hand before you start. Paper towels, thinners, etc. Should something happen, such as knocking a jar over (which I've done), you'll want everything at hand instead of having to scramble and find something at the last moment.

It's also important to clean your equipment as soon as you're done using it. Proper maintenance will greatly extend the life of your tools.

The first time someone paints a kit via airbrush, or spray can, they usually don't notice the amount of paint particulate that dumps it into the air. The first time I painted indoors everything went really well until a month later when I decided to dust and found that nearly everything was covered in a nice shade of green. Thus I learned the importance of picking a good place to paint.

If you're using spray cans, paint outside. It's as simple as that and you don't want to worry about one hell of a mess. They produce too much excess particulates and fumes to be done cleanly inside. Typically I spray outside then return the pieces inside to a more controled environment while they dry. Airbrushing outside doesn't work as well but indoor use can be clean with the help of a paint booth.

There are several types of paint booths you can purchase online, as well as many guides for creating your own. Over the winter when it was too cold to paint outside I attempted something along these lines with a box fan and air filter. The fan, blowing air away from my set up, sucked air into a filter held on with bungee cords... While painting my PG Strike Freedom I shook it out and captured most of the particulate that fell out, take a look... 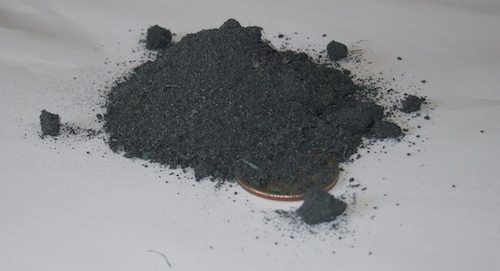 That's a quarter for scale. If not for the filter that all that, and more, would have settled all over my room. Since then, I've reworked my setup, placing a large box around the fan to help capture and direct the airflow. Behind the fan, I have drop cloth hanging to help capture anything that makes it through the (admittedly cheap) filter. Is it the most efficient one out there, far from it, yet it's very functional for my needs.